“Kim, you’re doing amazing sweetie.” Newly single reality television star Kim Kardashian is showing off a brand new approach to style amid a very public divorce from Ye, the artist formerly known as Kanye West. Kardashian has kept it both amicable and stylish all the way—and has transformed herself into a walking billboard for Demna Gvasalia’s Balenciaga and Rick Owens. Yes, after months of rumors and a tumultuous end to their relationship, it was confirmed in February that Kimye would become Kim and Ye. And ever since, Kanye has continued to publicly plead for reunification, while Kardashian has been sporting cutting-edge new outfits and has found herself a younger, tattoo-covered comedian boyfriend.

Gone are the days of the pre-Kanye bandage dresses and chunky belts, so too are the days of  monochromatic beige Yeezy-wear. Now, if it’s not all black head-to-toe, it’s a blindingly bright hue. Catsuits and opera gloves, feathers and fringe, leather and full-face masks, nothing has been off limits for Miss Kimberly Noel Kardashian. Making several style statements over the summer, Kardashian continued supporting her estranged husband by attending several listening parties for his album Donda with their four children in very unexpected ensembles, including that of a Balenciaga Haute Couture wedding gown featured in one of West’s performances.

The reality star attended the 2021 Met Gala alongside Balenciaga creative director Demna Gvasalia—shrouded entirely from view. There’s something to be said about the total anonymity of her ensemble—whilst somehow remaining completely recognizable. Since then, the “Balenci Baby” has worn the designer’s creations almost everywhere she goes, specifically to her Saturday Night Live hosting gig in October.

With her futuristic laser beam shades and bodysuit ensembles, Kardashian could easily double for a character in The Matrix or a cartoon ninja. She wore a pitch-black Rick Owens Spring/Summer 2022 number to Paris Hilton’s wedding and a deep amethyst Balenciaga catsuit to Simon Huck’s rehearsal dinner. Last week, she was dubbed a “Fashion Icon” at the People’s Choice Awards, where Kardashian appeared on the red carpet in custom Balenciaga (surprise) and said, “This is like a dream that I get to wake up and wear these amazing clothes and try new things and take a risk. I’m so humbled.”

As Kardashian begins to cultivate and define her post-Ye style identity, it’s clear these avant garde designs she’s been photographed in over the past few months represent a metaphorical palate cleanser or rebirth. Here, GRAZIA combs through the greatest looks of Kim’s new era. 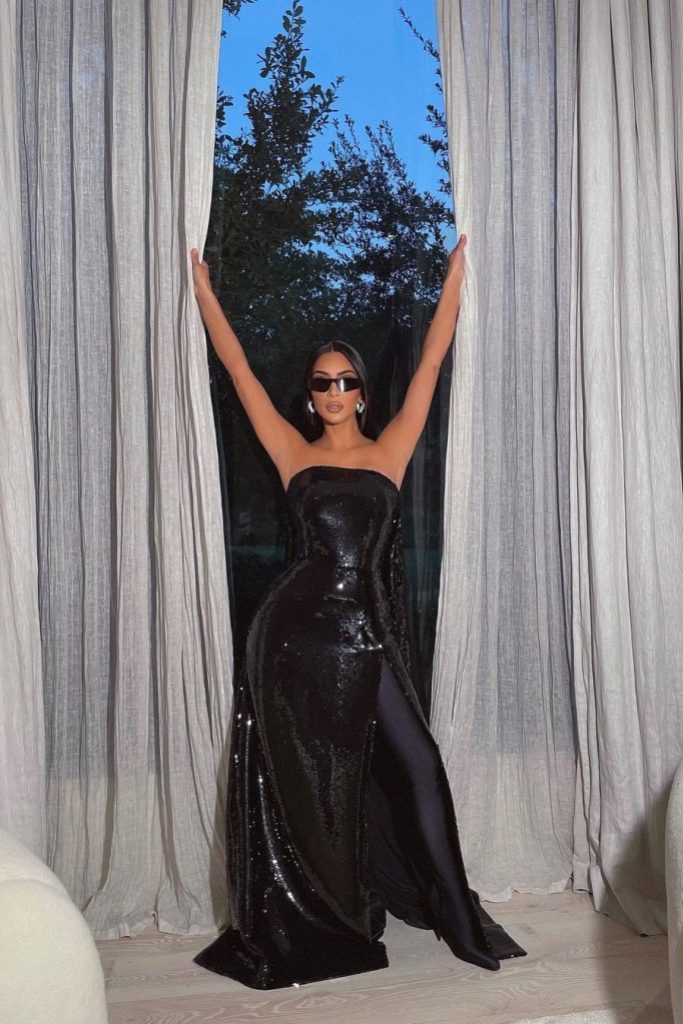