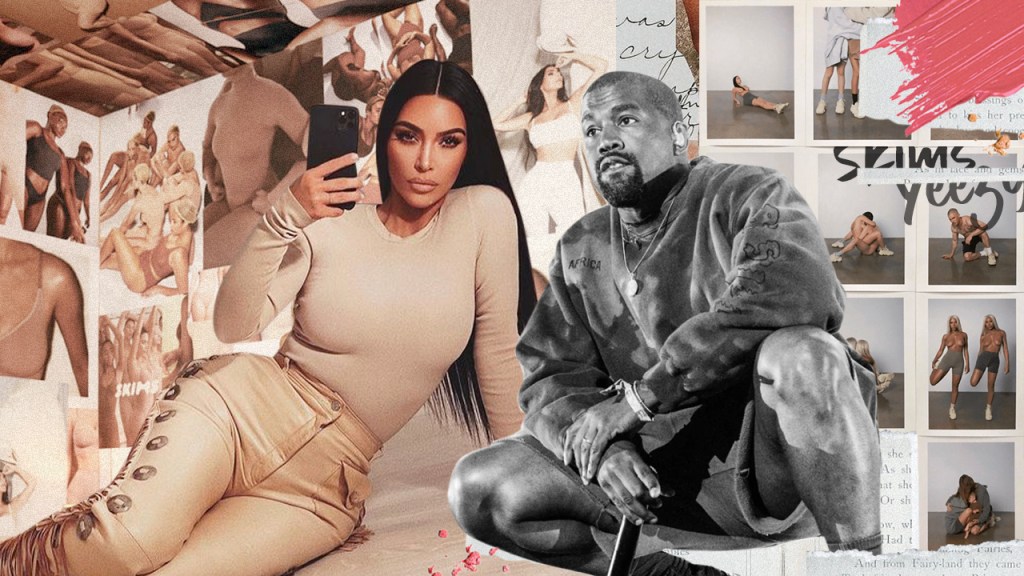 Reports of Kim Kardashian and Kanye West’s impending divorce were put on hold earlier this month, as the US grappled with a profound political crisis (memes portraying a furious Kris Jenner, whose carefully orchestrated plan for the divorce reveal had been undermined by MAGA insurgents at the Capitol, circulated wildly). According to new reports, the couple are putting an official announcement on hold for now, saving the details of the breakdown of their marriage for the upcoming final season of Keeping Up With The Kardashians (a surreal sentence if we ever wrote one), which won’t air until September. Regardless, the couple—who married in 2014 and share four children—seem to be living separately, meaning the defining celebrity partnership of our era may soon come to an end.

The union of Kim Kardashian and Kanye West always represented something greater than the sum of its parts, a fact both parties always seemed acutely aware of. Much like how the romantic partnering of Jay-Z and Beyoncé doubled as a savvy branding exercise (he brought her prestige and credibility, she brought him mainstream appeal), Kim and Kanye’s relationship was fortuitously timed and beneficial for both parties. In 2012, when the pair got together, Kardashian was already one of the most famous women in the world, but was still circulating the fringes of the fashion industry, failing, in her bodycon and fur gilets, to penetrate its high walls. West, fresh off the back of the release of his decade-defining record, My Beautiful Dark Twisted Fantasy, was considered one of the most important recording artists in the world, but rap, at the time, didn’t have the mass cultural appeal it does today. Their love story—West had reportedly been in love with Kardashian for years—was also an undeniable masterclass in the art of aligning star power.

Soon after the pair got together, West, a longtime disciple of the world of high fashion (he interned at Fendi in 2009), famously took it upon himself to overhaul his future wife’s style. Kim swapped her favoured ripped jeans and tight pencil skirts for tonal separates and sharp tailoring and brand—certainly swayed by the potential access to West—slowly began to embrace her. Before 2011, the Kardashian sisters milled around Bryant Park, trying to get photographed at New York Fashion Week. By 2015, the newly-married Kim was perched beside Anna Wintour to sit front row, with baby North West nestled in her lap.

West’s sartorial intervention is undoubtedly what caught the attention of French fashion doyenne Carine Roitfeld, who was among the first major industry figures to back Kardashian, shooting her for the cover of her biannual fashion tome CR Fashion Book back in 2013. A year later, American Vogue came knocking, and the resulting cover—in which Kim and Kanye posed in wedding attire—continues to be one of the most polarising in the magazine’s history. That cover represented a fundamental shift in the relationship between pop culture and high fashion. A few years earlier, it would have been unimaginable that a reality TV star could grace the pages of a glossy fashion magazine. The future reign of this generation’s supermodels—Kim’s sister Kendall Jenner, and her Real Housewives of Beverly Hills alum girlfriends Gigi and Bella Hadid—would arguably never have happened if it weren’t for the initial legwork put in by Kardashian and West.

As Kim ascended the ranks of the fashion world she took the rest of her family with her. Kendall became the highest-earning supermodel of our era, gracing the runway for Chanel, Versace, Burberry, and Fendi. The five sisters posed for a Calvin Klein campaign, Kourtney has sat front row at Haider Ackermann and Balmain, and Kylie Jenner is a long-time friend and collaborator of Alexander Wang’s. All the Kardashian sisters, bar Khloé, have graced the cover of Vogue, and Caitlin Jenner famously appeared on the cover of Vanity Fair in a custom Versace bodice in 2015. Where once the notoriously exclusive fashion world looked down its nose at the world of mass entertainment, it now accepted it with seemingly open arms.

The arrival of the Kardashians on the fashion scene spoke to bigger cultural questions, too. Kim has had her fair share of warranted criticism for perpetuating unrealistic body standards, but there’s no denying that her so-called ‘curvy’ figure has drastically altered our generation’s beauty ideal. It certainly didn’t spearhead our current body acceptance movement, but it forced the fashion world—obsessed with a certain kind of lanky, adolescent androgyne—to consider the appeal of a different type of body. Kim’s masterful command of the paparazzi, no doubt learned from the years she spent watching former BFF Paris Hilton, had a sprawling effect on the fast fashion industry, too. Kardashian became quickly aware that appearing in a constant barrage of different outfits was the key to remaining relevant (even during a pandemic she’s worn a rotation of custom designer looks, despite being confined to her house)—the trickle-down effect of these chameleonic transformations was huge. The Kardashian’s outfits are often being copied and sold by hyper fast-fashion retailers within hours of their wearing them.

Kanye’s arrival on the fashion scene was equally important, marking a drastic change from the largely white and European faces that had dominated that world since its inception. Though he wasn’t the first, nor the best Black designer to grace the New York Fashion Week schedule, Yeezy became an undeniable cultural moment—taking the rising trend of aspirational streetwear and catapulting it into the mainstream fashion conversation. West’s work with Yeezy precipitated a drastic shift in the culture—and it’s worth remembering that Beyoncé’s Ivy Park, Rihanna’s Fenty, and Drake’s OVO, all came in the years directly after Yeezy launched. The rise of Virgil Abloh, now the creative director of menswear at Louis Vuitton (the first Black man to hold that role at a luxury French fashion house) was undoubtedly bolstered by his relationship with West.

The legacy of the Wests is a domino effect that will continue rolling on and changing shape, whether their marriage ends or not. That legacy is complicated and still difficult to fully make sense of—to call it simply ‘good’ or ‘bad’ would be to miss the point entirely. What we do know is that Kim and Kanye will be to the 2010s what Britney and Justin were to the ’90s and Brad Pitt and Angelina Jolie were to the ’00s—the A-list couple that encapsulated a specific moment in our culture. That cultural moment will be remembered for a whole spectrum of things—expensive sneakers, shapely derrieres, contouring, and bike shorts, but also as the moment where rap exploded, where social media transformed society’s power dynamics, and where fashion finally came to acknowledge the depths of its race problem. On the balance of things, it seems that the good outweighed the bad—but perhaps we’ll need a few more years of distance before we’ll be able to see this moment clearly.