“She is a number. She is a personality,” Lagerfeld told US Harper’s Bazaar. “She has nothing to do with a tall model but people are more interested in her than in models. I think it’s an interesting phenomenon of our days.”

But the 82-year-old wasn’t finished there.

“She carries herself so well. It’s everything people don’t expect in fashion. But she knows how to manage it. It’s a very special silhouette. Her skin is beautiful. In a way she is very seductive.”

Roitfeld was also asked for her opinion on Kim, and the CR Fashion Book editor said she felt the wife of Kanye West had ushered in a new era of high fashion for curvy women.

“Kim had something very interesting because she created a new shape of the body. For me, I’m so skinny and so small, it’s what excited me—to see someone with such a shape and a body. I like her and I think she’s very comfortable in her body.”

She also gave a nod to Kim’s mum Kris Jenner.

“I think there’s a controversy about [Kim], but something we can say to Kris, her mother, is that she was very well raised and very well educated. This is very important for me.”

Manners and etiquette: always a sure-fire way to impress the French. 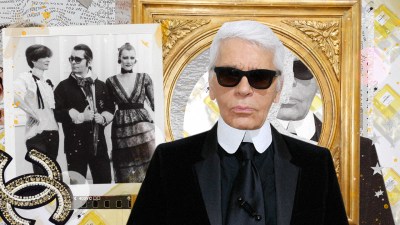 Two Years On, Karl Lagerfeld Is Still “The Holy Grail”
Next page