Just try and look away

Pete Davidson and Phoebe Dynevor made their public debut as an item at Wimbledon at the weekend. Photographers swarmed the affectionate couple in the stands as Roger Federer and Cameron Norrie battled in out on the court below.

On March 23 reports surfaced suggesting the pair were dating. By April a source told Page Six it wasn’t that serious. Fast forward three months of loved-up bliss and the couple are still going strong.

The 27-year-old comedian has always had a penchant for court-side PDA. If anything this last outing is reminiscent to the short fling he had with 47-year-old Kate Beckinsale. The duo were spotted attending a Rangers game at Madison Square Garden in 2019 while participating in some very passionate PDA. Naturally, the images sparked a slew of memes.

Davidson has a long and complicated dating history. He was famously engaged to Ariana Grande before a very messy and public split. This also dated Beckinsale, actress Margaret Qualley and model Kaia Gerber.

As they say, you live and you learn and speaking on his new relationship in an interview, the SNL star says he has learned communication is the key to a successful relationship.

“I am just very, very honest,” Davidson said. “I think what a lot of people do is they try to put on—not even their best self—but almost a version of themselves that they would like to be. And eventually, that will unravel, you know? So, I just, off the top, I’m like, ‘Hey, I’m nuts. Here’s all my issues. Here’s what I do. Here’s the therapists. This is what happens.’ And that can either be a lot for someone…or they could be like, ‘Cool, that was really refreshingly honest.’ Or, sometimes it can be a little intense and weird and people can’t handle that stuff.” 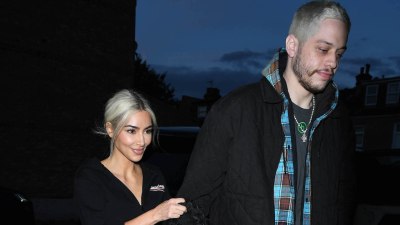