Sweeney arrived on the red carpet in a forest green velvet vintage 1981 mini dress by Thierry Mugler, featuring a sculpted, pointed bust, dramatic puff sleeves, a cinched belt at the waist, and a ruffled peplum. Styled by Molly Dickson, the 41-year-old frock was sourced from New York Vintage. The late designer was known for his surreal and avant-garde designs, and pieces from his archives have seen a resurgence with the likes of Cardi B, Kim Kardashian, and more sporting his work.

“At last night’s HCA Awards,” Dickson wrote on Instagram. “Syd really envisioned a vintage dress for this event and after lots of research we found this 1981 @muglerofficial from @newyorkvintageinc and then paired it w some @jimmychoo 👠 + @debeersofficial 💎.”

They chose a pointy-toe pair of Jimmy Choo pumps with metallic cap-toes, and De Beers jewels, including a tennis necklace, bracelet, tear-drop earrings, and a whopping diamond ring. With her blonde hair styled in a low chignon, celebrity hairstylist Glen Coco Oropeza left a few tendrils framing her face.

Calling to mind a look we’ve seen before, Sweeney’s dip into the archives reminded us of Maddy Perez’s (Alexa Demie) fashion montage scene in season 2 of Euphoria — who also sported a similar vintage Mugler look.

In the second episode of season 2, titled “Out of Touch,” Maddy babysits for an outrageously wealthy family and sneaks into the designer-filled closet of the child’s mother (played by Minka Kelly). Maddy admires the collection and puts on her very own fashion show, trying on the designs.

Snapping selfies and waving to imaginary adoring fans, Maddy slips in and out of vintage creations from Dior, Valentino, Norman Norell, and a sculptural velvet Mugler confection from Fall/Winter 1991. Named the Kessler gown, the pointed bust-line and voluminous puff sleeves have strong similarities to Sweeney’s 1981 red carpet chocie. 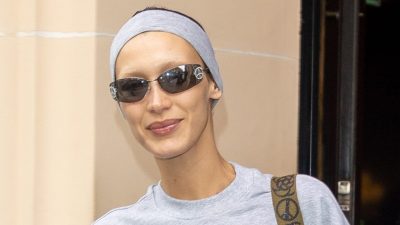