Remember the vintage purple mermaid gown Maddy Perez loved this season? Alexa Demie paid homage to her character in a dress by the same designer

Like many of her Euphoria co-stars, Alexa Demie‘s red carpet style is just as interesting to watch as the HBO hit series. And last night, she stepped out alongside other cast members in an ensemble that had a sweet connection to her on-screen character, Maddy Perez.

Demie walked the red carpet at the show’s HBO Max For Your Consideration event in L.A. on Wednesday in L.A. on Wednesday in a slinky black 1970 Norman Norell number. Demie fully committed to the vintage feel, with her impeccably curled, slicked coif resembling that of the popular flapper hair ‘do, the Eton crop, à la Josephine Baker.

Who could forget Maddy’s vintage fashion montage in her boss’ palatial closet? Maddy was able to find some solace from her turbulent home life and abusive relationship by dressing up in Samantha’s collection of archival Christian Dior, Valentino, Thierry Mugler, Chanel, and of course Norman Norell, with Judy Garland’s “Come Rain or Come Shine” blaring in the background.

The Norell gown served as a conduit for Maddy’s character development and personal growth this season as she planned to move on from East Highland. After Samantha gifted the dress to Maddy with the note, “don’t look back,” it symbolized both who Maddy hopes to be and eventually, who she decides to become.

In a behind-the-scenes special that aired after the HBO show, Enter Euphoria, Demie explained, “My friend Brynn came in and helped us set design with all her clothing, because she just has the most beautiful clothing. She came in and brought a bunch of stuff from her shop. She owns Aralda Vintage. It was like my dream closet. We had a lot of vintage couture gowns and that was so fun. Like, walking in, and being able to try on all those gowns was definitely a highlight.”

Demie actually wore the vintage Norman Norell piece, featuring a triangular back cutout and semi-sheer iridescent sheen, on what would have been the designer’s 122nd birthday, April 20.

In his career, Norell gained a reputation for dressing the likes of Lady Bird Johnson, Lauren Bacall, and other   glamorous socialites and Old Hollywood starlets. Today, he’s remembered as an important designer in American fashion the 20th century, earning the title, “the American Balenciaga.”

We hope Bivens, Jones and Demie all have more vintage moments up their sleeve for season 3. 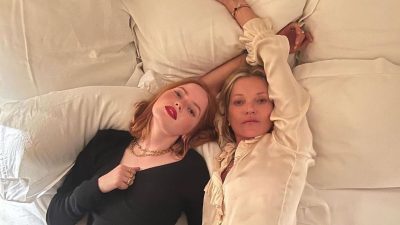