Forget Instagram posts and Facebook statuses, in the land of celebrities pregnancy announcements are done a little different. There is Blake Lively who’s signature is an unassuming red carpet while Rihanna apparently opted for a Chanel-fuelled photoshoot. But is there anywhere more iconic than the Saturday Night Live stage?

At the weekend Keke Palmer took to SNL with her opening monologue to address ongoing rumours that she’s pregnant – in the best way. “I’m especially glad to be here though, because there’s some rumours going around,” Palmer told the audience. “People have been in my comments saying ‘Keke’s having a baby,’ ‘Keke’s pregnant,’ and I want to set the record straight. I am!”

The comedian and actress opened her floor-length coat to reveal a baby bump. The 29-year-old first sparked pregnancy rumours in November when she appeared on the CFDA awards red carpet wearing a voluminous Carolina Herrera ball gown.

“I’ve gotta say though, it is bad when people on the internet spread rumours about you, but it’s even worse when they’re correct,” she continued. “I was trying so hard to keep it on the down low, because I’ve got a lot of stuff going on. People kept coming up to me [saying] ‘Congratulations,’ I’m like ‘Shh! Can y’all stop, I’ve got a liquor sponsorship on the line. Let the check clear, then we can get to the damn baby shower.”

On a more serious note she added, “But honestly this has been the biggest blessing, and I am so excited guys – I’m gonna be a mum!”

Palmer is pregnant with her beau Darius Jackson who she started dating in 2021. The couple met each other through Jackson’s brother Sarunas Jackson who worked on the set of Insecure. The actress guest starred on the television show. Speaking to Bustle in March, Palmer said she was the “happiest” she’s ever been with someone.

If this is the beginning of her pregnancy fashion, we can’t wait to see what’s next! 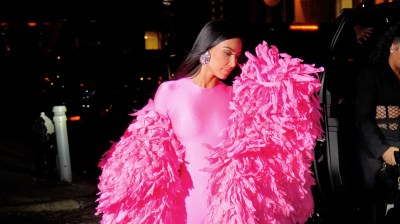