The actress is seeing sweet success with her new wine collaboration with Invivo X, SJP 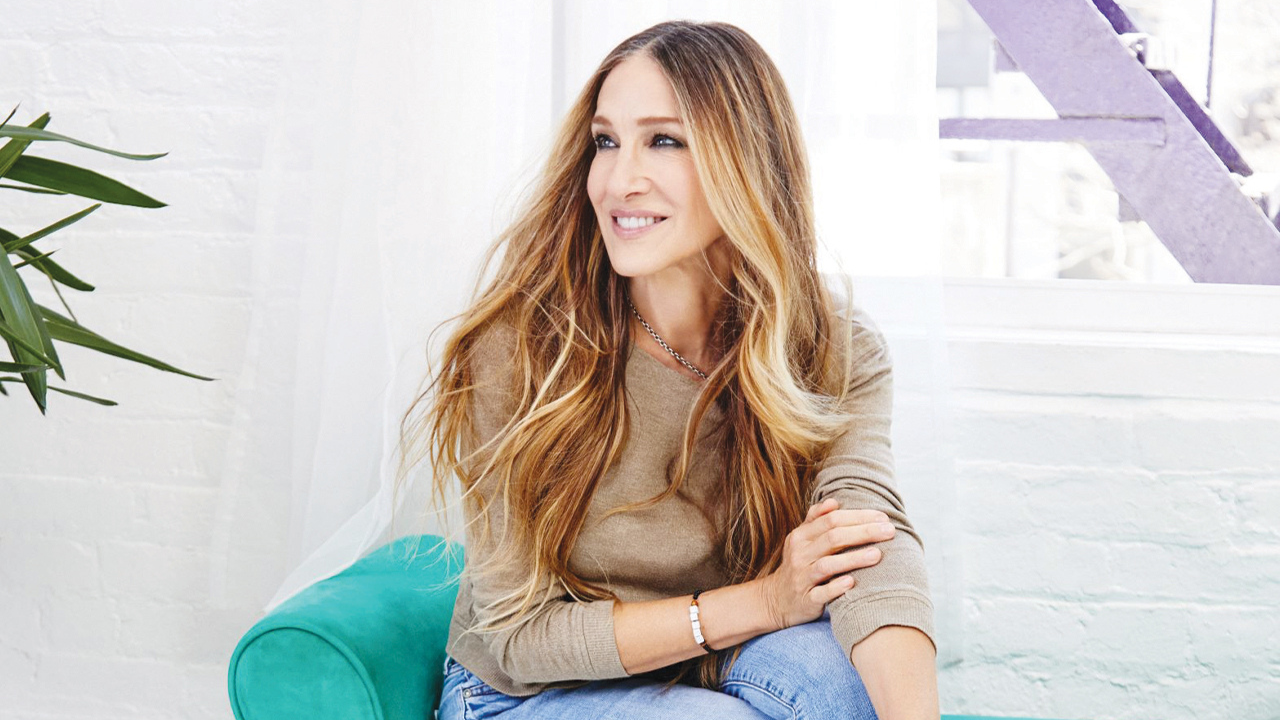 Nothing evokes the feeling of being at New York Fashion Week quite like the scene from the Sex and the City movie. You know the one. Samantha Jones flies in from L.A. to attend a show with Carrie Bradshaw, Miranda Hobbes, and Charlotte York Goldenblatt. As they slip and slide along the snow-covered sidewalk making their way into the tent at Bryant Park, Carrie says the now-famous quote in a voiceover: “Every spring the women of New York leave the foolish choices of their past behind and look forward to the future… This is known as Fashion Week.”

Once they find their front row seats and the lights dim and “New York Girls” starts pumping, Carrie memorably comes out of her post-break-up blues and gets rejuvenated by her first love — fashion. “I didn’t know if it was the fashion, or the fact that the four of us were together again, but for the first time in a long time, I felt like myself.” Leave it to TV’s favorite fashionista and relationship writer to precisely sum up the energy fashion week brings. There are many more runway moments fans will recall from the show, but part of what makes them so memorable is the person playing Carrie: Sarah Jessica Parker.

Carrie redefined what it meant to be a 30-something woman in the first decade of the 21st century. While Sarah Jessica perfectly captured the zeitgeist of turn-of-the-millennium New York dating, friendships and career-relationships balance on screen, she was living quite differently than Carrie off screen. Before filming on the first season of Sex and the City had even begun Sarah Jessica had already settled down in cozy domesticity with husband Matthew Broderick; by season 4 in 2002 the couple had become parents to first child James. Twin daughters, Marion and Tabitha, followed in 2009, and the family have since divided their time between their Greenwich Village townhouse and a second home in the tiny village of Kilcar, in rural County Donegal, Ireland, rarely giving interviews and remaining fiercely guarded about their private lives.

“I’ve always said one of the reasons we’ve had success is because we don’t talk about our marriage,” she said recently. It’s all a far cry from the ultra-glamorous, chaotic lifestyle of Sarah Jessica’s fictional alter-ego – and a world away from the whirlwind of dating and relationship dilemmas that saw the original TV show followed by two Sex and the City movies, and the current reboot, And Just Like That.

It would have been easy for the actress, now 57, to be content with the huge success of SATC, but even as the character she portrayed became an icon, in real life Sarah Jessica has spent the 24 years since the show’s debut quietly establishing herself as one of the country’s savviest and most ambitious businesswomen.

The year SATC wrapped in 2004 was when Sarah Jessica signed a record-breaking $38 million multi-season contract with the Gap – a move that raised eyebrows, but also cleverly combined the aspirational high-fashion of SATC with the affordability of the mall chain. That was followed in 2005 by her own fragrance line, the Lovely collection.

During this time, she was also capitalizing on her bouncy curls and blowouts she sported as Carrie Bradshaw with a lucrative Garnier haircare deal. In 2014, she found her footing by merging affordability with excellent craftmanship in the creation of her signature shoe brand, SJP.

If the Gap contract was clever and the perfume collection a no-brainer, the move into footwear was borderline genius. As Carrie Bradshaw, she had a $40,000 shoe collection (yes, Carrie did the math in an episode when she couldn’t afford her apartment). Now, fans would have a way to follow in her footsteps — literally.

“There is no SJP collection in Carrie’s world; I don’t exist there because that would be too weird for me,” she revealed. “I didn’t want it to look like I was exploiting a business opportunity and HBO either, but as we were approaching my first fitting in May of last year, it became clear that there were still some holes [costume designer] Molly Rogers wanted to fill in terms of the accessories.”

As well as the flagship New York boutique, SJP now boasts a further nine stand-alone stores worldwide as well as a recently-launched e-commerce website. Shoes, perfume and clothing are all very on-brand for the character – but they are also fine examples of how to leverage artistic recognition into a successful business.

“When I became involved in the world of fragrance, for instance, which had a whole new set of roles, which is a ridiculously competitive business, I think I discovered, really much to my surprise, that I connected to business,” she said in 2016. “I connected to margins and profits and what used to seem [like] very complicated conversations to me, all sort of were illuminated and I loved them. I loved being responsible to and for companies. I loved working hard to be deserving of the time and the money that was put into launching a fragrance. I had no idea that I would respond to business that way.”

Ever since she was bitten by the business bug, she hasn’t stopped. Her latest venture is a partnership with New Zealand winery Invivo Wines, and the release of an award- winning Sauvignon Blanc, Invivo X, SJP. Although the actress and Invivo co-founders Tim Lightbourne and Rob Cameron first collaborated in 2019, the launch of their fourth vintage is also the first in which they came together at the Baccarat Hotel in N.Y.C. to blend the wine in two years, due to COVID-19 restrictions.

“I feel fortunate that I was able to meet Tim and Rob in person after two years apart,” she says – also pointing out that the collaboration is not in name only: She has a real input into the finished wine. “We were looking to build on the quality of our previous vintages and are thrilled with the result. Each of the base wines had great personalities so combining them to create something special took some work at the blending table.”

Her partnership with Invivo Wines is just another example of her very smart business acumen and understanding of the market. The collaboration came before a wave of actresses partnered with alcohol brands and New Zealand Sauvignon Blanc is currently the hottest choice of wine for Americans – nearly one billion glasses have been consumed n this country over the last two years alone.

This spring, even as she was working on the Invivo Wines blend – and acting as executive producer on And Just Like That – Sarah Jessica announced yet another venture, the book imprint SJP Lit, with independent publisher Zando.

The project is certainly less directly related to Carrie… though given the SATC character was, after all, a writer, the ties, though subtle, are there.

Zando described the books to be released under the imprint as “sweeping, expansive, thought-provoking, and big-hearted literary and commercial works,” and Sarah Jessica herself added: “I make no secret of my devotion to books, the necessary role they play in my life and my endless admiration for authors and storytellers. So it’s simply a dream come true to have the opportunity to participate in the discovery and support of extraordinary new voices… a task I don’t take lightly and will tend to fiercely.”

The only question is how she fits it all in. Production of the new season of And Just Like That begins in the fall, as well as a reprisal of her role in the sequel to cult comedy classic Hocus Pocus. She also recently returned to Broadway with husband Broderick in a revival of Neil Simon’s comic drama Plaza Suite – the first time the couple had shared a stage together in nearly 30 years.

When asked if balancing so many jobs ever gets tiring, Sarah Jessica said, “Sometimes. I can’t complain.”

What keeps her engaged is her drive for excellence and being able to do something she thoroughly enjoys. “In terms of business, I don’t have the constitution to just let someone else do it and then I look at it. I have to be there deconstructing it, splitting the atom because I just love it,” she said.

When Sex and the City burst onto our screens in 1998, Sarah Jessica was 33 years old – an age when many actresses begin to feel nervous about the direction their careers might be taking. But if that show was intended as a celebration of women in their 30s and 40s, it has been the decades since she took the role that she has grown into one of the most dynamic and diverse female role models in America today.

As part of the recent inclusion in the TIME 100 Most Influential People in the World list, the magazine described her as “a giant – as a performer, producer and businesswoman.”

And Sarah Jessica herself believes that it is partly her age – and the experience that comes with it – that drives her success.

“You want to be the person with the most experience who is a leader or relied upon as a professional, as a friend, as a wife, as a partner,” she says. “That only comes with time spent living.”

By Colleen Kratofil and Dominic Utton