Catch up on the most talked-about outfits from NYFW 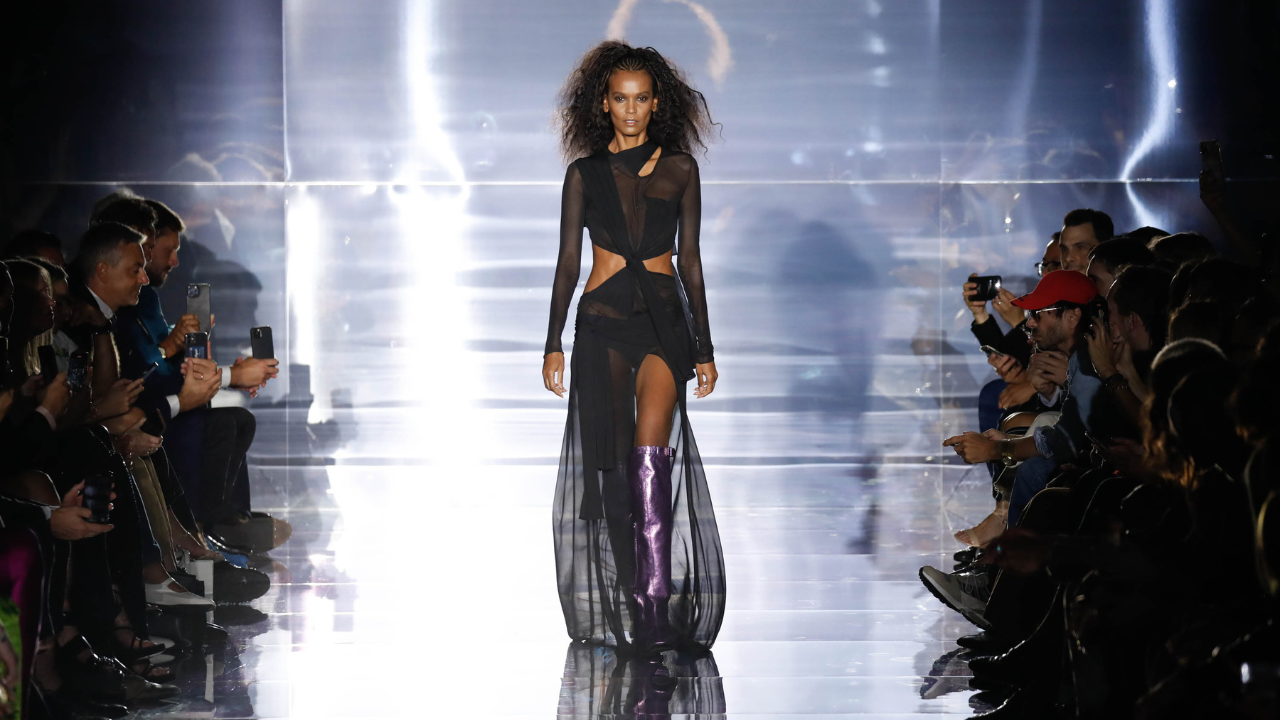 The Spring-Summer 2023 New York Fashion Week season is in full swing. As the kick-off to fashion month, New York City is stirring up an excitement that will set the precedent for the other three cities to follow.

This season there are over 100 brands on the official schedule, including Area, Tommy Hilfiger and Tom Ford, making their way back to the coveted calendar. Italian labels such as Fendi and Marni hopped across the pond to jump in on all the action.

Many brands are celebrating significant milestones, including Proenza Schouler which kicked off the week with its 20th anniversary, Fendi celebrated 25 years of the iconic Baguette bag, and Puma’s ringing in 75 years. Even with Tommy Hilfiger’s rained-out show, giving Alexander McQueen’s 1999 show a run for the wettest fashion show ever — fashion still prevails, and oh, is it good.

Ahead, check out the best runway looks from the Spring-Summer 2023 shows and come back throughout the week for updates.

Tom Ford brought the glitz and glam to fashion week. He closed out the week with a collection filled with sequin and glitter. Models Gigi Hadid and Bella Hadid hit the runway in sparkling gowns paying homage to the ’70s disco era.

Designer Edvin Thompson’s “Homecoming” collection is his first since receiving the CFDA Emerging Designer of the Year Award and his second NYFW runway show. The styles reflected his Caribbean heritage and diverse upbringing between Atlanta, New York, and Jamaica, and were the deepest nods to his roots that we’ve seen yet. For example, “I heart TP” shirts bedazzled in rhinestones resemble “I Heart NY” tourist tees. 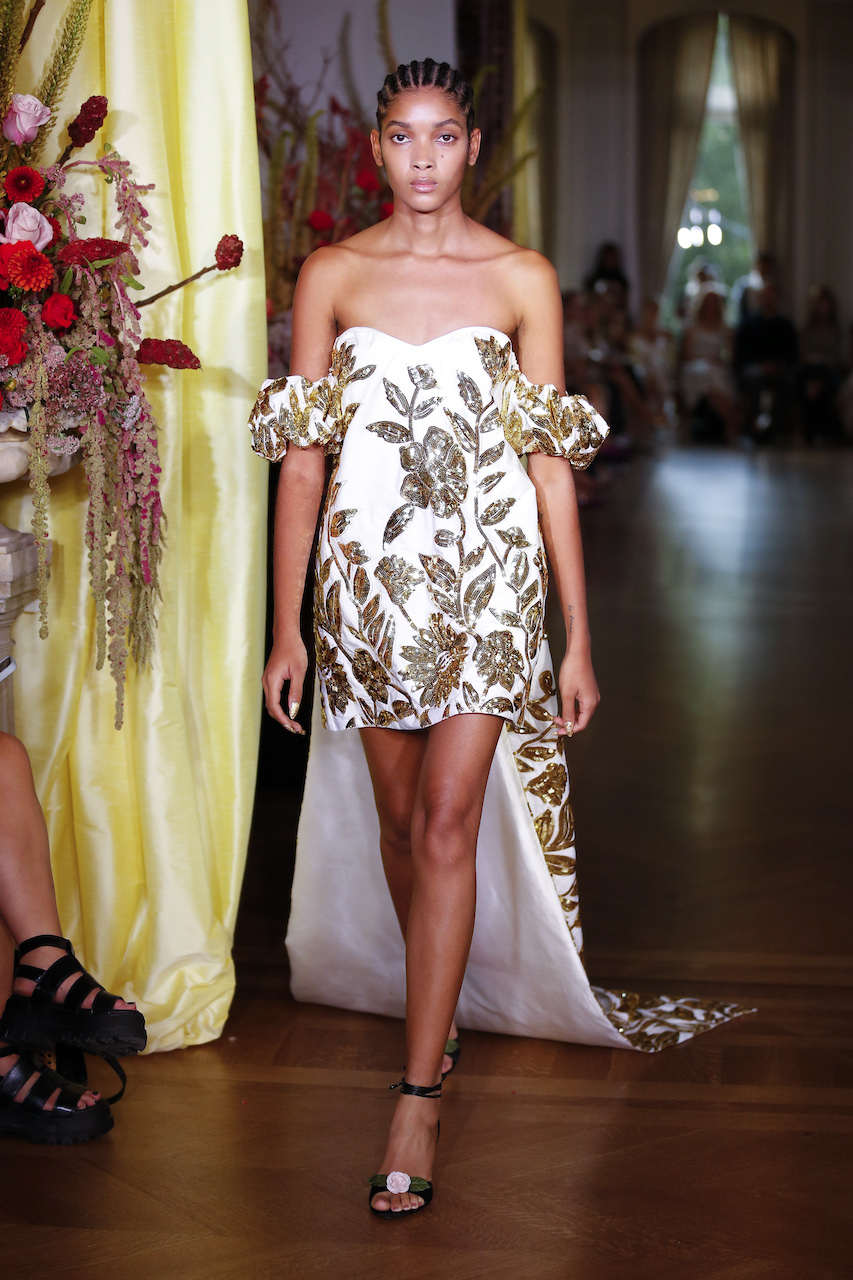 Elegant romanticism and modern grace were perfect descriptions for designer Alexandra O’Neill’s SS23 collection. Inspired by renaissance paintings, O’Neill paraded regal gowns embroidered with florals down the runway; some models even wore tiaras to tie into the gilded theme.

Designer Jason Rembert, known for his styling A-listers including Lizzo, Queen Latifah, Mary J. Blige, Rita Ora, and more, had a special story behind the bold and brightly-colored designs in his Spring/Summer 23 collection. Rembert recalled all the love and kind words spoken about his mother, Louisiane Aliette, who passed away 11 years ago, and it made him think about why people wait to say beautiful things about people until their funerals. 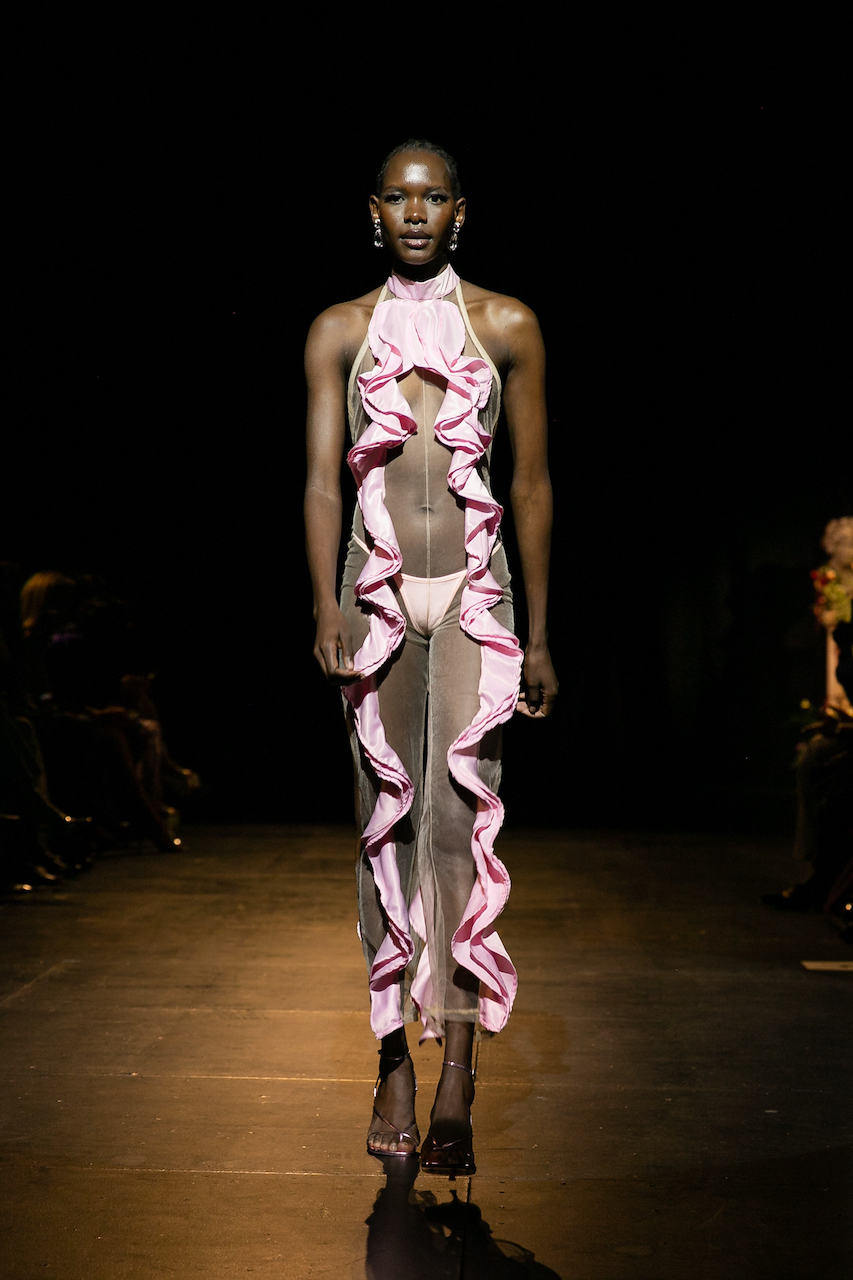 At 25, Adeola returned to New York Fashion Week with new stories to be told through her garments. Bringing back the iconic energy of the ’90s runways, Adeola presented 35 looks, including five menswear styles inspired by the Victorian era and the late designer Thierry Mugler. “I always envisioned myself as a burgeoning couture designer, which holds more weight than ever for me now with the death of the iconic Thierry Mugler,” the designer wrote in her show notes. “I was a drama scholar in high school and mirrored [Mugler’s] love for film noir – the wealth and glamour when it comes to apparel deeply resonates with me and I intend to give a tribute to that and to him in this collection.” 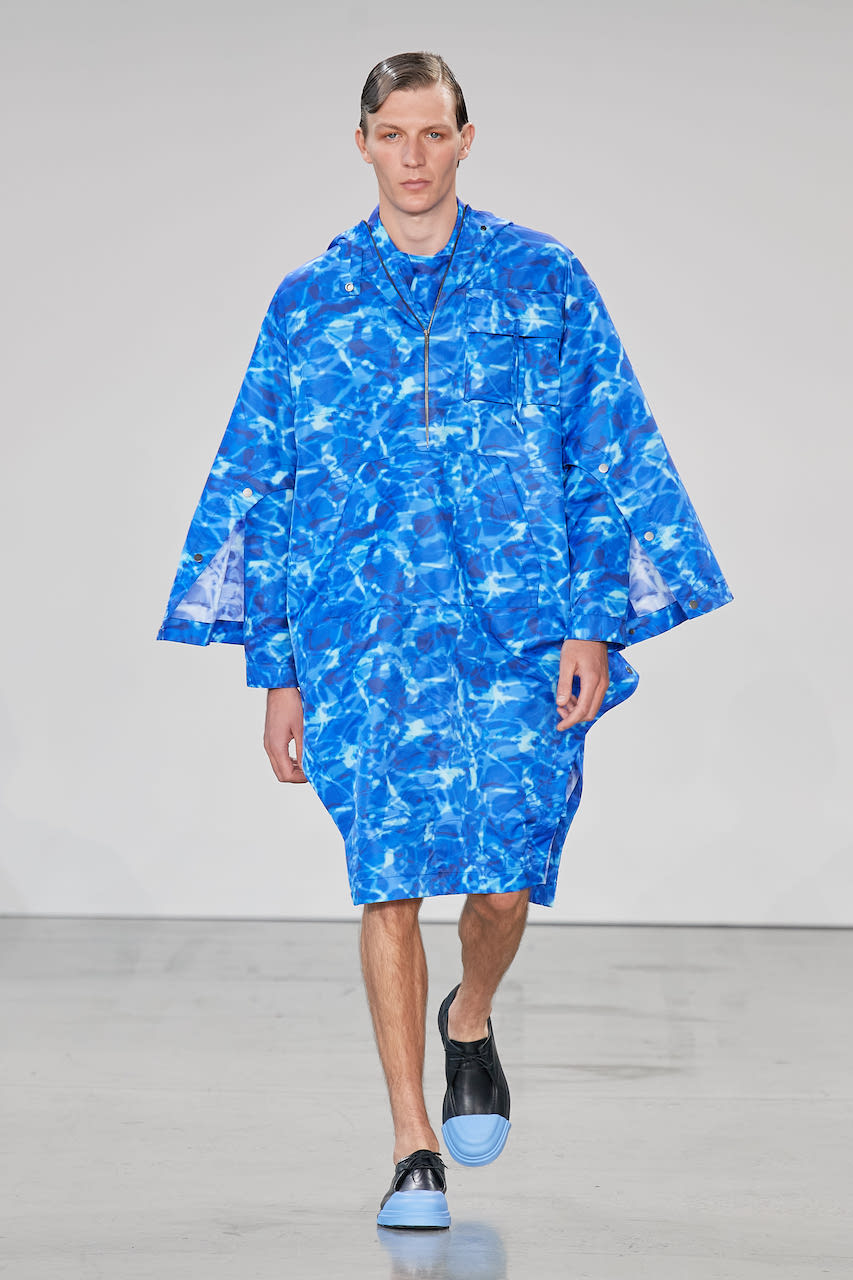 After a three-year hiatus from Fashion Week, designer Andrea Tsao returned with a standout collection honoring all the codes of the timeless luxury label. A recipient of IMG’s New York Fashion Week Small Business Grant, Deveaux’s latest collection nods to the weather cycle and summer in New York. Merging the two themes comes a collection that is not only figuratively inspired by weather with a mirage water print but also in practicality, seen in the waterproof parka jackets.

It’s hard to believe Peter Do menswear didn’t exist until now, mostly because of the gender fluid silhouettes in the brand’s designs. Do’s menswear mirrors the minimalist aesthetic in his womenswear, in a palette of muted black, white, gray, and neutrals with a touch of masculinity added. 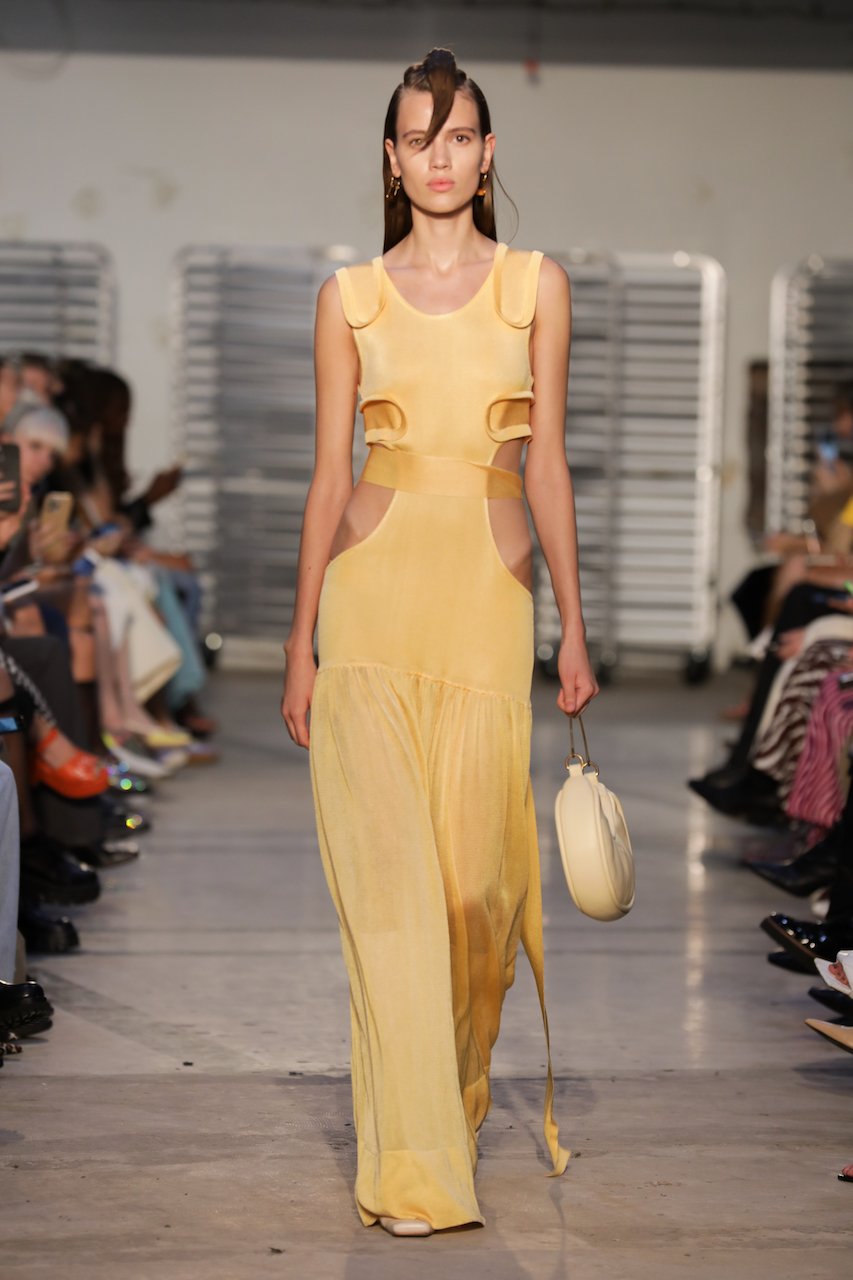 Before presenting her collection dubbed “a fragile homeland,” Ukrainian fashion designer Svitlana Bevza had a moment of silence for the lives lost during the war in Ukraine and projected the Ukrainian flag on the wall. The collection itself was Bevza’s most political one yet. Her elegant and minimalist designs reflect the times and are engineered to reflect bulletproof vests and silver shields. 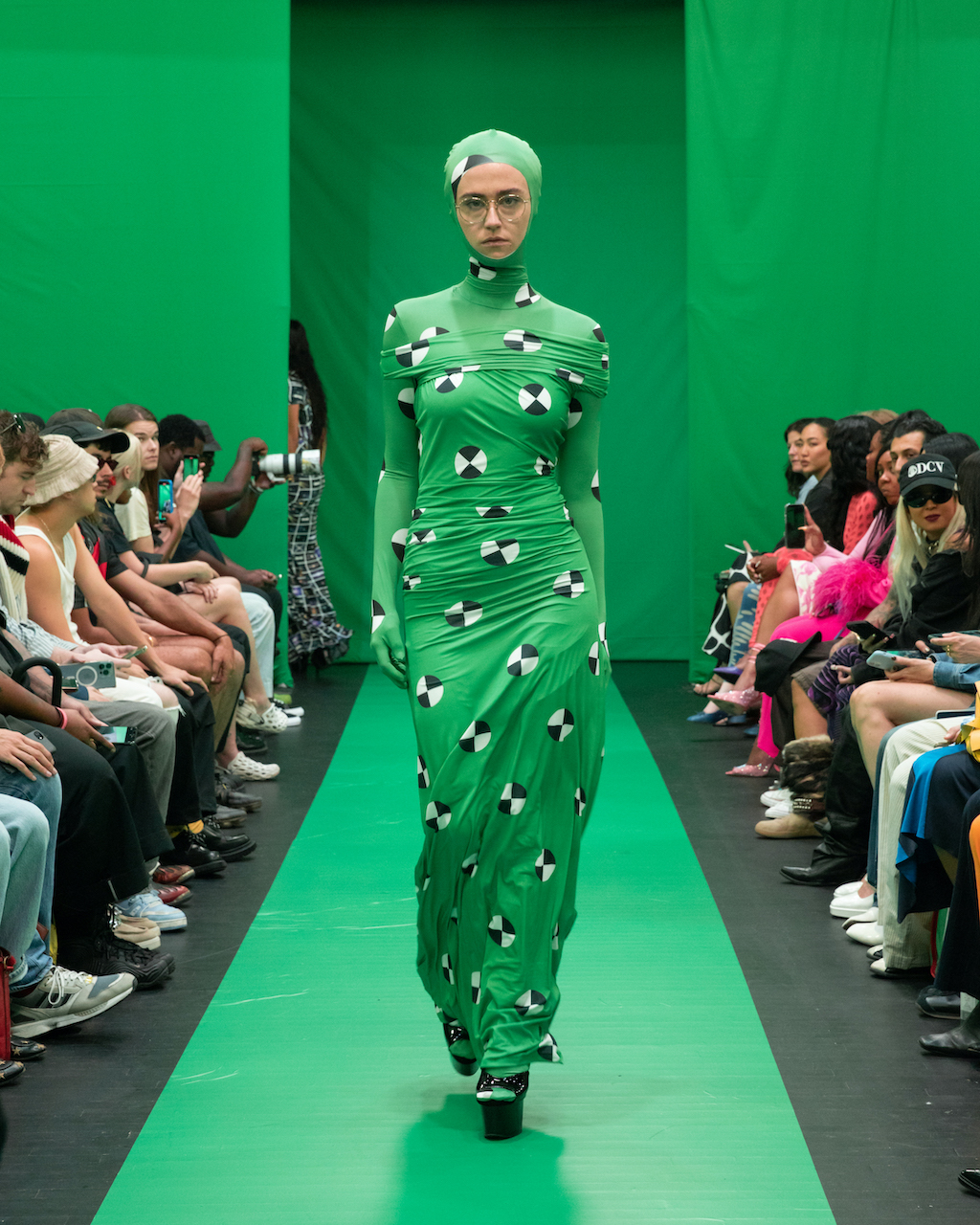 Like last season, designer Maisie Schloss further explores the digital age with computer-generated imagery (CGI) and special effect techniques used in filmmaking. This season, Schloss introduces her first men’s collection, which seems like a natural next step seeing the demand rise in male customers slipping into her gender fluid designs. The menswear collection follows the same DNA of her womenswear pieces. Similar silhouettes, including the Perforated Turtleneck, Nebula Trousers, and Muscle Beach Tank, make a comeback reinvented for a new audience.

Model Elsa Hosk kicked off the show in a purple sequin turtleneck dress, and a paraded of Laquan Smith’s sexy and confident designs, styled by Patti Wilson, followed. The USS Intrepid on the Hudson river served as the show’s venue and added to the list of New York landmarks (including the Empire State Building) where the designer has shown his stunning designs. 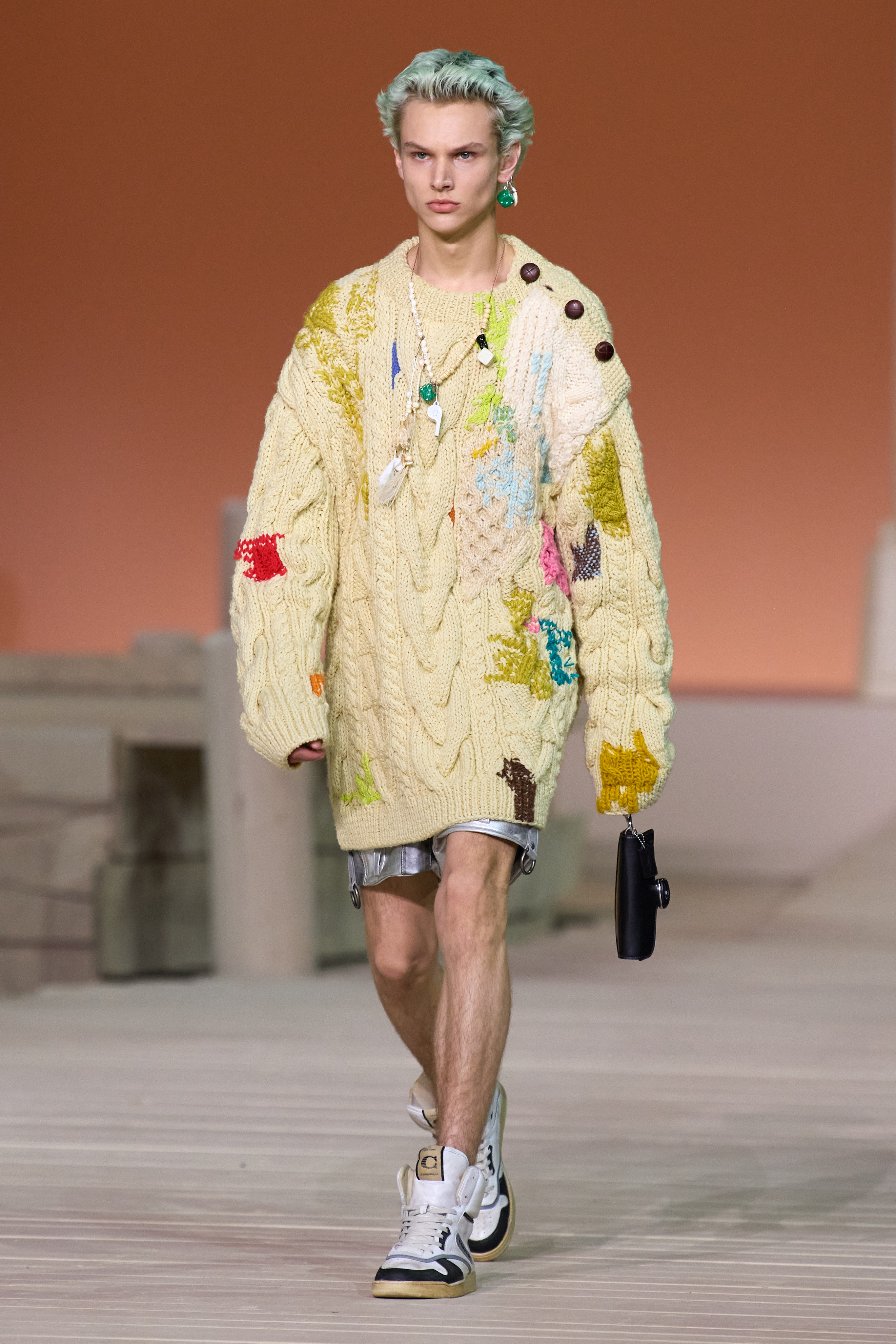 In typical Stuart Vevers fashion, the creative director opened his SS23 collection with a romantic, cinematic presentation. As the performance ended and the lights dimmed, a brigade of models took the runway in the season’s latest looks. Standout from the bunch was the patchwork pieces put together using vintage and reworked garments. The show also featured musician Lil Nas X, who joined the Coach family as a global ambassador, and closed out the show. 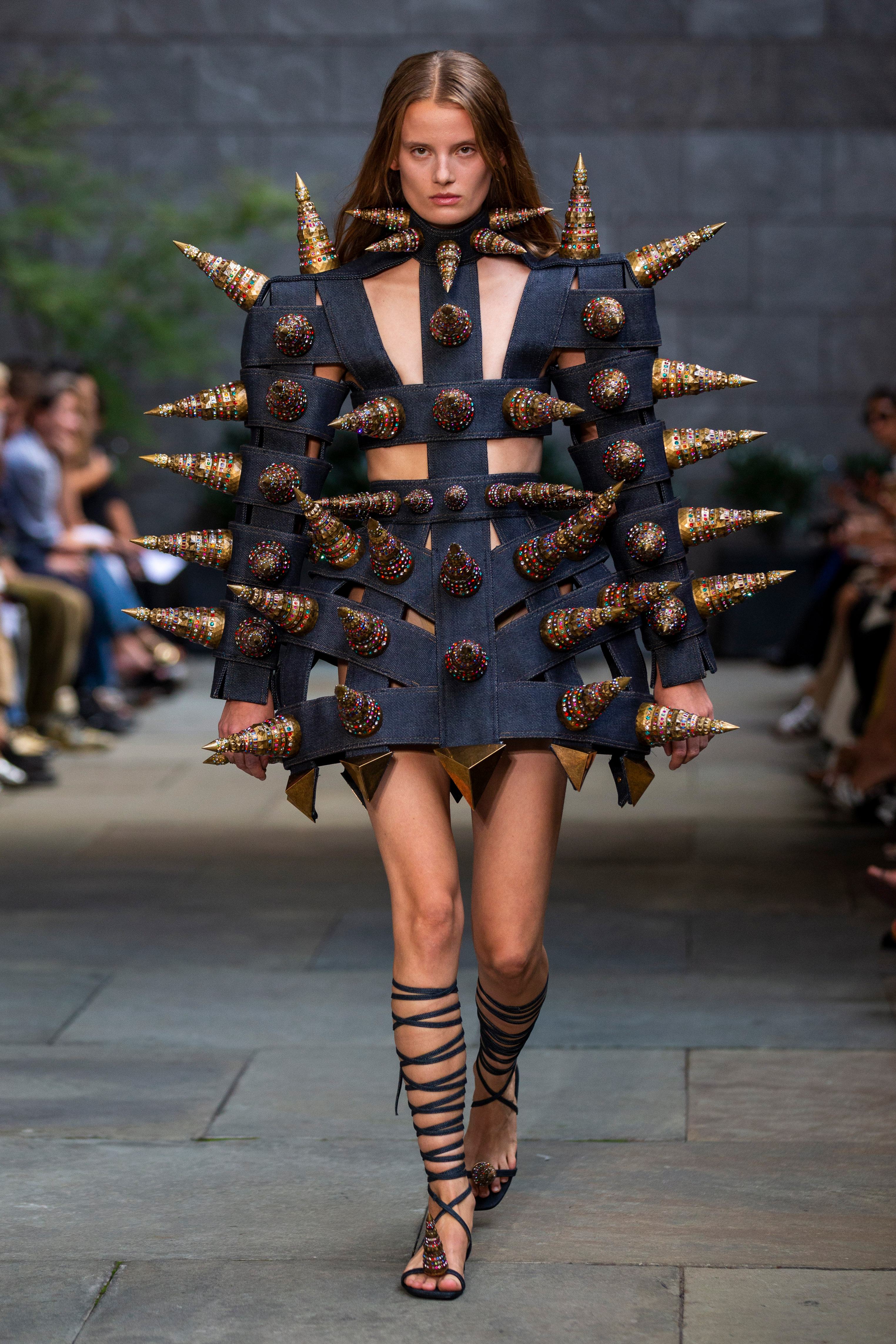 Area’s Collection 04 (not to be mistaken as SS23 as the brand operated on a See Now, Buy Now schedule) explores concepts of ancient architecture, worship, and fetish and is demonstrated through shape, construction, and signature embellishment. The show also teased four different flat and high heels sandals in collaboration with Italian footwear label Sergio Rossi. 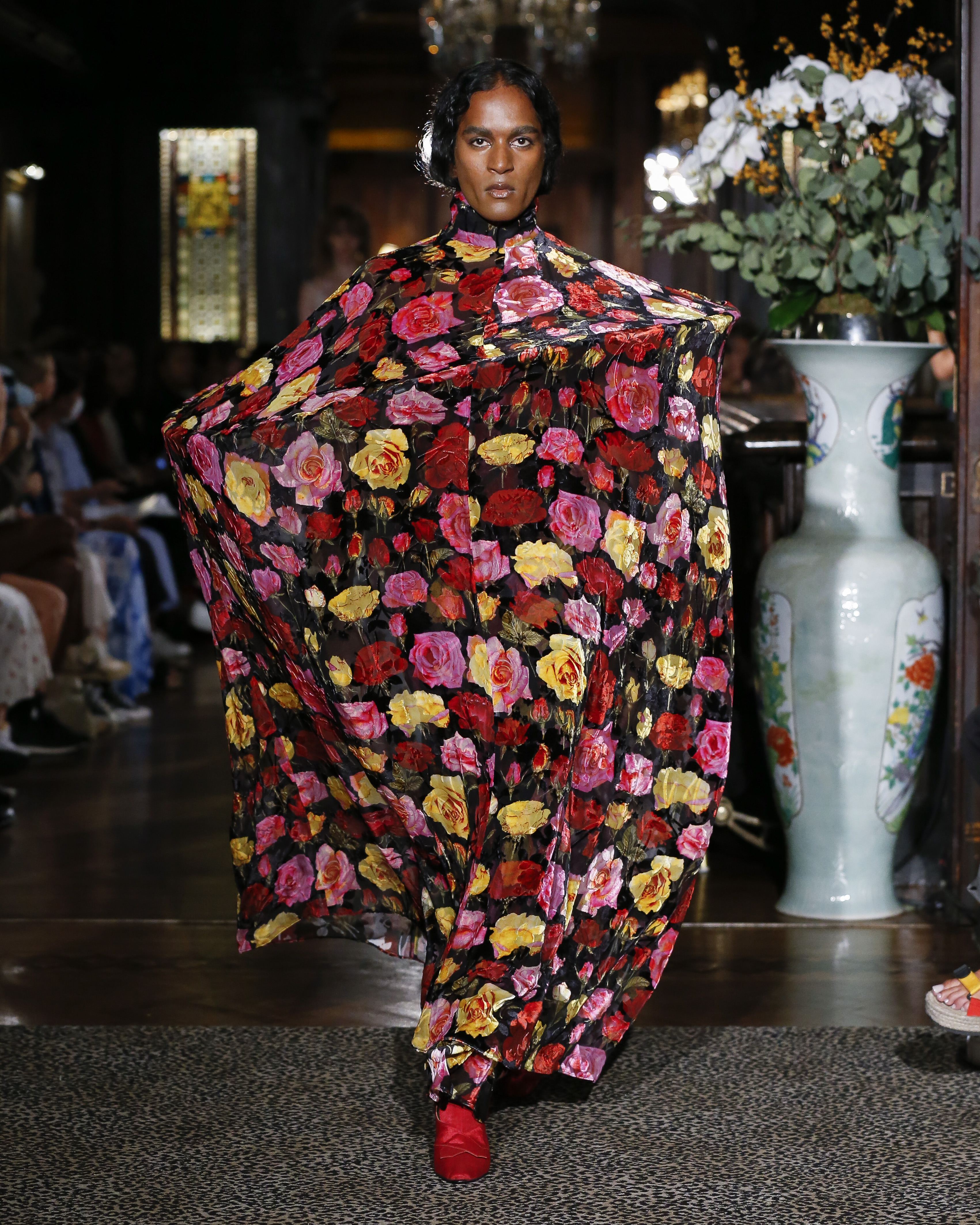 Puppets and Puppets designer Carly Mark was inspired by Stanley Kubrick’s Eyes Wide Shut, the illustrations of Dante’s Inferno by Gustave Doré, and parties in New York City. Mark fused the themes to create a surrealist story about New York that appeals to the masses. Her runway show also debuted a collaboration with Y2K label Michael Stars, giving a chic upgrade to looks for those who loved the brand as a teen.

Despite the heavy rain coming down at the Tommy Factory Fall ’22 runway show, the American designer paid tribute to the great American artist Andy Warhol’s iconic N.Y.C. factory, where he brought together fashion, art, music, and entertainment.

“From our new TH Monogram designed in partnership with Fergus Purcell to our boundary-breaking collaboration with British designer, Richard Quinn, this Fall we’re colliding the classic with the new to light up what’s next. Remixing traditional Americana codes with a contemporary, streetwear-inspired twist. Clashing bold pop colors, reimagining proportions and restyling heritage classics in unexpected ways,” says Hilfiger in his show notes. “This is modern prep, for all. An inclusive celebration of pop culture and creativity, across all worlds from IRL to URL – this is Tommy Factory.”

Marni Creative Director Francesco Risso lit up the cobblestone streets of DUMBO, presenting a collection inspired by celestial movements. Images of the sun were prominent throughout the collection as models took the runway. “The sunset is not a phenomenon of the sun – taking place on the horizon,” the show notes read, “but a phenomenon of the body – setting the sky on fire.”

Joseph Altuzarra knows suiting all too well. Crafted blazers with precise cuts and broad shoulders stood out in the collection featuring waist-cut silhouettes and adjustable drawstrings. “We wanted to create different characters this season and decided on an array of hair looks, from twisted, organic ‘mohawks’ to natural waves and textured bobs, that would speak to this collection and celebration of individuality,” mentioned the designer in his show notes.

In celebration of 25 years of the Fendi Baguette, the house left its HQ in Milan for New York City to stage their SS23 Resort show. Creative director Kim Jones debuted a collaboration with his longtime friend Marc Jacobs. The standout bag married the iconic Baguette shape with Jacobs viral “Tote Bag” typography.

Fans first became obsessed with Hillary Taymour’s designs during the pandemic, when her hoodies, oversized tees, and joggers added a stylish touch to work-from-home wardrobes. This season, the sustainability-centered brand presented dressier options from dip-dyed silk corsets and form-fitting gowns.