The actress loved the 'Pretty Little Liars' franchise in all its forms before snagging not one, but two roles in the new HBO Max series

Got a secret, can you keep it? There’s a new resident mean girl in the Pretty Little Liars universe, and she’s got an equally evil twin. 22-year-old actress Mallory Bechtel grew up watching and reading the beloved franchise, and now, she not only plays one but two roles in the new spin-off, Pretty Little Liars: Original Sin.

“I am just still processing that it’s Pretty Little Liars. I was such a huge fan growing up, so it’s a huge deal,” Bechtel tells GRAZIA USA. “To get to play two characters feels like I won the freaking lottery. I’m so grateful.”

The franchise began with a series of bestselling YA novels by Sara Shepard, following the harrowing tales of four girls, Spencer Hastings, Hanna Marin, Aria Montgomery, and Emily Fields, as they work to unmask their unknown tormentor, “A.” The books were adapted into a cult-beloved television series on the Freeform network in 2010, starring Troian Bellisario, Ashley Benson, Lucy Hale, Shay Mitchell, and Sasha Pieterse. Now, the HBO Max series follows a new generation of teenage girls who fall victim to the schemes of the anonymous villain, “A.”

HBO Max’s reboot features Bailee Madison as the pregnant teen ring-leader Imogen Adams, Maia Reficco as Noa, Malia Pyles as Minnie, Zaria Simone as Faran, and Chandler Kinney as the cinephile Tabby. Bechtel portrays twins, Karen and Kelly Beasley, who are the daughters of the quiet town of Millwood’s vindictive Sheriff, and who find themselves on the outs with the group.

Bechtel relished in exploring her characters’ prickly exteriors, and sank her teeth into the comically mean-spirited Karen and Kelly. “I love playing the villain,” Bechtel says. “When you’re playing a mean character, you have to sympathize with them if you’re going to do the character justice. I loved [Karen], I still love her. She’s obviously a terrible human but has a lot of pain and demons.”

The Beasley twins are emblematic of the evil twin mythology woven throughout the original series. The original PLL mean girl, Pieterse, reached out to Bechtel via social media congratulating her on her new role taking over the reigns. “I was on set when that happened — cast members can attest to this — I broke into a sweat, forgot how to talk,” Bechtel says with a laugh. “I was so truly starstruck. It was so sweet of her to do. I thought that was so kind. Now we follow each other on Instagram, so no big deal.”

In her roles, Bechtel succeeds in intricately formulating independent identities for the two Beasley sisters. “It was a lot of sitting down and having conversations with the director and just finding out what those tiny little differences between them was going to be, because they did want them to be similar and confusable and they do pose as each other,” says Bechtel.

Thanks to a little help from the wardrobe department, Karen and Kelly became their own people. “When we first meet them, they dressed very differently,” Bechtel explains. “Kelly’s always in blue, Karen’s always in pink. Karen’s always in a heel and Kelly is always in flat shoes. That would affect my posture and how I carried myself. Also, Karen wears less clothes and Kelly’s a little more conservative. That affects how you carry herself as well.”

Bechtel did a lot of character work for the girls, studying the dynamic of their sisterhood, and spitfire characters from cinema’s past, like Chris from the 1976 Stephen King horror classic Carrie. Bechtel incorporated specific details for each twin down to the minutia. Karen keeps her mouth open when she listens, while Kelly keeps hers closed. Karen’s voice is deeper than Kelly’s. Each little trait adds up to a fully realized character. “There is inherently so much to unpack, and that’s what’s fun about them,” says Bechtel. “You have to do a lot of digging to find their heart, and where they’re coming from – what motivates them.”

She didn’t have to play both roles for long — one of Bechtel’s two characters meets an untimely demise in the second episode of the season. “It’s so cool to die. That was one of the first things we shot. I was so stressed to be Kelly, running up to the body because it was still so early in the process. I had just met all the cast members, and everyone was on set watching,” says Bechtel. “Then, once I got to be Karen lying on the ground, I was as happy as a clam. I was just lying there still, and they just kept coming back and putting more blood on me.”

For someone who grew up in the age of PLL’s peak of popularity, the legacy of the series is immeasurable. “It’s been so amazing to be a part of something that so many people my age love. I’ve gotten to reconnect with a lot of high school friends, and it’s incredible,” says Bechtel. “Once I officially got the part, I invited all my friends over and I surprised them. I was in Texas at the time, because of the pandemic I had moved home. We all watched the pilot together to celebrate. We all grew up watching Pretty Little Liars, loving Pretty Little Liars and loving Riverdale. I was a huge fan of Chilling Adventures too.”

The new anthology was written and produced by Roberto Aguirre-Sacasa and Lindsay Calhoon Bring, who also worked on the teen melodramas Riverdale and Chilling Adventures of Sabrina. “The fact that it was Roberto was a huge deal,” says Bechtel. “I feel so grateful to Roberto and Lindsay, they have written so many complex female characters on the show.”

Bechtel had a pinch-me moment when she saw the actress Lucy Hale, who played her favorite character from the original series, Aria Montgomery. “I saw her from 20-feet back at the premiere, which was everything. I don’t need anything more than that,” Bechtel shares. “I was sitting next to my mom and told her, ‘That’s my idol right there.’

“I just thought Aria was so cool,” Bechtel adds. “I thought her style was awesome. She was such an It girl. I also loved that she was a writer and she loved English, and that was always my favorite subject. I think I just wanted to be like her more than anything.”

Bechtel played Zoe Murphy in the Broadway production of Dear Evan Hansen and was set to star alongside James Van Der Beek in a limited showcase of Bye Bye Birdie at the John F. Kennedy Center for the Performing Arts before COVID-19 halted production. “I would love to return to the stage, says Bechtel. “I love to sing, and I haven’t gotten to sing in a while.”

Lately, she’s turned into a bona fide scream queen in the horror genre after starring in Ari Aster’s 2018 psychological horror Hereditary and 2021’s Know Fear. “I have no idea why I’ve only done horror,” Bechtel admits. “I think it’s coincidental, but I would say I’ve grown to love it. Pretty Little Liars is so riddled with references and Easter eggs [from the genre]. My little sister came and visited me in the city, and every single night we watched a horror film. My siblings are huge horror buffs. I love the genre. I don’t know why I’m in it, but I love it.” 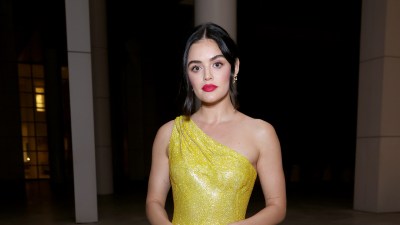 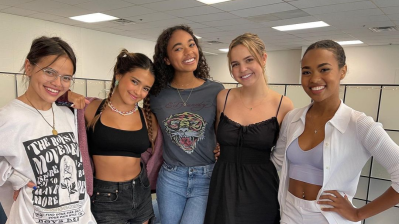