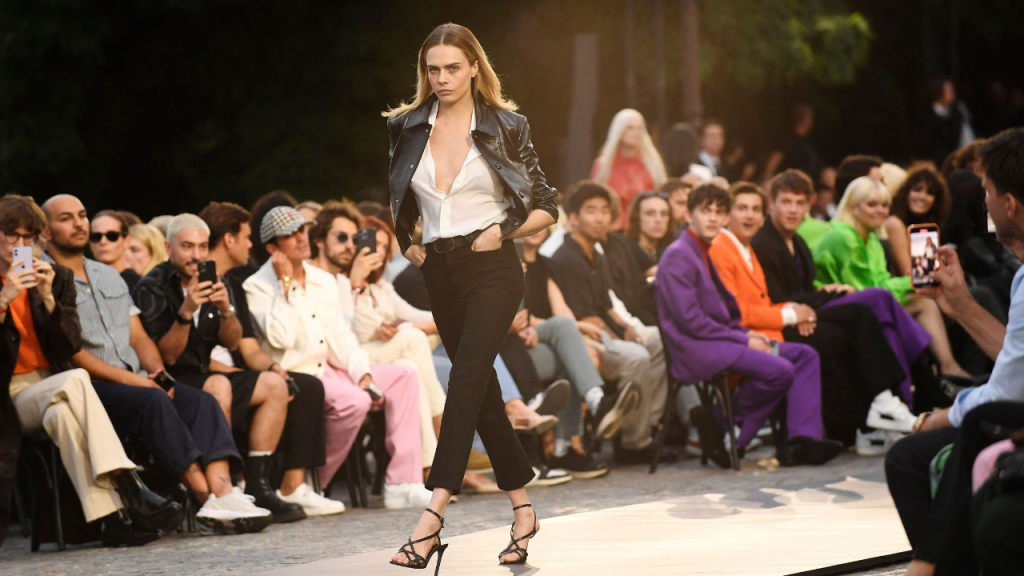 Every season, a few designers invariably create a memorable moment on the runway with a cast of star-studded models. During the Spring-Summer 2023 Men’s Show in Paris, AMI Paris creative director Alexandre Mattiussi enlisted some instantly recognizable faces for a show dedicated to the City of Lights.

Mattiussi is never one to do anything low-key (remember his coming to America celebration that featured a not-so-subtle bash atop of the Empire State Building?). So when the designer announced he would show his collection at the foot of Paris’ iconic landmark, Sacré-Coeur, it seemed very fitting. To present the collection, models including Precious Lee, Paloma Elsesser, Karen Elson, Liya Kebede, Kristen McMenamy, and Mariacarla Boscono all took the streets of the 18th arrondissement donning the mix of mens and womenswear garments.

Naturally, there were a few surprises, too. Cara Delevingne returned to the runway (her second catwalk appearance of 2022) rounding out the tour-de-force of superstar models, while iconic French actress Audrey Tautou, made a surprising debut opening the show.

This wasn’t Tautou’s first time at the famous basilica. If you’re familiar with the actress, you undoubtedly know her breakout film, Amélie, where her on-screen character, worked at a cafe in Montmartre — steps away from where the AMI show took place. Returning 20 years later, Tautou kicked off the show strutting out in a silky shirt paired with white jeans and boots. The look was topped off with a classic Parisian style trench coat pulling it all together.

As for Delevingne, she hit the runway with that je ne sais quoi that makes a model a supermodel. She channeled the effortless cool brand in a laissez-faire look that was chic, cool, and had a little edge, just like the star herself.

With three days left of Men’s fashion week, Mattiussi has made his major casting moment a tough act to follow.