Keke Palmer Has and Always Will Be an ‘Incomparable Talent’

'Baby, THIS, is Keke Palmer'

Keke Palmer’s press tour for Jordan Peele’s new sci-fi thriller Nope has brought out so many fashionable stops for the star. Stopping by Late Night with Seth Meyers, Watch What Happens Live with Andy Cohen, The Tonight Show Starring Jimmy Fallon, and more, Palmer’s style has been as bright and bubbly as her personality, courtesy of her styling duo Wayman and Micah (Wayman Deon and Micah McDonald).

Nope follows residents of a rural California town after they come into contact with a strange, unknowing force. Caretakers of a small horse ranch notice how human and animal behavior seem affected after the UFO sightings. Out since July 22, 2022, the sci-fi thriller has already been met with critical acclaim, with many praising Palmer for her portrayal as Emerald Haywood in the new movie.

From her days as a child actor, starring in films like Akeelah and the Bee and the Nickelodeon series True Jackson, VP, to starring in highly acclaimed films like Hustlers, Palmer has racked up accolades, including an Emmy Award for Outstanding Actress in a Short Form Comedy or Drama Series for her role in Turnt Up with the Taylors in 2021.

However, this weekend a tweet went viral comparing Palmer’s career trajectory to Zendaya’s. What sparked the conversation was the idea that Palmer’s role in Nope is anywhere close to a “breakout role” for the very established star.

“I’d like someone to do a deep-dive on the similarities and differences between Keke Palmer and Zendaya’s careers,” a Twitter user wrote. “This may be one of the clearest examples of how colorism plays out in Hollywood. They were both child-stars, but their mainstream popularity is very different.”

Standing up for herself, Palmer clapped back, “A great example of colorism is to believe I can be compared to anyone. I’m the youngest talk show host ever. The first Black woman to star in her own show on Nickelodeon, & the youngest & first Black Cinderella on broadway. I’m an incomparable talent. Baby, THIS, is Keke Palmer.”

She went onto write, “I’ve been a leading lady since I was 11 years old. I have over 100+ credits, and currently starring in an original screenplay that’s the number one film at the box office #NOPE. I’ve had a blessed career thus far, I couldn’t ask for more but God continues to surprise me.”

In addition to Nope, Palmer’s also starred in the historical thriller Alice, released in March, which charts the escape of an enslaved woman from a plantation in the Antebellum South, realizing the year is 1973 after gaining her freedom and must come to terms with culture-shock and the lies that kept her enslaved. After that Palmer starred as the voice of Izzy Hawthorne in the Disney film Lightyear (the tale of Toy Story‘s Buzz Lightyear), alongside Chris Evans.

As Jimmy Fallon put it during Palmer’s stop on his show, “I think this is the year of Keke Palmer.” We couldn’t agree more and we really can never get enough of Keke Palmer. For more, check out some of her major red carpet moments during her Nope press tour, below.

Stepping out on the red carpet for Nope‘s Italian premiere in Rome, Palmer donned a strapless highlighter yellow column Prada gown with a cascading train and black opera gloves, styled by Wayman and Micah.

Running around doing press, Palmer opted for a Christopher John Rogers Pre-Fall 2022 ensemble in neon green with a plain white cropped tank and matching PVC pointy-toe pumps. Not the first time Palmer has shown love to the designer, the star rocked a a lime green Christopher John Rogers suit and a floor-length vibrantly stripped button-down shirt with exaggerated collar for an appearance on Jimmy Kimmel Live! in March. The designer took to Instagram to say, “🎾 Multi-hyphenate superstar @Keke Palmer promoting her new film Nope, in Sulphur twill and bonded Japanese crepe tailoring from Collection 009.” 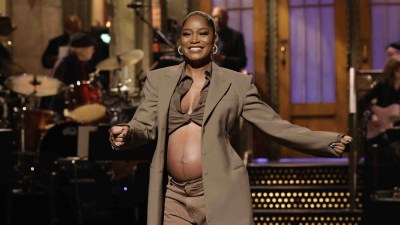 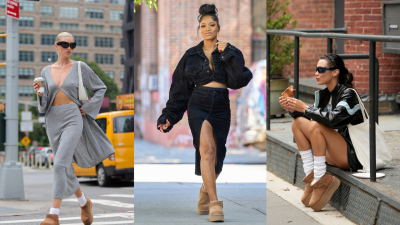 Platform Ugg Boots Are Having a Moment Thanks to Elsa Hosk, Keke Palmer, Bella Hadid and More 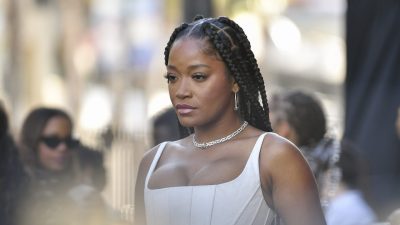 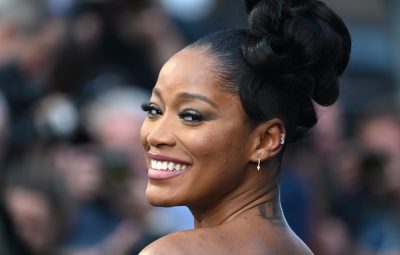 Keke Palmer Takes Her Style to Infinity and Beyond 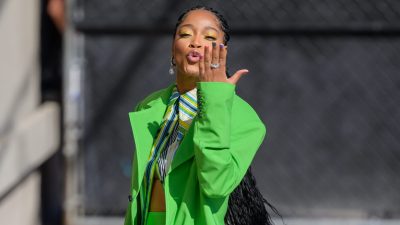 Keke Palmer Is Giving Us Some Serious Green Outfit Inspo This St. Patrick’s Day
Next page