Model, actress, and best-selling author Emily Ratajkowski has officially filed for divorce from her estranged husband, Uncut Gems producer Sebastian Bear-McClard. The My Body writer reportedly filed in Manhattan Supreme Court on Thursday according to court records obtained by Page Six, but the paperwork was contested, noting that there are stipulations that still must be litigated.

Earlier this summer, news broke that the pair were splitting after three years of marriage. In conjunction with news of the breakup, rumors of Bear-McClard cheating began to swirl.

At the time, a Page Six source told the publication, “He cheated. He’s a serial cheater. It’s gross. He’s a dog.” After Ratajkowski began liking fan’s Tweets on the subject (such as “Can’t believe that little bitch cheated on emrata”), many took her support as a subtle confirmation.

This month, the Inamorata founder took to TikTok in a video to discuss the notion of dating in a patriarchal society. “Under a patriarchy, there’s this premise of like men ‘getting women,’ like ‘getting them,’ ‘pulling them’ like they’re something to possess,” she said.

“Which I feel, as a recently single person who is thinking about dating and stuff, I’ve really seen that with my friends and with the conversations kind of around it. It’s like, ‘Oh, who’s gonna get her??’ rather than, this is a reciprocal, mutual relationship where two people could potentially foster love.”

The pair tied the knot at a New York City courthouse in February 2018 and share a 1-year-old son Sylvester, whom they welcomed in March 2021.

Shortly after news of their split, Bear-McClard left his own production company Elara Pictures after co-founding the company in 2014 alongside Uncut Gems directors Josh and Benny Safdie, and producer Oscar Boyson.

The entrepreneur seems to be living her best life as a “recently single person,” going to concerts, stepping out for fashion week, attending the US Open Tennis Championships with close-friend Ziwe, and most importantly, enjoying the company of her son, Sly. 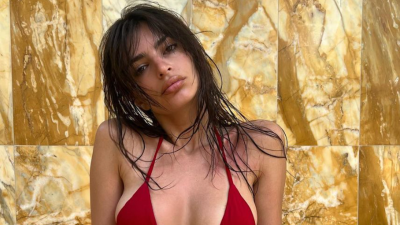