Beyoncé and JAY-Z Take Us Along For Date Night In Romantic Tiffany & Co. Ad Inspired by Breakfast at Tiffany’s

Including an adorable cameo from Blue Ivy

Buckle up, Beyoncé and JAY-Z are taking us along for a romantic date night in a “Breakfast at Tiffany’s” themed video for Tiffany and Co.’s latest campaign.

The film, appropriately titled “Date Night,” is the latest to come from the couples “About Love” campaign with Tiffany and Co. in what they call “exquisite bonus content.” Queen Bey and JAY-Z cozy up and reproduce the iconic backseat taxi scenes from the 1961 film as they’re driven through the city in a black Rolls-Royce. The American sweethearts show their adorning yet playful relationship by piling on the romance and, of course, unmissable Tiffany diamonds. Focusing on the film was hard when Bey sparkled donning the Tiffany & Co. Ailsa diamond ring (well over 10 carats) and a pair of 6-carat diamond Ribbon Fan earrings. Meanwhile, her hubby opted for the legendary Bird on a Rock brooch which features an 18k gold bird perched on a morganite gemstone of over 44 carats — talk about dressing for the occasion.

The assortment of dazzling jewels were pulled from the archive of the maison’s Jean Schlumberger era. The French jewelry designer was best known for dressing high society’s elite in the 1960s and ’70s, making sense that the power couple would be continuing the legacy in the vintage-inspired film. As their journey continues, JAY-Z asks Bey, “Shall we get pizza?” in which she agrees — and naturally, when you’re having pizza, you need a glass of champagne (at least when you’re a Carter, that is.) The driver pulls over, where the two are handed a bottle of JAY-Z’s bubbly brand, Armand de Brignac (we see the smooth LVMH crossover you did there.)

As the night comes to a glorious close, the soundtrack of Paul Anka’s Put Your Head on My Shoulder plays in the background of the car ride while Beyoncé plays a game of “he loves me, he loves me not” and softly mouthing the words in unison with her beau. The couple seemed overjoyed when 9-year-old Blue Ivy’s crashes the intimate date night by hopping in between the two in an oh-so-adorable cameo. Watch the romantic rendezvous for yourself, below. 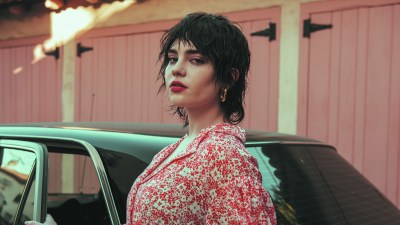