He's the heir to a chocolate fortune, for one

Model and designer Alexa Chung has taken to Instagram to wish her boyfriend, Orson Fry, a happy birthday. For those thinking ‘Wait, what boyfriend?’ or, ‘Orson who?’ worry not, Chung has kept her romance relatively low-key. So low-key, in fact, that you’d be forgiven for not even knowing the pair were an item—despite the fact they’ve been together for over a year.

So, who is Orson Fry? According to reports, the 25-year-old is the heir to Fry’s chocolate dynasty—his father is Cosmo Fry, and his late mother is Amanda Aspinall, an author who was famously married to Hall & Oates frontman Daryl Hall (they divorced in 2015). The presence of a musical icon in Fry’s early life seems to have rubbed off—he is the frontman of the indie band Soundtown, while his sister, March Fry, is a jazz singer.

Chung and Fry were first connected in May 2019, when they were photographed holding hands and kissing at the All Points East Festival in East London’s Victoria Park. Since then, they’ve been spotted at a handful of super-chic events, including Dior’s Haute Couture show in Paris in January, and an art exhibition celebrating the work of Lucian Freud in London last August. During lockdown, the pair didn’t share much on social media (Fry’s account is private)—aside from an adorable selfie in matching loungewear designed by Chung’s friend, Harley Viera-Newton.

As one of the world’s most prominent fashion figures, it’s perhaps no surprise that Chung’s every romantic move has been documented and picked apart by the media. Her four-year romance with Arctic Monkeys frontman Alex Turner continues to inspire fandom, despite it ending in 2011—while her relationship with Swedish actor Alexander Skarsgård was the subject of many a frenzied paparazzi moment.

In 2019, following her breakup with Skarsgård, Chung penned an essay lamenting her experience attending multiple weddings per year alone. “Currently, at 34, I attend on average five weddings per year. Alone,” she wrote. ” Beautiful, inspiring, moving weddings. Close friends marrying close friends in far-flung places that take months or years to plan. And as these couples slow-motion down the aisle under confetti showers, I’m there clapping and smiling and crying and planning where to stand to catch the bouquet.” One year on, and it seems as if she’s found her happy ending. Cue: happy tears. 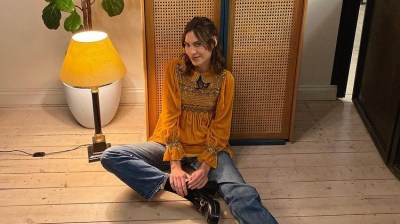 Alexa Chung Wants You To Wear A Dress Over Jeans Again 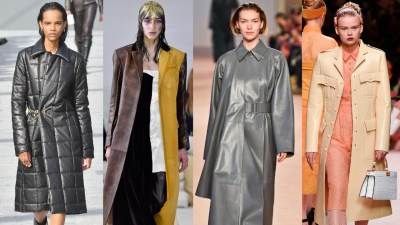