Someone get the girl some Bondi Sands, STAT

One of the many positives about being a celebrity is access to a team of people whose sole purpose it is to make you look really, really ridiculously good. These ‘glam squads,’ as they’ve been dubbed in the media, often amass hundreds of thousands of followers of their own thanks to having up close and personal access to some of the world’s most famous faces. But for some reason, on one of the biggest days of Emily Blunt’s life, the British actress opted for a DIY job when it came to one very important element: her tan.

In July, 2010, The Devil Wears Prada actress married fellow actor John Krasinski, admitting to James Cordon on The Late Late Show that if she could do it all again, there’s one thing she would do differently. ‘I got a bad spray tan and I would probably change that,’ she said. ‘I look at the pictures and it just has an orange hue that is unnatural to normal skin color.

‘It was a do-it-yourself spray tan, I was on a budget on my wedding day – I don’t know why – it was a bit patchy. It stinks and it was a very hot day so if you sweat and you have a spray tan… wearing white, just seeping orange. Oh, it was terrible… yeah, it was bad,’ she continued, reminding pretty much every woman in the world of their high school ball.

The couple, who now have two children together – daughters Hazel and Violet – got married in Lake Como, Italy with guests there to witness the tan blotch IRL including George Clooney.

Though the sequel to their film A Quiet Place was due to be released later this month, the pair have decided to postpone the release due to the coronavirus. 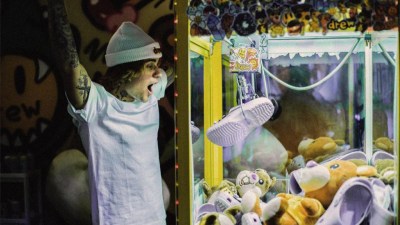