Get lost in her blue within blue eyes

Warner Bros. may have pushed back the release of Denis Villeneuve’s highly anticipated Dune remake yet again, but it looks like it’s going to be worth the wait. The latest trailer for the sci-fi epic based on Frank Herbert’s novel is out today, and in it we get more of everything we want: breathtaking visuals, giant sand worms and Zendaya!

The initial trailer, released back in September, briefly teased the romance between Zendaya’s Chani and Timothée Chalamet’s messianic princeling Paul Atreides. But it focused more on the eerie prophesy about Paul’s destiny delivered by the witchy Reverend Mother Gaius Helen Mohiam (Charlotte Rampling, as icily beguiling as ever). Obviously, there’s plenty of Chalamet in this new preview, but we also get a lot more of Chani right at the top.

“The outsiders ravage our lands in front of our eyes,” Chani’s voiceover explains. “Their cruelty to my people is all I’ve known.” Her people are the Fremen, the blue-eyed natives of Arrakis, the desert planet at the center of the film’s galactic conflict, and the outsiders are the Harkonnens, lead by the brutal Baron (Stellan Skarsgård). But when the Harkonnens are ousted by the much more diplomatic House Atreides, a battle begins for control of the source of the all-powerful Spice Melange, and Paul and Chani’s destinies become linked. 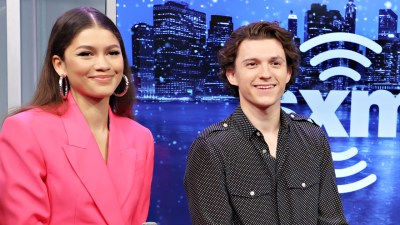 Is Zendaya’s Boyfriend Tom Holland Making An Appearance On ‘Euphoria’? Why Fans Think So

‘And Just Like That’: Was This Week’s Episode The Worst Yet?
Next page