Dove Cameron lives for camp. Actually, she does more than live for it: “I live, eat, sleep, breathe, die for camp!” she gushes. “Camp is my number one most important ingredient! I think that most things should be done with a camp sensibility. And all my favorite things have huge elements of camp.” (To be clear, we’re talking about the Susan Sontag brand of camp—not your kids’ summer getaway.)

She pauses and laughs at herself. “I’ve said ‘camp’ so many times it’s going to stop sounding like a word!”

Other things that don’t sound like words: Schmigadoon! Both a parody of and tribute to the Golden Age of Hollywood musicals, the Apple TV+ comedy concerns a seemingly contented couple, played by Cecily Strong and Keegan-Michael Key, who stumble upon an enchanted village while hiking and find that they’re unable to escape the saturated colors, artificial landscape, and incessant singing until they find true love—either with each other or with someone else. The town of Schmigadoon is populated by over-the-top tropes: the pinched, judgmental minister’s wife (Kristin Chenoweth); the effete mayor (Alan Cumming); the lovable tomcat (Aaron Tveit); the virtuous, independent-minded schoolmarm (Ariana DeBose). Cameron plays Betsy, the farmer’s buxom daughter who initially tempts Key’s character. It’s a high-camp role that she embraced with gusto.

“I view her not really as a person as much as she is an idea of the projected male fantasy, the collective hivemind spirit of what a woman should have been in that time,” Cameron says of the character. “That whole idea of innocent as a rose always used to grate me. I remember watching [musicals] at eight years old being like, What in the f**k is this? I knew even then that it was a massive injustice to be a woman in musical theatre.”

Schmigadoon!, however, gave her the opportunity to parody the ingénue trope. “It was so fun because things like that hold power when you don’t acknowledge them,” Cameron explains. “Classic tropes like that only hold the shadowy, dark, ugly power when they remain unacknowledged. And when we’re in your face about how ludicrous they are, that’s when they lose their power.”

And, after all, isn’t that what camp is all about? A devoted fan of RuPaul’s Drag Race, Cameron took cues from some of her favorite queens in bringing Betsy to life. “Camp is so beautiful and impactful because it’s an acknowledgment of human nature, and also the flip side of that joy, which is horrible, terrible grief and trauma and loss, you know? Two sides of the same coin, which is why I find that there is such a humility in the surrender to looking stupid and allowing yourself to be so fully unabashed in a character like that, or in your drag persona, or in your expression of your art—in all of these things. That’s where all the human juices are!”

Cameron has experienced her fair share of grief and loss. Born Chloe Celeste Hosterman on Bainbridge Island, Washington, a small island community in the Puget Sound, she describes her childhood as a strange mix of high highs and very low lows. To start, the home she and her sister shared with their parents was constantly under construction.

“I think my sister at a certain age was like, I want a ladder in my room and a bubble window! And my parents were like, It’s brilliant! An indoor bridge? We must have it!” she recalls. Money was tight, but her parents prioritized creativity and joy, and made up for a lack of material possessions with a wealth of experiences. “They had a company out of India, so my sister and I traveled a lot to India. We went everywhere with them, so I was never really in public school very much. Like, six months in, one year out, three months in, two years out. But then, I had a great close relationship with [my parents]. No structure, no consistency, lots of experience.”

Through it all, Cameron grew up watching the films her father cared about: Lawrence of Arabia, The Rocky Horror Picture Show, Gone with the Wind. As their household became increasingly unstable, film and music became and escape route of sorts for Cameron. “I think I fell in love with the idea of what the world looked like in movies, versus what my world really looked like,” she recalls. Her parents divorced, and her father, who struggled with mental health issues, died by suicide when she was 15. “It’s not like that comes out of nowhere,” she explains. “His life was always a very emotionally volatile life for him. And so, as his children, we came along on that ride with him.”

But as one aspect of her life was falling apart, her career was about to take off. Around this time, Cameron, who was living in Los Angeles with her family, was cast in a pilot that would become The Disney Channel’s tween sitcom Liv and Maddie. She played the show’s titular twins for four seasons, winning a Daytime Emmy for Outstanding Performer in a Children’s Series, and went on to star in another Disney property, the Descendants franchise, a series of TV movies about the teenage offspring of classic Disney villains.

Fame didn’t come easy for Cameron. She remembers having a panic attack and hiding in a Nordstrom the first time a fan spotted her at The Grove. “I was like, Oh, this is terrible! I’m not made for this,” she recalls. “So, that was scary, you know? I went from being in high school to that. And you only really know how that’s going to interact with your biology when it happens. Sorry to say, I thought I knew that I was gonna be OK with that, and you just don’t know.”

It took Cameron years to get used to being recognized in public. Oddly, she credits the past year in relative isolation for recalibrating her sense of self. “I had, like, a year where I was just not witnessed by anybody. And I wasn’t recognized ever and I didn’t go to any events,” she explains. “And I think when I could let my nervous system go back to an equilibrium that I had before I was ever exposed to the public eye, then I could kind of heal whatever was not reacting well in me. It used to just send me into a state of terror, I guess, and now I feel like I can tackle it, because… I don’t know. I guess I have a better sense of who I am.”

These days, Cameron finds herself in a whole new phase of her life and career. Last year, she came out publicly as bisexual. She’s dating for the first time. (“I’ve only ever rushed into highly romantic and highly public monogamous relationships that last like four years with straight men!”) She’s finally managed to build a community of musicians and songwriters around her in LA, and she’s looking forward to possibly releasing a new EP at some point. She wants to continue to do it all: music, TV, film, theatre. She’s particularly interested in doing more action and sci-fi. “I have this very specific obsession with Tron, cyberpunk, Ex Machina,” she says. “It looks so f**king fun! And also, it’s like the world that I want to live in. Like in a video game!”

That sounds a lot like what she’s getting to do on Powerpuff. The CW’s upcoming live-action reboot of the beloved ’90s cartoon The Powerpuff Girls has been the subject of much online scrutiny, particularly since it was announced that the network was re-shooting the pilot. Cameron, who plays Bubbles, the sweetest of the superpowered trio, insists that this is entirely normal. Lots of shows get retooled before we ever see them. “But because Powerpuff is such a beloved piece of intellectual property, I feel like there’s this air of conspiracy. Like something big and bad happened,” Cameron explains. “We’re just gonna come back and do it again with some tweaks and maybe a different villain and probably some more expensive shoes.”

An upgrade, an opportunity for improvement. That sounds a lot like the ongoing Dove Cameron project—at least, as Cameron herself describes it. Throughout our conversation, she’s mentioned the ways her perspective has changed in certain things—her drive to perform, her early taste of success, her father’s death. “I think that everything in life comes back to how you feel about yourself,” she says. “I just feel a lot more autonomous and I love myself. It took me a long time to love myself and even longer to like myself. And now that I feel like I’ve done both to the best of my ability so far—until I redefine what that means again—it’s just changed everything. When you don’t hate yourself anymore, the world opens up.” 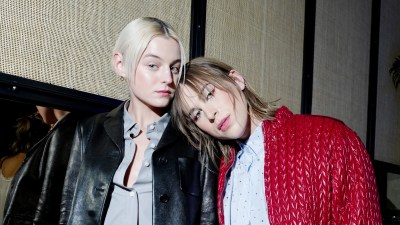