There is a starkly different atmosphere at the Super Bowl in 2021. Just 25,000 people have graced the stadium – 7,500 of whom are vaccinated essential workers – for the showdown between the Kansas City Chiefs and the Tampa Bay Buccaneers. And alongside the usual star-studded performances and satirical commercials, the event took on a different tone, a hopeful one, thanks to an appearance from Amanda Gorman.

Speaking in a pre-recorded video broadcast to an expected 99 million people, Gorman recited ‘Chorus of the Captains’ to pay homage to everyday heroes with special mention to Trimaine Davis, an educator, Suzie Dorner, a nurse, and James Martin, a Marine veteran. “Today we honor our three captains, for their actions and impact in a time of uncertainty and need. They’ve taken the lead exceeding all expectations and limitations, uplifting their communities and neighbors as leaders, healers and educators,” Gorman said.

The nation’s youngest inaugural poet wore a structured coat emblazoned with dazzling crystals as well as a pearl headband. The three honorees appeared on the Super Bowl field in front of the crowd before Dorner initiated the coin toss.

According to reports however, Gorman’s Super Bowl appearance was planned long before her poem in front of the Capitol building. “We first met with Amanda’s team in early November, and then with her at the end of that month, so we’ve been familiar with her talent and power for a while now,” Matt Shapiro, the NFL’s vice president of events strategy, said in a statement to USA TODAY Sports.

“We at the league have been big fans of her work for some time and knew she’d be the perfect person to bring power and unity to this unique moment in an unprecedented year.” 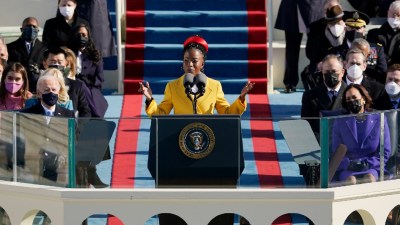