I’ve Worn This Balenciaga Bag for a Decade

A love letter to my Balenciaga Giant City bag 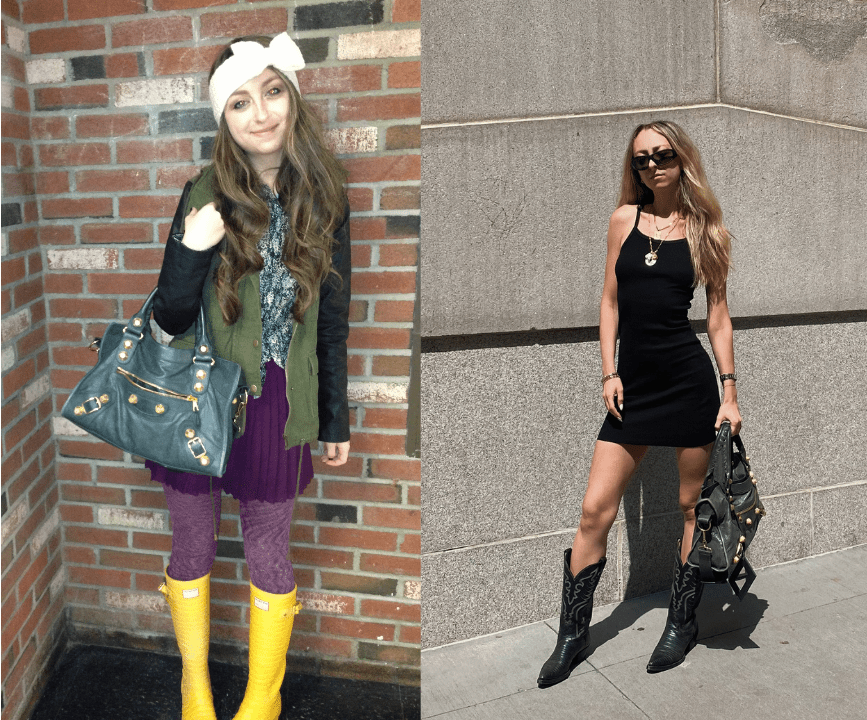 A few months ago, a girl who looked about 19 years old stopped me dead in my tracks and exclaimed, “Omgggg I LOVE your bag! Vintage Balenciaga’s are so sick.” She said this to me as she was sporting the 2022 update and current “It girl” favorite, a Balenciaga Le Cagole bag.

That’s when it hit me. I am finally old enough to have lived through a bag’s lifecycle. My Balenciaga Giant City that I got at 16 years old is cool again. Actually, scratch that. The bag has always, and will always be cool. Let me tell you why.

The iconic “Motorcycle” (now called “City Bag”) came out in 2001 designed by Nicolas Ghesquière at the start of his tenure as Balenciaga’s creative director. You cannot even mention early 2000s fashion without recognizing the absolute chokehold these bags had on our favorite celebrities. The top-handle bag with a tote-esque shape and a cross body strap, was beloved for its slouchy leather and edgy hardware. Balenciaga moto bags were spotted on the arm of every Hollywood starlet like Paris Hilton, Nicole Richie, Mary-Kate and Ashely Olsen, Disney stars like Vanessa Hudgens and Ashley Tisdale — the list goes on.

From Starbucks runs to shopping trips, this bag was the companion of every single It girl. And I needed one. At 11 years old, I declared that I would, one day, own this bag. It was the key to fulfilling my It girl prophecy, and who can disagree with destiny? Surely not me. So, I manifested it. I decided I wanted the Balenciaga Giant City bag, because I am a go big or go home kind of gal. The Giant City featured oversized hardware that adds about seven pounds to the bag when it’s empty (not to be confused with the Classic City).

For years I had pictures of this bag plastered around my room, imagining myself in an oversized pair of sunnies, a McQueen Skull scarf, and my City bag. Eventually the day came, for my 16th birthday I got a Balenciaga Giant City bag with gold hardware in the color Anthracite. Now as I approach my 10-year-anniversary from the day I got my beloved bag, I’ve realized how much of a constant this accessory has been in my wardrobe.

I got it just as I began to develop my personal style and experiment with fashion. It has held up through endless style evolutions, bad trends, and wardrobe revamps. A decade later, this bag still has the same cool-girl effect. In fact, it’s even gotten better. The beauty of a Balenciaga bag is that it’s made to be well-worn. The leather only gets better with time and wear, so the more beat up the better.

Now, let’s take a trip down memory lane and break down some of my favorite (and not-so-favorite) looks. 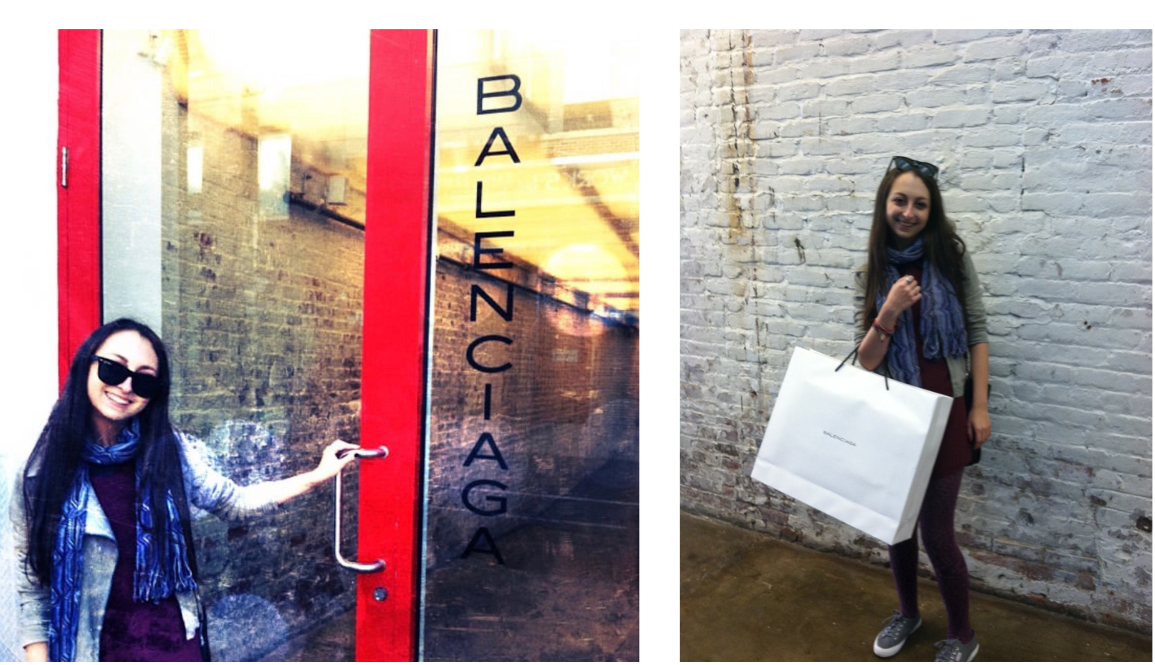 It was 2012, so please note the INSANE filter. Right before my 16th birthday, I Instagrammed this photo with the caption, “The day has come.” It was when my “It girl” origin story began. 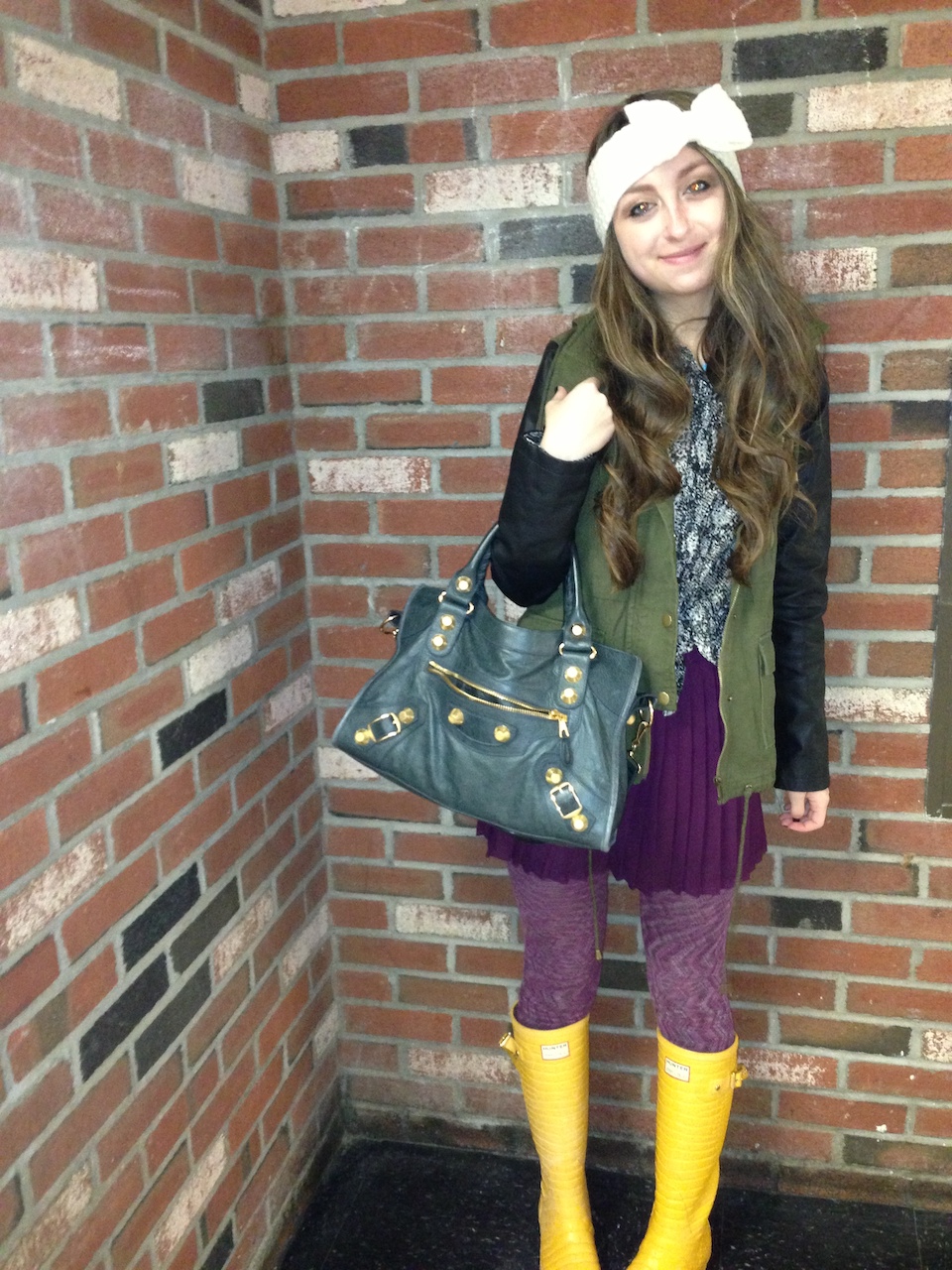 16 years old. We are playing with color, mixing prints, and wearing questionable headgear. Clearly, I was still discovering my personal sense of style. The purple Missoni tights paired with the yellow HUNTER by Jimmy Choo rain boots was a choice. But, I had my City bag which added a much needed cool-factor. 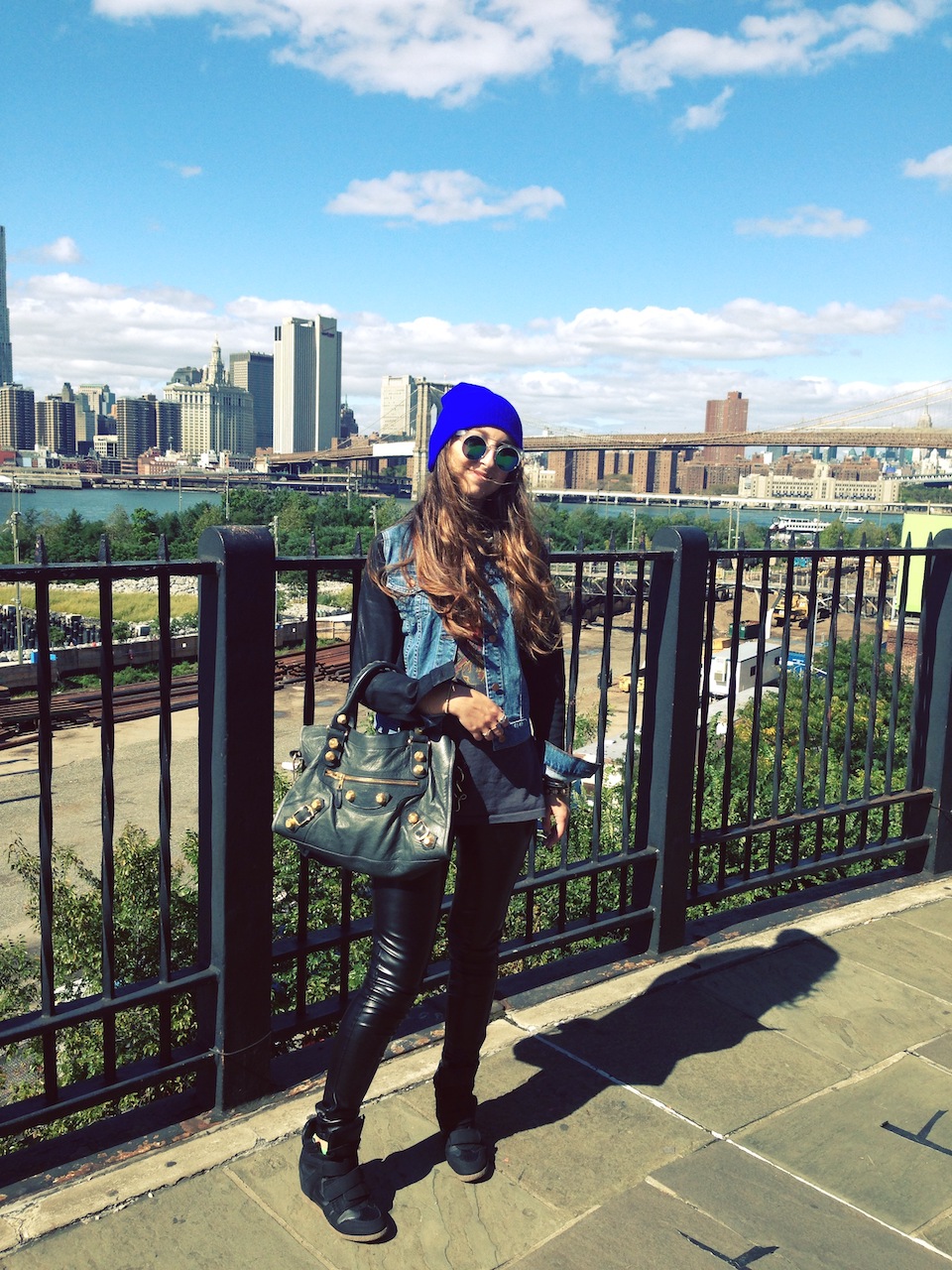 16 years old. The sneaker wedges, graphic T-shirt, and beanie…it’s giving Tumblr. I thought I was the coolest girl in the world, you could not tell me s**t in this outfit. And at the time, this was a look. I was going for effortless cool girl, off-duty vibes and thanks to the bag, I think I achieved it. 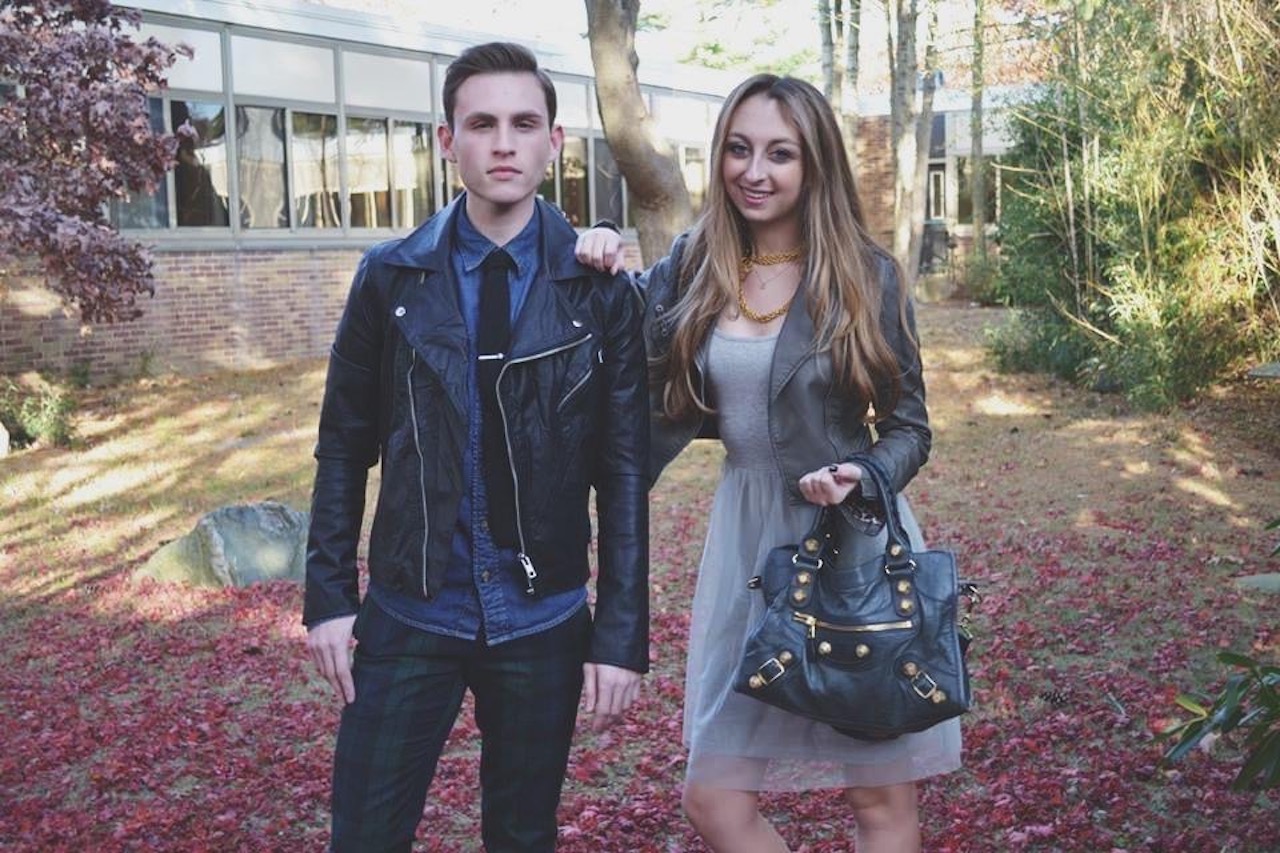 17 years old. I got blonde highlights and won “Best Dressed” senior superlative with my best friend since kindergarten (hi Adam!). Nothing could stop me. All the other superlative winners took their photos in the hallway or cafeteria, Adam and I had other plans. We executed an editorial style photoshoot after school. In my Carrie Bradshaw-inspired look I knew one thing was for sure, that damn City bag was going to be immortalized in my yearbook photos.

18 years old. We are officially in the age of Instagram. With a year of college under my belt, I am finally wearing this bag the way history intended, up in the club with a messy smokey eye, paying homage to my personal forefathers (Paris and Nicole). 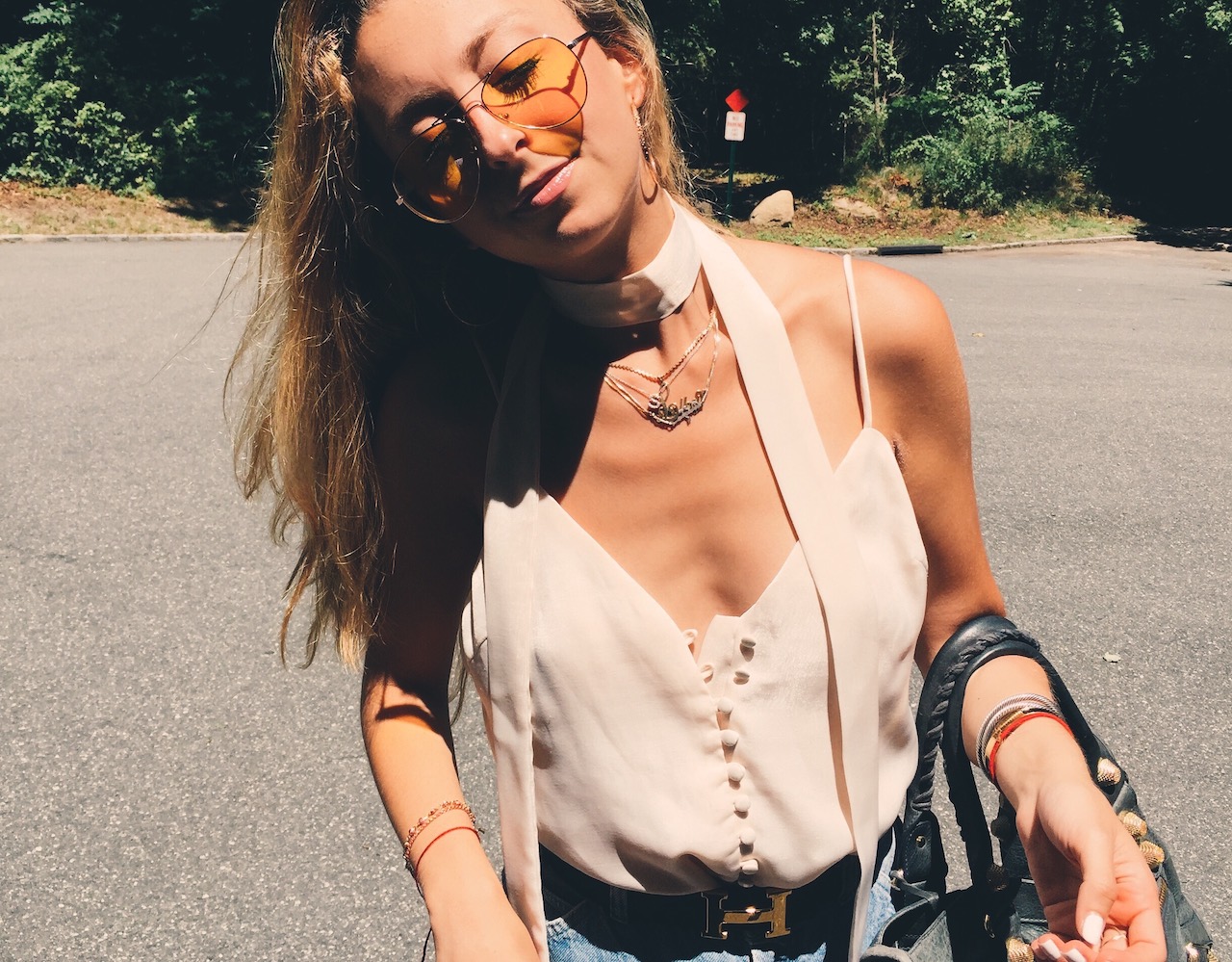 19 years old. I had a fashion blog that summer. I forced my brother to be my personal photographer. We staged a shoot while I was sporting my City in a cul-de-sac on Long Island… just as Ghesquière intended! The looks are so 2017 and these photos cause me physical pain. The Vans, the Thrasher T-shirt??? I haven’t been within a six-mile radius of a skateboard let alone ever rode one…it’s giving fraud. Anyways, regardless of how heinous these outfits are, it just goes to show the lasting power this bag has had on my wardrobe and personal style evolution. It’s got me through the good, bad, and the ugly. 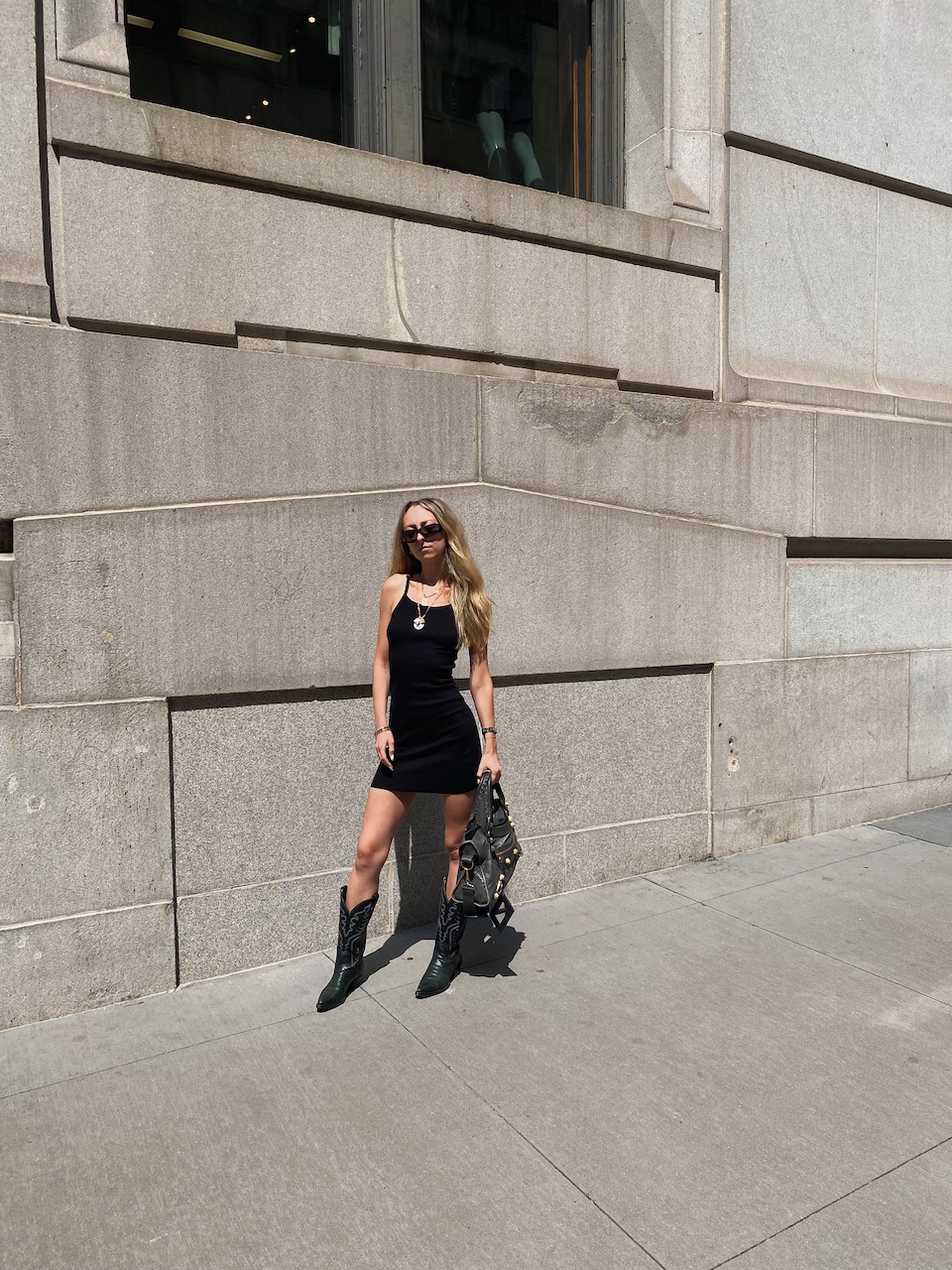 25 years old. These days, I wear my Balenciaga Giant City bag with an outfit that pays homage to the It girls that raised me. Just as my predecessors did in the aughts, I kept the look simple — remember, it’s all about being effortlessly cool with a hint of disheveled. Let the bag do the talking. Can I transition to the club? Absolutely. Or am I coming from the club? Who knows! What I do know is that this bag takes this simple LBD and elevates it. A decade later, the power of this bag is absolutely unmatched.

I loved my Giant City so much that I got a Mini City in red! That’s a story for another time.

Get yourself a PRE-LOVED Balenciaga Giant City Bag

The exact style is no longer made, but thanks to a plethora of resale sites you can own this bag for an amazing price!

Dua Lipa Is the Ultimate Bottega Veneta Babe
Next page