For The Dreamers. Simon Porte Jacquemus Delivers A 10 Year Anniversary Show To Remember

A mantle of brilliant lavender in full bloom. Whorls of white butterflies. The soundtrack: the dim hum of bees in chorus. And in between it all, a single, seemingly infinite stretch of pink carpet, the stage for Simon Porte Jacquemus’ 10 year anniversary show, “Le Coup De Soleil” (or “The Sunstroke” in English, befitting for an already stifling summer in the South). Rising above the rolling lavender fields of Valensole in Provence, a stream of both men and women walked together for the first time in a show which honoured a decade of a brand so loved by so many.

This history came full circle in the form of Provence; Jacquemus’ hometown, and in the form of summer, a season he seems an eternal patron of. It was a setting so spectacular, so dreamlike, many pondered whether it could be the most beautiful runway they’d ever witnessed, a “made for Instagram” moment in a world of plenty. But for Jacquemus – the eternally sunny boy from the South – the surreality, the Provençal cliche of it all was intentional. “I wanted a place that looked like a postcard — almost too much like a postcard, even. It was important to me to turn that cliché into something artistic, with that pink line running through the middle like a contemporary art installation by Christo, or a painting by David Hockney,” the designer told WWD.

And like a painting it was. Many have compared the young prodigy to Karl Lagerfeld, a comparison which after yesterday’s magical show seems even more compelling. Much like Lagerfeld, a master of realising fantasy, Jacquemus too has an incredible knack of telling – and selling – a dream. Like his inimitable predecessor (and a hero of his), he takes us on an experiential voyage into his mind; a restless, fecund imagination played out via a momentous stage and equally momentous appendages. Yesterday’s show the apogee of such; he built the dream and we all wanted to be there, we all want to wear those clothes, we all want to part of that fantasy.

And despite the marvellous spectacle of it all – it was arguably his strongest collection yet. Of course, the truisms of the house were there; the micro, micro minaudières with heavy top-handles, brimful straw hats and abstract heels, but this collection was so much more. He was celebrating after all, why not stage the ultimate sartorial party?

The first look alone was starkly different to the gauzy micro dresses and equally micro handbags of seasons past. Filmy, laser-cut lace in soft peach sat layered against a tough white pantsuit; gloriously idiosyncratic and delicately beautiful all the same. A tidal of gelato colour followed, including 35 sunny prints, cargo accents, lavender sachets, soft tailoring, 380,000 Swarovski crystals and of course, sun hats and tiny bags, it was a sumptuous feast savoured by all (including the bees).

“This collection is not at all about Provence. It’s about the codes of the house, about other places, about all these women who have inspired me that were not from here, who were overdressed, and these guys who wear too many prints, but who still look cool,” he told WWD. This new fascination with print a particular highlight; bucket hats sprouting cornflower blue gerberas, artichoke shirts, painterly shrub and abstract brushstrokes, a striking mélange of wild print which was pleasingly cohesive despite its incongruity.

But perhaps the most poignant moment came at the end. Pointing to the sky, to his beloved maman, it was for her. “FOR YOU…MAMAN AND HUGE THANKS TO MY TEAM….FOREVER.” In fact, it’s all for her. The entire Jacquemus brand a kind of creative dedication to the woman he loved most, and whom died suddenly at age 40, ripping his heart out but kindling a burning passion for design. 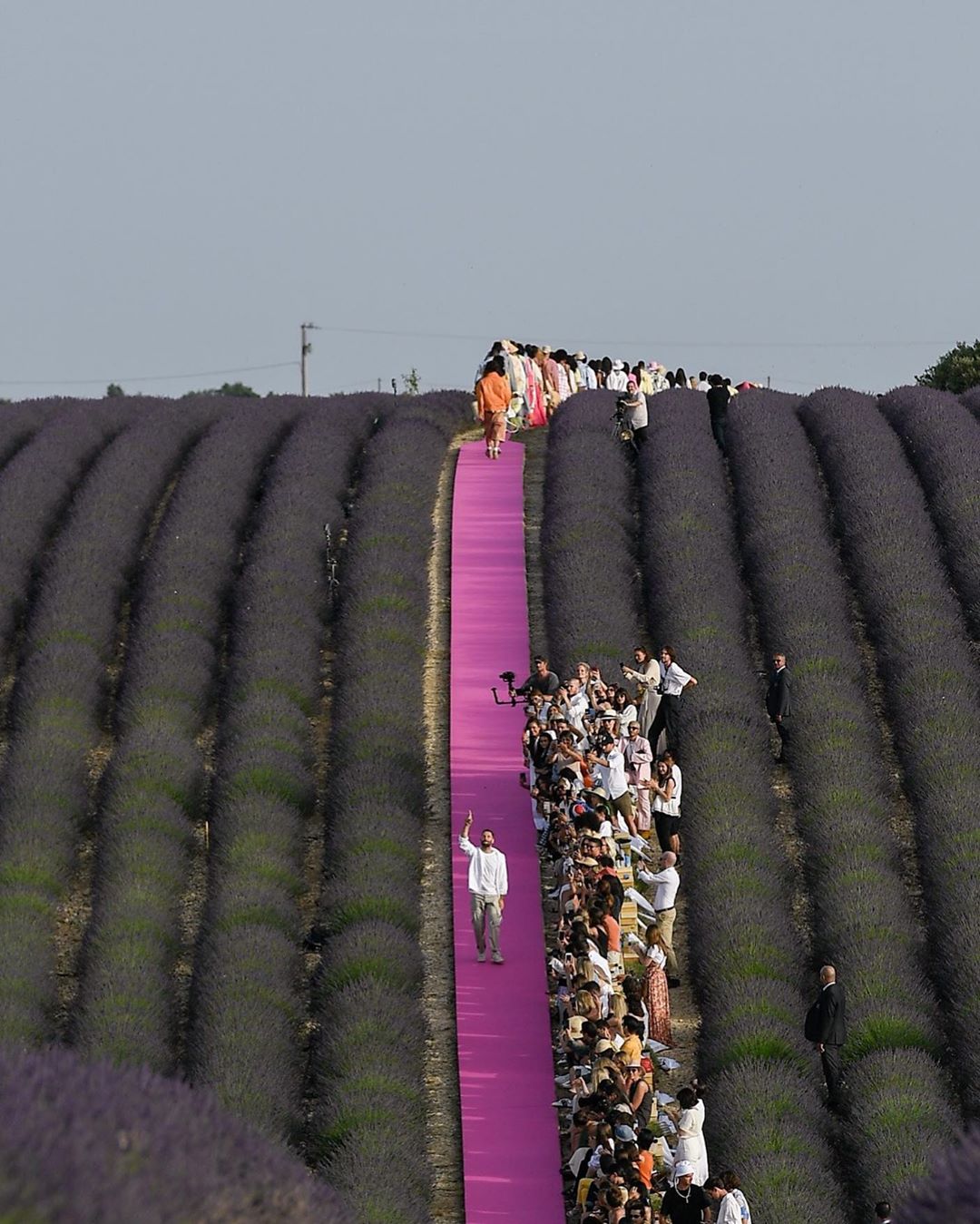 As always, the 29-year-old designer makes clothes – and stories – for her, and the dreamers, evoking this kind of surrealist wonderland you want to so desperately be a part of. It’s also a world every fashion-ready celebrity wants to be a part of. His pull in popular culture is hard to quantify, but consider this: when Beyoncé is buying pieces from your online boutique on her own accord, it’s big. Unlike other designers, Jacquemus doesn’t use his designs as a kind of influencer currency; all the girls who wear his garb, his teeny-tiny handbags, his ornamental heels, do it because they love the brand, genuinely. It “is the biggest compliment,” he tells Vogue UK. “Not just because they are a star, but because they have everything and they chose to wear Jacquemus.”

Ingenious, visionary, joyous; there are many superlatives to describe the boy. But above all else he is happy, and that’s the way he wants to be. “When people ask me where I see myself in 10 years, I say happy. I want to follow something that drives me to happiness.”

At the afterparty, a kind of makeshift campsite in the foothills gleamed with festoon lighting. In the soft amber glow, Whitney Houston’s I Wanna Dance With Somebody played. For the boy who loves to dance, it was a fitting finale. His team, his family, his friends danced. As for his maman, she was no doubt watching, dancing from above. And she would be proud.