Selena Gomez has never been predictable when it comes to her career choices, particularly as they pertain to her music career. Rather than continue to release the same upbeat pop songs made famous by her former Disney peers, Gomez has never been afraid to go in a slightly different direction with her sound.

Her last album Rare saw the singer dive headfirst into delicate downbeat refrains, while its predecessor Revival featured sultry musical renditions of a life in relative turmoil (she was distinctly on-off with ex Justin Bieber at the time). And now for her latest trick, Gomez is switching gears yet again by releasing a Spanish song, titled De Una Vez.

Announcing the song – which translates to ‘at once’ in English – and its accompanying video on her Instagram, Gomez wrote in Spanish of her latest musical foray, “De Una Vez is out now. This is the beginning of something I’ve wanted to explore for so long. I hope you love it as much as I do.” It marks the first single from her upcoming album, Baila Conmigo (Dance With Me). Gomez further explained her decision to venture into Spanish pop music in a statement. “I am incredibly proud of my Latin background. It felt empowering to sing in Spanish again.”

The song deals with themes of heartbreak and overcoming mental hardship, which reconciles with Gomez’ own personal struggles. After enduring an extremely public drawn-out split from Bieber several years ago, the 28-year-old confronted several health issues, including a lupus diagnosis that saw her receive a kidney transplant, as well as several stints in treatment for anxiety and depression. “I am stronger on my own,” Gomez sings in the music video, wearing a silk floral Rodarte dress replete with puffed sleeves and an illuminated sacred heart in a nod to Gomez’s heritage. “I don’t regret the past, I know the time I spent by your side. Cut off my wings, but now my chest is bullet proof.” 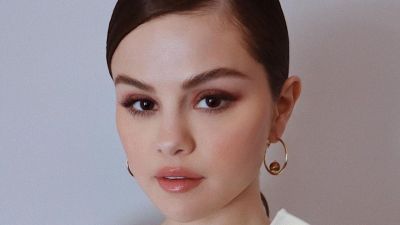