Many in the UK and around the world have tuned in to watch the state funeral of Prince Philip, who died last week aged 99. And while many are keen to pay their respects to the late Duke of Edinburgh’s life of public service, others are tantalised by the first public reunion of Prince Harry and Prince William since Harry and Meghan Markle’s bombshell interview with Oprah Winfrey.

Reports that the brothers’ relationship had grown frosty in the years since Harry met and married Markle had been circulating for years, but few knew the extent of the rift until the Oprah interview aired last month. Among the accusations made by the Duke and Duchess of Sussex was that Prince William’s wife, Kate Middleton, had made Meghan Markle cry in the lead-up to her 2018 wedding (and then allowed the press to recast the story with Markle as the villain); that Kensington Palace had refused to get Markle psychological help when she was suicidally depressed because of fears of bad publicity; and most disturbingly, that concerns were raised over “how dark” Meghan and Harry’s son Archie’s skin would be.

Prince William responded to the allegations with a succinct assertion that the royals are “not a racist family”, and revealed that he hadn’t spoken to his brother since the interview aired. But all that changed when the brothers’ beloved grandfather, Prince Philip, died last week. Prince Harry rushed back to England for the funeral, leaving a heavily pregnant Meghan back in Los Angeles, and many wondered if this family tragedy might help mend the rift.

After today, this seems unlikely. During the funeral procession, Harry and William were physically separated by their cousin Peter Phillips. During the service itself, the brothers sat on opposite sides of the church. The separation of seating was partly due to Covid-19 restrictions that saw members of individual households cluster together. But so far as symbolism goes, it was a striking image to see Prince William, Kate Middleton, Prince Charles, Camilla Parker-Bowles, Princess Eugenie, Princess Beatrice, and their two husbands, sit on side of the room, with Prince Harry and Prince Andrew among the few recognisable faces on the other side. In the royal family, there are very few coincidences.

Much like the Sussexes visibly frosty reception at Commonwealth Day celebrations last year—their last official outing as full-time working royals—the visible distance between the two brothers will do little to quell rumours that their falling out is far from over. In footage taken after the funeral service, Harry, Kate, and William—once a much-loved and close-knit trio—are filmed walking together. And while they exchange a few words, you don’t need to be a body language expert to pick up on the palpable tension.

Here’s hoping that things can improve for the brothers, whose fraternal bond captured the heart of the public following the tragic death of their mother, Princess Diana, in 1997. 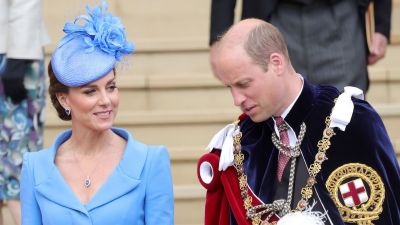