The late royal had a penchant for Savile Row, and was a quiet icon of British menswear

Funeral arrangements for the late Prince Philip, who died aged 99 late last week, are underway, as the world continues to unpack the cultural legacy of the Queen’s late husband. Fans of The Crown will know that the Prince was a complicated and imperfect man, guilty of many an awkward public gaffe. But there’s no doubting his lifelong dedication to public service—which culminated in more than 20,000 public engagements in more than seven decades. He was still a working royal up until his 96th birthday.

Philip has also been celebrated for his life-long support of the Queen. His well-documented role as Elizabeth II’s confidante, advisor, and sounding board during their 73 year marriage has been framed by some as inherently feminist, a positive example of a relationship in which a husband puts his own ambitions aside to allow his wife to lead. “He showed the world what it meant to be a supportive husband of a powerful woman,” said Barack Obama. “Through his extraordinary example, he proved that true partnership has room for both ambition and selflessness.”

There’s certainly no doubting the Queen’s enduring commitment to Philip, who she fell in love with aged 13, and who she married aged 21, a few short years before her coronation. She has already said his death leaves “a great void” in her life.

A lesser-discussed aspect of Prince Philip’s legacy is slightly more superficial—his style. Seeing as he was a public figure for almost eight decades, traversing the hefty archive of existing images of the Prince is to experience a masterclass in timeless, sophisticated menswear. From the military garb he wore to marry the Queen in 1947, through to his penchant for beige-toned sportswear and his sizable rotation of Savile Row suits, Philip perfectly embodied the right kind of nonchalant elegance that continues to tantalise men and women the globe over.

Here, we celebrate his most memorable style moments. 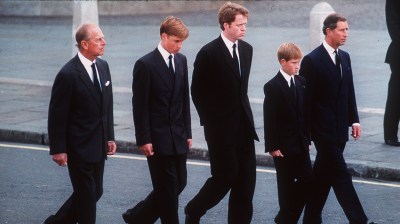