Behind the scenes at Mardi Gras with Jesinta Campbell

“When the news broke the Sydney Swans would participate in the 40th Anniversary Gay and Lesbian Mardi Gras parade I was so excited and proud – I knew I had to be involved.”

“The Swans are the first official sporting team to have participated in the parade making the occasion even more momentous. LGBTIQ pride is one of the four pillars of the club’s diversity action plan and a huge part of their mission to make everyone feel welcome at the football.

“Living in Sydney, the annual Mardi Gras celebrations are something you cannot miss. Oxford Street is shut down and filled with masses of people to celebrate and march for LGBTIQ pride. Having started in 1978 with a much smaller group of people protesting for rights within the community, it’s now bigger, better and more sparkly than ever with hundreds of organisations, companies and groups of people involved. Ever since I’ve been a part of the Sydney Swans, I have really admired the work it does in the community, especially around diversity.

“Many of my friends and some family members are gay or lesbian and to know that they can come to the football and feel safe and included is really important to me and my husband. 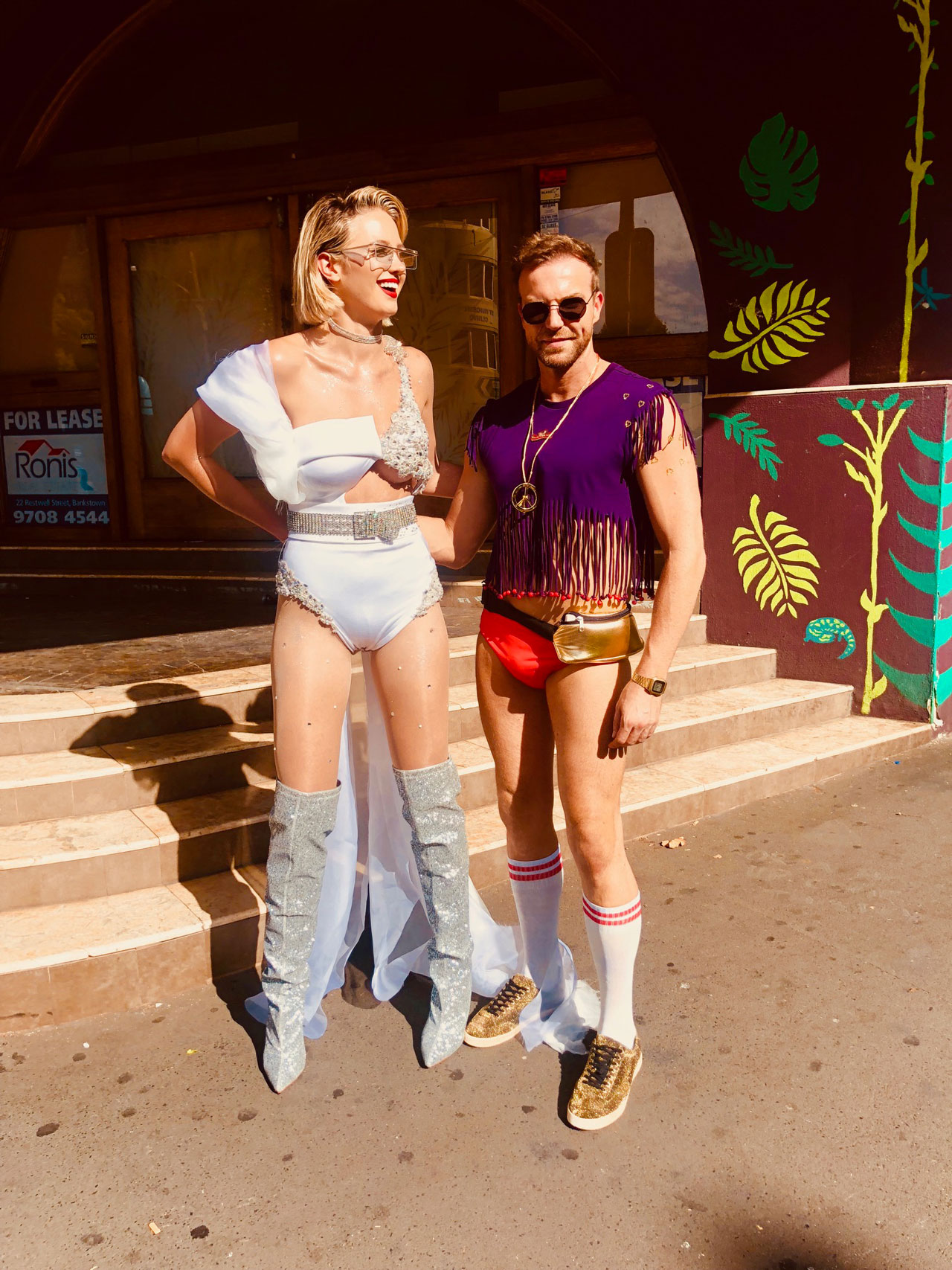 Campbell with friend and makeup artist Michael Brown before the parade
Credit: Jesinta Cambell on iPhoneX

“When big corporations like the Swans make a statement like this it filters down into society and has a huge impact on not only the people involved at the club but also the surrounding community. For this reason, I asked if I could be involved with the parade. Whilst I have supported and watched from the sidelines for many years my husband and I were really keen to be in the parade to show our support for such an amazing community and for our family and friends.

“Unfortunately, due to Lance’s football commitments, he wasn’t able to participate (he had to play a game in Brisbane) but I still wanted to fly the rainbow flag on behalf of us to show our support and commitment to equality and diversity within our community. I met so many amazing people on the night and had such an incredible time getting to know everyone’s stories and sharing in the excitement of being a part of a history with the float.

“The first people to march ended up in jail. Today people who march end up celebrating equal love, diversity and freedom at a huge after-party with thousands and thousands of people.”

“I had a moment during the parade where I teared up thinking about how it all started and the contrast in experience people now have in the parade in comparison to the protestors who courageously marched down Oxford street to generate awareness of their struggle and their fight for equality.

“Thank you to the Sydney and Rainbow Swans and all the incredible people I met on the night for such an amazing experience I will remember forever. I took some pictures on my new iPhoneX, which I feel captured the joy, happiness and spirit of the day and my experience. If you weren’t there I hope these pictures provide you with a little bit of the love that was all around at Mardi Gras 2018.”

GALLERY: MY MARDI GRAS IN PICTURES

EN ROUTE TO THE PARADE with my Aunty Creina. She flew up from Melbourne for Mardi Gras. It was her first time attending and it meant so much to me to be able to march side by side with her in the parade. 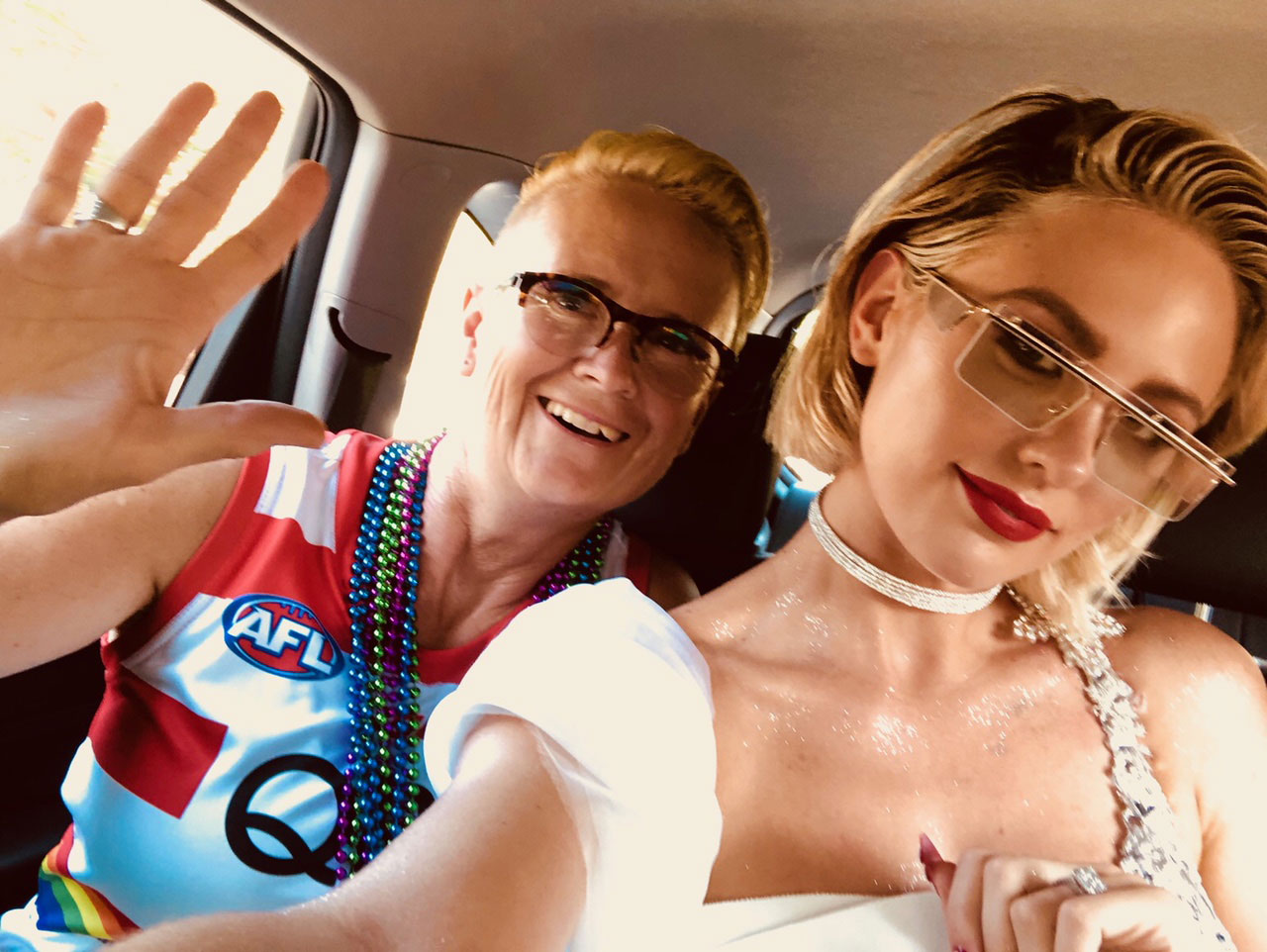 ALL GLAMMED UP and covered in glitter. I love that I got to dress up like this in collaboration with my stylist Jess Pecoraro. It was so much fun trying out something so different. We worked with Sonia at Cappellazzo Couture on this custom creation. Two weeks later, there’s still glitter all through my house. 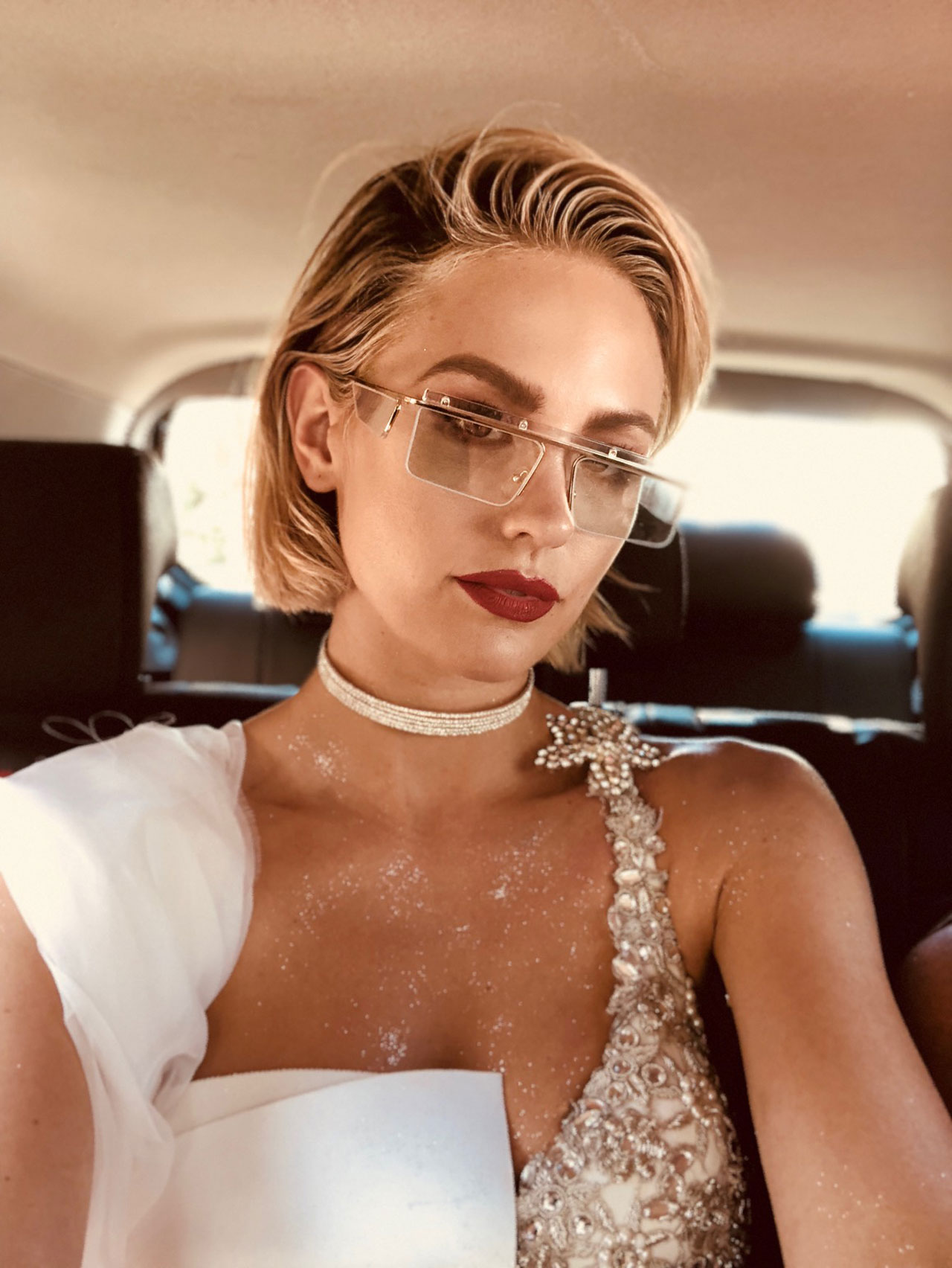 MY THREE GOOD FRIENDS Adam Finch, Dave Willey and Vincent Rommelaere were part of a float called GlamCocks, so we met them all at a pub in Surry Hills before the parade. The energy was amazing, lots of laughs and so much excitement. 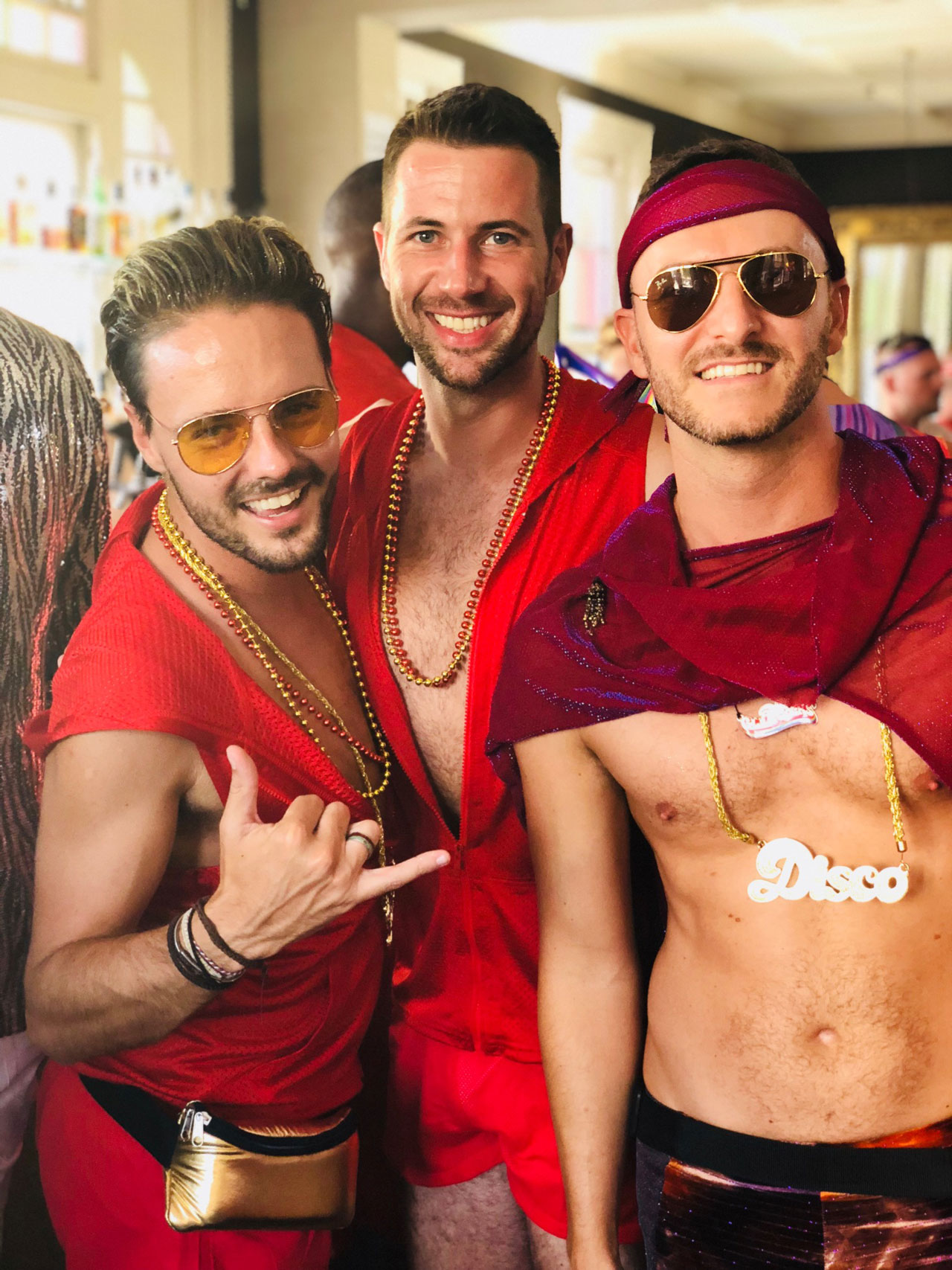 ONE OF MY FAVOURITE THINGS about the Mardi Gras parade is that everyone can express themselves free from judgment. I love seeing all the costumes and outfits and so many smiles on everyone’s faces. 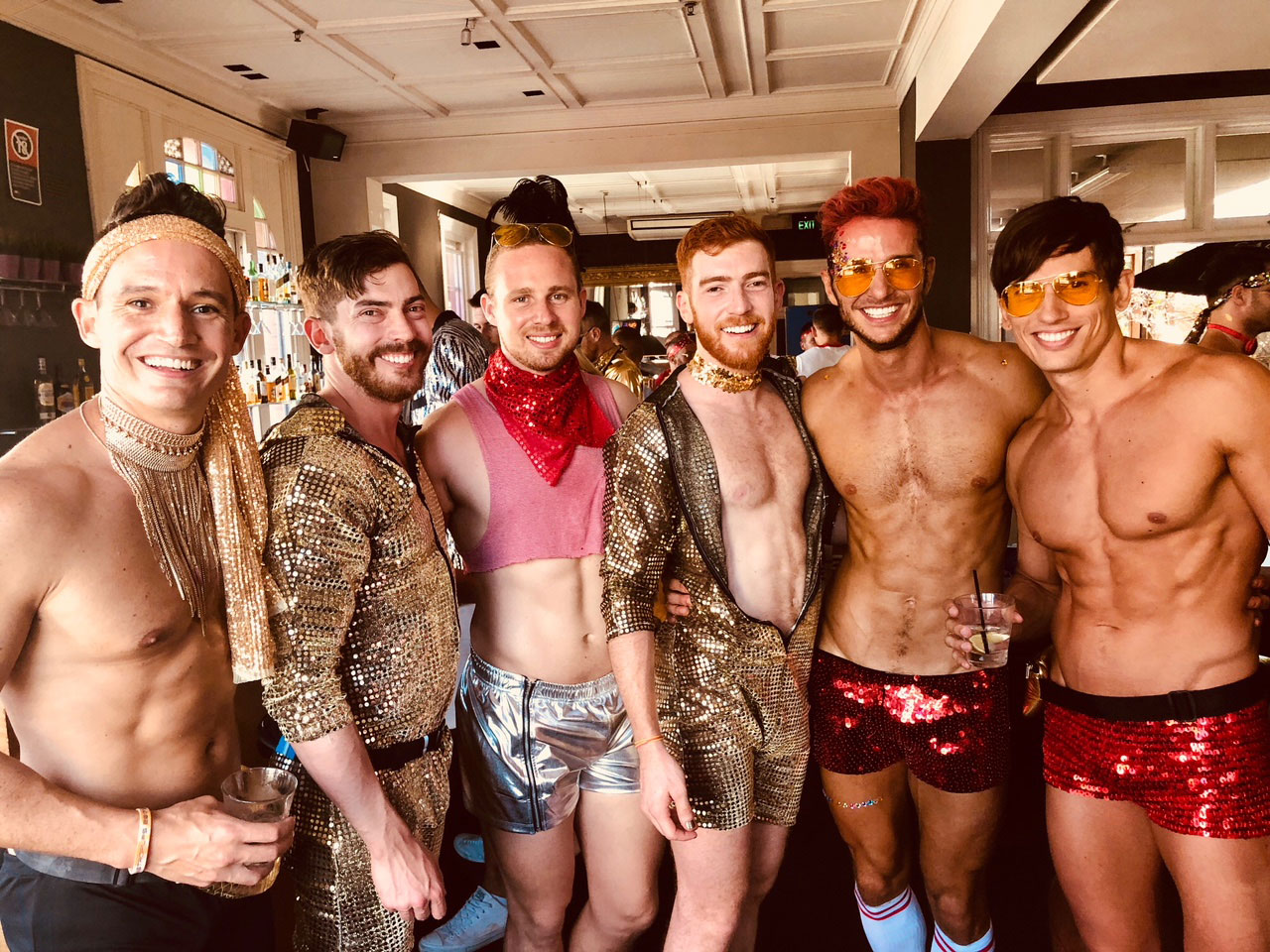 MY AUNTIE REPRESENTING the Sydney Swans and my good friend Andrew Sklar. I could not get over the quality of the pics I was taking in portrait mode on my iPhone. 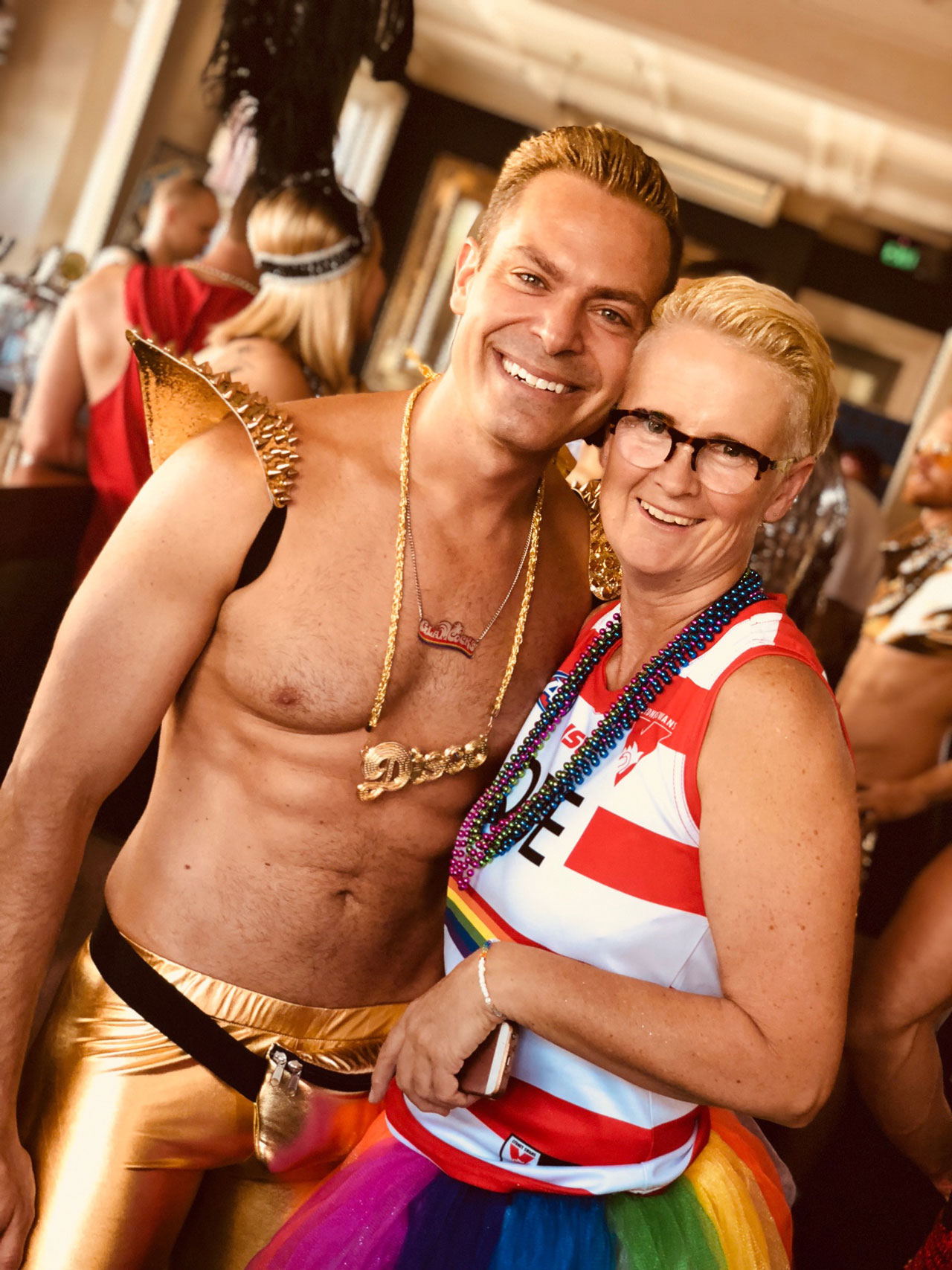 GOT TO LOVE A GOOD SELFIE! This is my gorgeous friend Courtney Whale, Aunty Creina, myself and Mark Evans. Can we dress like this every day? 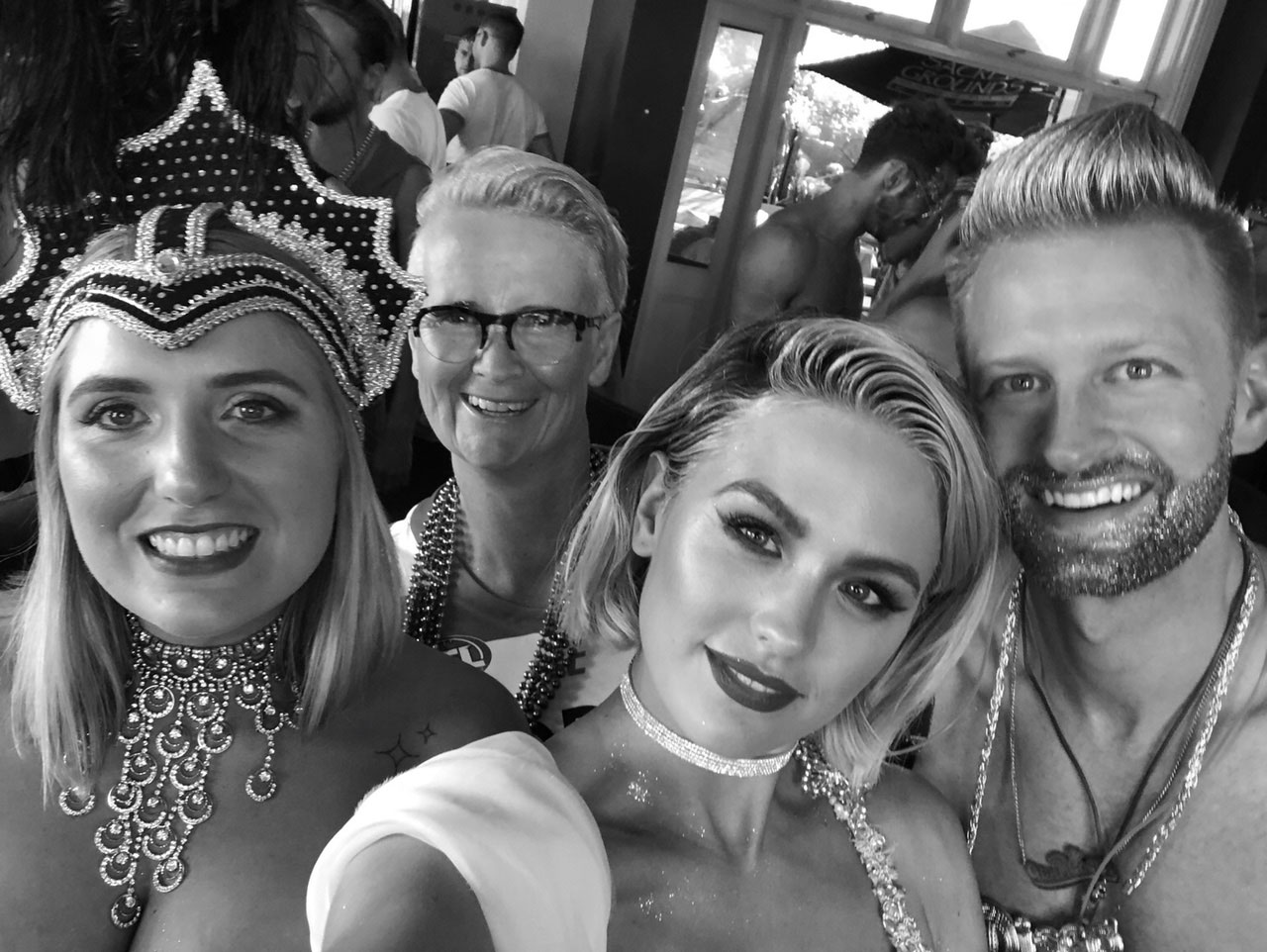 THE BEST THING ABOUT MARDI GRAS is that it brings together so many people from all different walks of life. This is Greg’s parents, Peter and Val, supporting their son and his Husband Andrew in the parade. 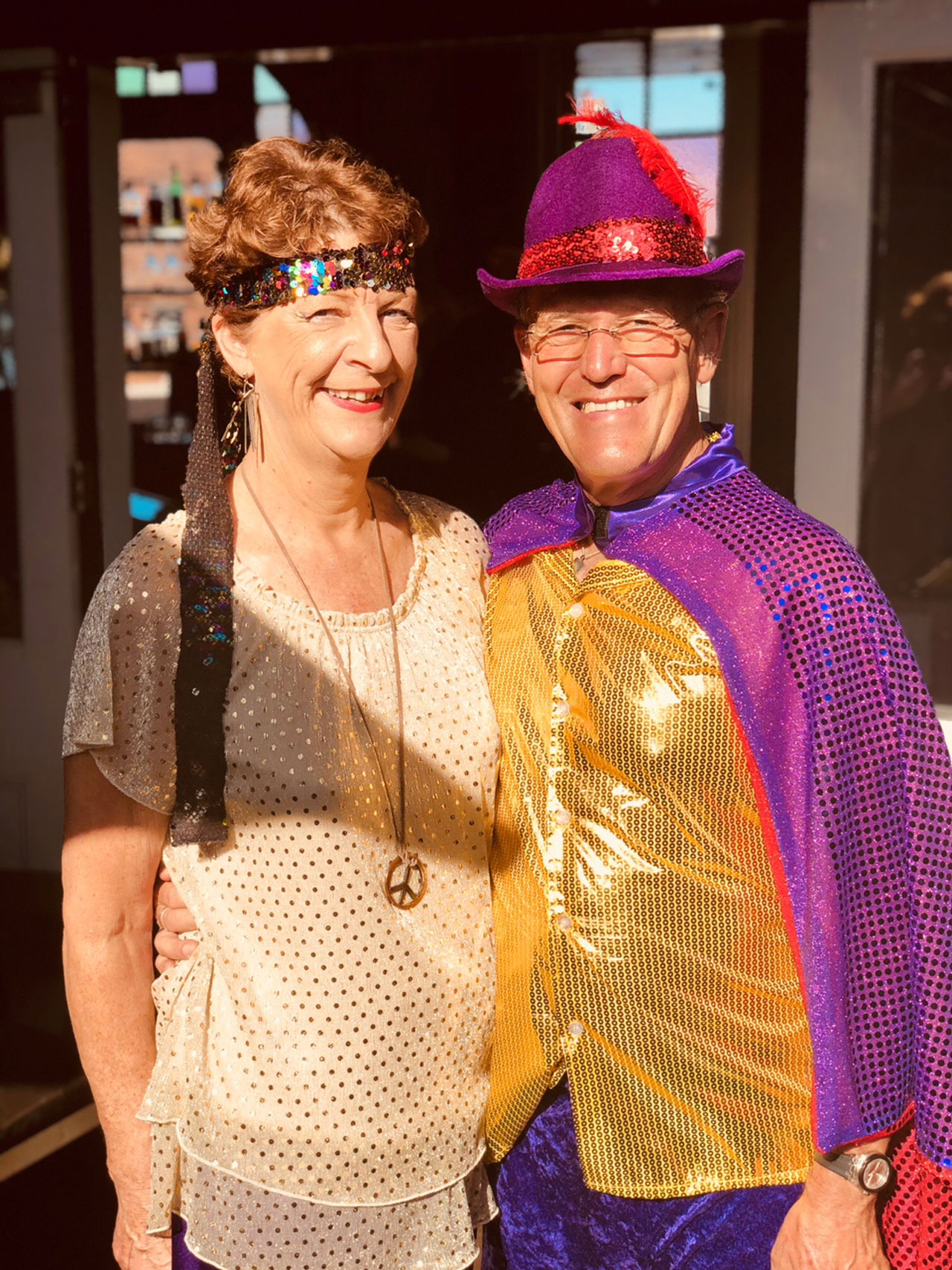 SO MANY SMILES AND LAUGHS with Adam Loved the disco theme he went for paying tribute to the ’78-ers who started the parade. 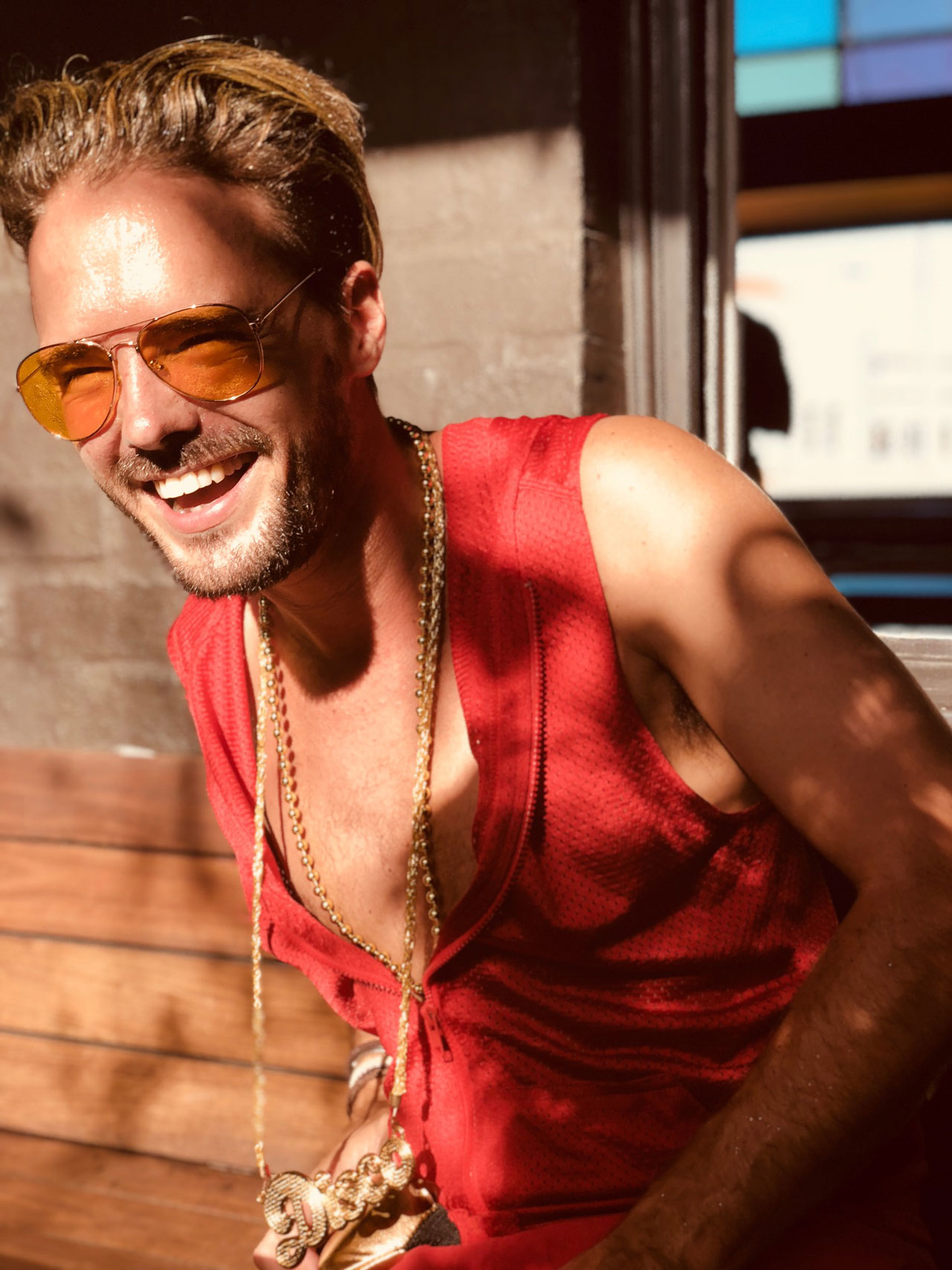 GLISTENING IN GOLD. This is my close friends Alex Rathegeber and Tom Bunting. 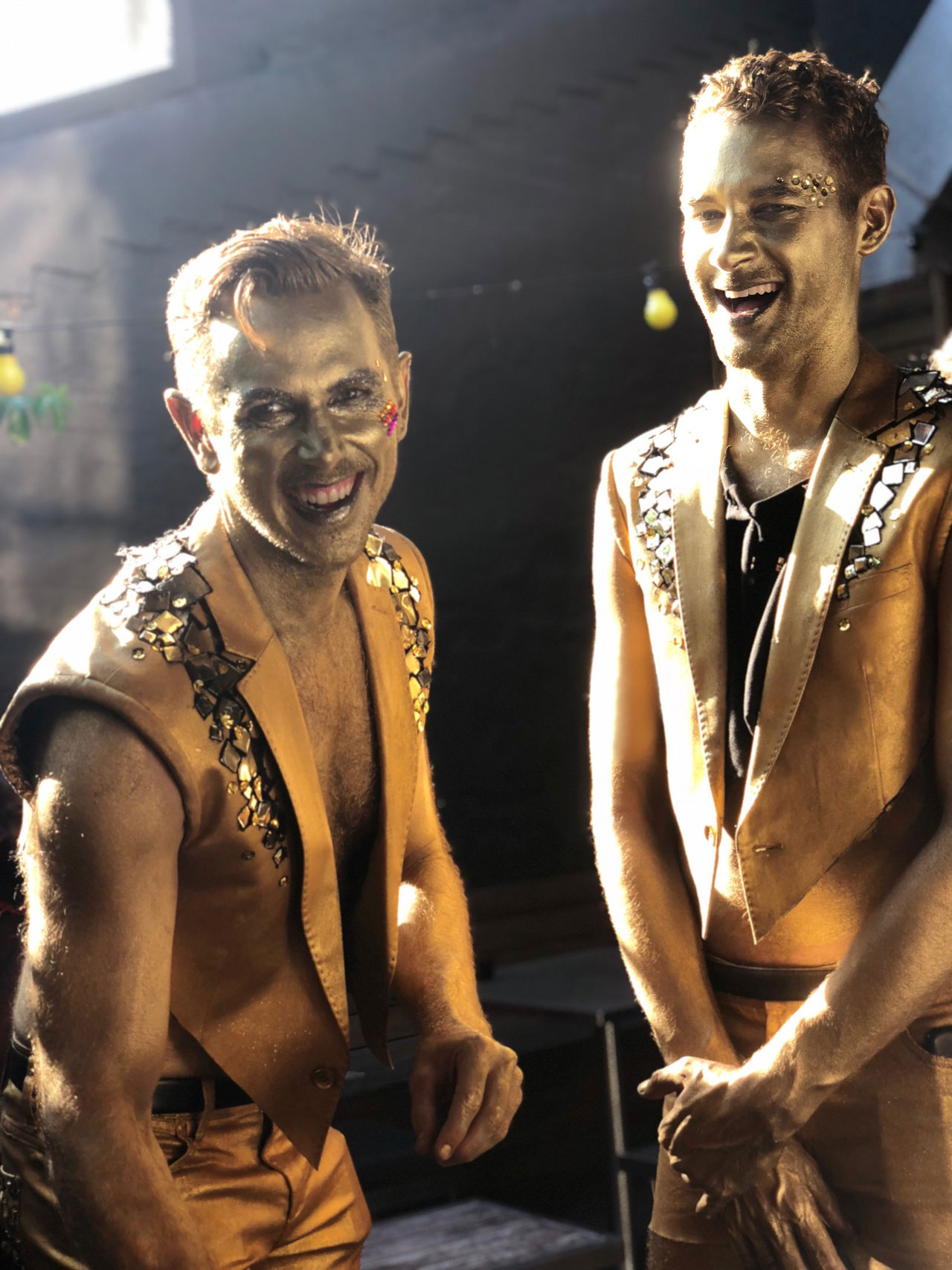 LAST MINUTE SPARLING APPLICATIONS. When everyone got to the pub we put lots of glitter on us and had little gemstones to add. The afternoon light was so beautiful on the balcony, I wanted to try out the portrait mode on my new iPhone X. I used Stage Light mono to create this effect. 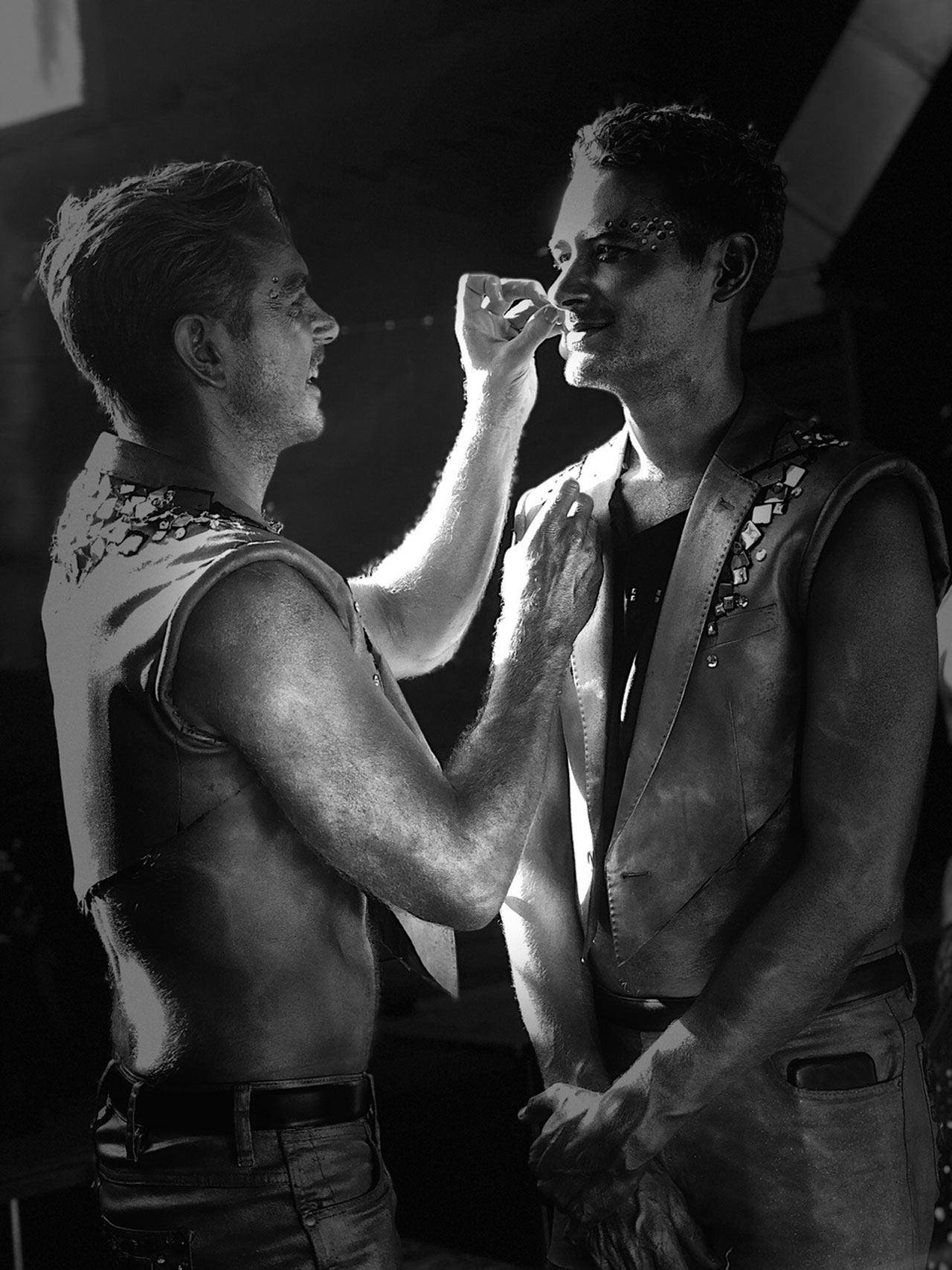 READY TO HAVE FUN and march for pride with Michael Brown who looked after all my glam for the day. We had so much fun getting ready together. 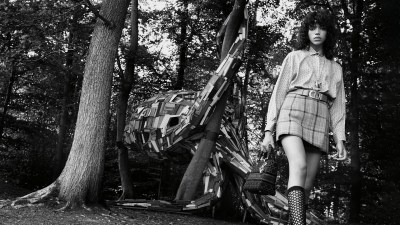 What will it take for the fashion industry to maintain its relevance in society? By Guest Editor Maria Grazia Chiuri 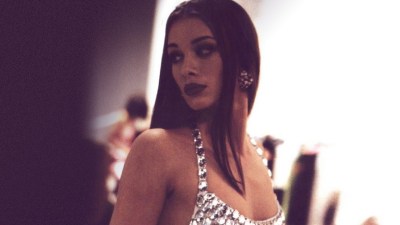 The 7 Stages Of Outfit Grief 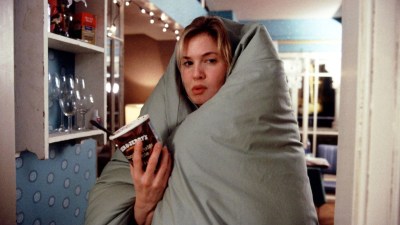 The Downward Spiral To Sloth-Dom. How Pj’s Have Become The Wider Fashion Currency 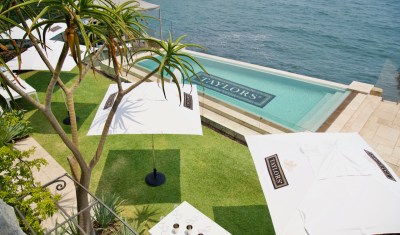 Sydney And A Chilled Red. Introducing You To The Perfect Weekend
Next page