Real Housewives Of Beverly Hill’s Dorit Kemsley was reportedly held at gunpoint on Wednesday night in a terrifying home invasion. She had been home for just one day since returning from a trip to London. The reality star was at the Encino, Californian home with her two children, Phoenix and Jagger, at the time.

According to Page Six, a spokesman for the Los Angeles Police Department said it took place at roughly 10:50pm, involving three male suspects. It’s unknown how much was taken from the property. No arrests have been made at the time of publishing and the LAPD could not confirm if she was held at gunpoint.

The Daily Mail reports that the intruders entered via smashing the children’s classroom door. Kemsley was asleep when two suspects entered her bedroom and woke to them frighteningly standing at the foot of her bed.

“Don’t hurt my babies. Don’t kill me,” she allegedly begged the intruders, per the report. “I’m a mother.”

To which one of the suspects allegedly responded, “Kill her.”

The intruders were at the property for 20 minutes. The 45-year-old then called the police and her husband, Paul “PK” Kemsley, who was in London at the time.

Reports suggest she is still at the family home and has had visits from RHOBH alumni Erika Jayne, Lisa Rinna and Teddi Mellencamp. Understandably she is reportedly left “traumatised” by the incident.

The crime is reminiscent to the harrowing robbery Kim Kardashian was subject to during a trip to Paris in October, 2016. Three men were eventually arrested and charged in the incident which also involved the reality star being held at gunpoint. The attackers were caught when a nail salon camera captured their faces in a “million-to-one chance”.

Our thoughts are with Kemsley and her children. 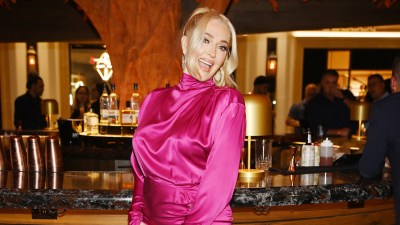 Erika Jayne Is Reportedly Back On The Dating Scene
Next page