She was half of the most celebrated design duo in recent times, but popular creative Maria Grazia Chiuri has bid farewell to her dear friend and workmate of more than 20 years, Pierpaolo Piccioli at Valentino, to take up the top job at rival house Christian Dior.

Dior CEO Sidney Toledano has finally confirmed to Women’s Wear Daily the most buzzed about secret in the fashion biz this year (we called it here a month ago!): that Chiuri – she of the occasional pink hair, statement jewellery and quirky-chic red carpet outfits – has been chosen for the plum creative director job. Which to put it into context, is kind of like Domenico Dolce and Stefano Gabbana going their separate ways to head up direct competitor fashion brands. “The idea of hiring a woman is something I had in mind,” Toledano told the industry publication, alluding to the fact Dior’s top design role, which saw Yves Saint Laurent first rise to fame, has always been filled by men.

“I think there will be a clear evolution,” Toledano explained, drawing comparisons between Dior himself and his newest recruit. “She will bring her vision of modernity, her understanding of lifestyle.” Rihanna, a fan of Chiuri’s designs at Valentino, wears a gown by the house
Credit: Instagram @badgalriri The couple started working together at Fendi, then moved to Valentino, where they stayed 17 years and even shared the top job for eight
Credit: Getty Images

“It’s a great honour to be joining the house of Dior,” said Chiuri in a statement. “I measure the responsibility of being the first woman in charge of the creation in a house so deeply rooted in the pure expression of femininity… I cannot wait to express my vision.”

While she clearly has the full support of her new work family, the move will mean many a change for Chiuri, who is well-known for her boundless creativity, rule-breaking attitude and warm personality. She has worked for the past 17 years at the Rome-based Valentino headquarters, the latter eight as design co-director with her dear friend Piccioli, who now remains to lead in a solo capacity. (Before that, they worked together at Fendi and were part of the team that created what was arguably the world’s first modern It-bag, the Fendi Baguette.) The original It-bag, Fendi’s Baguette, which was co-created by Chiuri, had a whole episode dedicated to it on Sex & The City and is still a fave with celebrities like Olivia Palermo

Together they have created some of the most iconic accessories and capsule collections of the past decade – the rockstud shoe and bag, the Wonder Woman capsule, amongst many others – and scooped up a slew of awards in the process. Dior will mean a relocation to Paris so she can be hands-on in the brand’s stunning Avenue Montaigne headquarters, the same street where Dior himself once held his shows. Her first runway offering will be Dior’s Spring/Summer 2017 collection on September 30 in Paris. We wait with baited breath… Outside the Dior SS16 runway show in Paris last year, exactly one year before Chiuri’s debut for the house
Credit: Getty Images 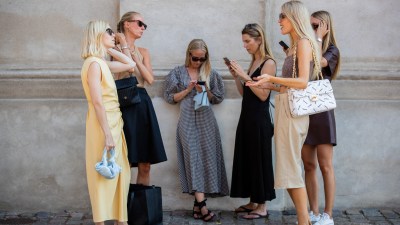