Christopher Esber occupies an enviable position in the Australian fashion industry: a hot designer whose flame never seems to dim. His namesake label celebrated its 10th-anniversary last year in discrete, pared-back fashion (though how else does one celebrate during a global pandemic?), a milestone that coincided with an explosion onto the international fashion scene. Zendaya, Dua Lipa, and TikTok sensation Addison Rae are among the A-list starlets to join Esber’s ever-growing gang of cool girls—while nods of approval from retailers like Net-a-Porter, MyTheresa, and Moda Operandi have cemented his status as a serious global player. 10 years are looking good on Christopher Esber.

For Resort 22—the runway show that closed Afterpay Australian Fashion Week for 2021—Esber bucked against tradition, switching out the usual retrospective anniversary collection for fresh, forward-looking clothes. It often feels like the last frontier of genuine subversion in fashion lies in doing less, not more, and if this is true then Esber’s Resort offering was truly subversive—a tight, 44-piece collection inspired by the Japanese notion of ‘Wabi Sabi’. Wabi Sabi is a philosophy that celebrates imperfection and impermanence, and its influence was seen throughout Resort 22.

The colour palette was cool and muted—mainly whites, creams, browns, and blacks—while the silhouettes riffed on Esber’s signature codes. Ruched silk dresses were fastened with dozens of delicate drawstrings, tailored trousers were worn low-rise and slouchy (all hail the return of Noughties gauche-chic), and slip dresses were overlaid with delicately embroidered silver netting. There were exaggerated cut-out details, of course, the presence of Shibori pleating, and the addition of thick rope detailing (reminiscent of the base of Bonsai trees) to fasten slinky summer dresses.

The whole collection—down to the staging, a kind of urban take on the Zen Garden—conveyed a designer perfectly at ease with his craft. Christopher Esber has spent a decade as the Australian fashion industry’s quiet achiever, creating clothes that, by his own telling, “whisper, rather than shout”. In-the-know fashion types were drawn to his clothing from day dot, and they haven’t strayed since. Even as legions of Hollywood stars and international supermodels flock to his signature brand of understated sex appeal, his vision has remained resolute and consistent. As far as finishing the first Australian Fashion Week since the Covid-19 pandemic on a high goes, this meditative ode to thoughtful, consistent design struck the perfect note. 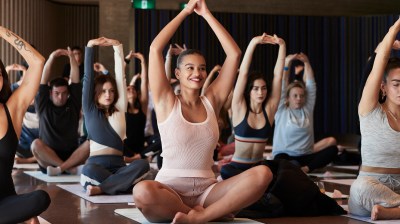 AAFW: The Upside’s Resort 2022 Collection Reflects On The Notion Of Togetherness