“Love can be a very messy thing. We don’t know that it’s all gonna be ok.”

HBO Max’s Love Life returns this week, but rather than continuing the story of romantically challenged Darby (Anna Kendrick), the new season follows an entirely new character. William Jackson Harper stars as Marcus, a 30-something editor who, at the start of the season, is married. But a chance encounter with the magnetic Mia (Jessica Williams) turns his life upside down.

Fans of the show’s first season know that Love Life tends to subvert traditional romantic comedy conventions, and Harper warns that a happy ending isn’t a guarantee for Marcus. “Love can be a very messy thing,” he tells GRAZIA. “We don’t know that it’s all gonna be ok.” Ahead of the season premiere, we joined Harper on Zoom to discuss his character’s turbulent love life.

You are an executive producer this season. How much input did you have in creating this character and his story?

A little bit. We definitely had a killer writers room and showrunners that sort of crafted a larger thing. I got to weigh in on certain little aspects, especially when it came to the [premiere]. What kind of person are we setting up for this entire journey? And what are we trying to say about certain things. And even in the second episode. It was nice to weigh in to some of that stuff before we got to set and before we had to make a quick change. Being able to be like, “This is something that’s sticking out to me. Can you explain to me why this is actually very important, or can we try something else that might be a little more truthful or say something that I’m more ok with saying?” It was great to be able to make those suggestions and have those conversations when people have the time to consider it and address it.

I think as the season went on though, once you lay that early groundwork, a lot of the stories just roll out on their own. The circumstances that you set up early on dictate how certain things go later on and it becomes a lot easier.

Were there specific things about dating and relationships that you wanted to or were particularly excited to explore?

If there’s anything that I really wanted to investigate… I was really interest in having the character not necessarily be a guy who got dumped and is feeling sad, but a person who kind of messed up their own life a little bit, in a way. Someone that has some responsibility in the state that they’re in. What is it when you are in a long-term relationship and it turns out that it’s not the thing that’s going to be the long-term relationship? What does that look like? I was also interested in it not being something where it’s like, we vilify the person in the relationship that leaves the central character. It’s not an easily, instantly legible thing that breaks them up. What is it when relationships sort of slowly die and really not one is the bad guy. It’s just it’s not right anymore. Those are the things I really latched onto. I wanted people to feel something for every character in the show.

So, what’s the status of Marcus’s love life when we meet him?

Marcus is a married man when we meet him. He’s got a good job, a stable relationship and he feels like he’s on-track. And things get thrown up in the air. I think he has kind of a moment when he realizes that… He’s kind of having to figure out what he wants again, at an age when I think it’s easy to judge people who don’t know what they want. It’s one thing when you’re in your 20s and the world is wide open and you’re a free agent for the first time. But once you’re in your 30s, there’s this idea that we should have landed on who we’re gonna be for the rest of our life by that time. Marcus is surprised by the fact that he’s not settled on who he is. That’s the heart of the story, a guy kind of putting together who he is again at an age when he feels like he should have already done that work.

Talk to me about his connection with Jessica Williams’s character Mia. What is it about her that captivates him?

I think that there’s just an instant ease between the two of them. I think that, on top of that… I don’t know. When we were shooting the scene where we meet each other, I was thinking, Man, if a woman who looked like this came up to me and just started talking and hanging out, with seemingly no other motive than conversation, and was really smart and funny and biting and sarcastic—It would shake me up a little bit! I think she’s just a magnetic presence. Yes, it’s the character. But it’s also Jessica Williams as a performer, as a person, is just someone who is incredibly magnetic. I think the audience just instantly is curious about her, and I think that Marcus does the same thing. He has an ease with her that he hasn’t had with a lot of people in a very, very long time.

Of course, Season 1 upended our expectations by having Darby not end up with Jin Ha’s character Augie. How does this season defy expectations about romantic relationships?

The stakes get very high in certain respects. And the problems that come up aren’t just misunderstandings. It’s not always light. There’s a lot in this season where there is no easy solution, there are no easy answers. That, for me, is something that’s really exciting, because you can still have the comedy there. It can still get, like, very darkly funny. And love can be a very messy thing. Dating can be a messy thing. I think it’s important to not know that it’s all going to be ok. And I think that’s something about this season. Like, we don’t know that it’s all gonna be ok. Often in rom-coms, we have a idea that it’s going to be fine in the end. And this takes you on a more circuitous journey.

Romantic comedies don’t often focus on men, let alone Black men. How does the simple fact that you are the protagonist impact what this story is going to be?

Well, yeah, I think it’s pretty rare to see a guy at the center of [a rom-com]. Look, I’ve always dated while Black, so those things are very much… That’s the only experience I know. Granted, Marcus’s experience is very different from mine. But the racial aspect is something that I don’t think about nearly as much as other people. For me, these things feel truthful and that’s really all there is to it. I think that, when it comes to subverting expectations, I think that’s really more in the narrative of the show and the fact that it’s a man at the center of it. There are rom-coms with Black men in them and are at the center of those stories. But I think this is a show that— I wonder if it’s because the previous season dealt with a white woman, it does in relief look like a very different kind of thing. Because these comedies do exist. The show is not going to stick with a similar demographic for every season. The show is going to change and ask different questions with different populations at different time. I think that’s the thing that’s sort of at the heart of it. And this is a world that is populated by all kinds of people, and that feels very much like New York. I think sometimes rom-coms can look very homogenous in a lot of ways, and our show very much does not do that. Those are the things that feel most salient to me about our show. It depicts a New York that I’m very familiar with, which is very diverse.

If Love Life were to get a third season, whose story would you like to see next?

What do you see as the project of Love Life? What is the series trying to tell us about modern relationships?

I think it’s a theme that ran through the first season and it’s running through this one as well: You gotta figure out who you are in order to invite other things into your life. And also, sometimes we need to kick certain things out in order to have other things come in. I feel like it’s largely about clarifying what you want and who you are, and then inviting the things that you want into your life once you’ve sort of laid that foundation, rather than looking for other people to define you or looking for other relationships to define you. Both seasons kind of dip into that for me, and I think that’s really interesting. 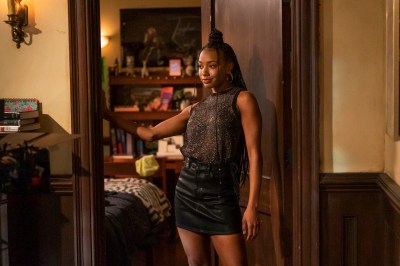