Fitness and wellness in post-COVID America is ready for a refresh, and Tracy Anderson is leading the charge.

Let’s get one thing straight: Tracy Anderson is never going to give you an Instagram squat challenge. She’s not going to share the secret to A-list abs in ten days. She’ll never lend her name to the latest detox gummy bear. What millions of fans have learned over the years, however, is that if you’re looking to forgo ephemeral trends for sustainable full-body transformation, then she’s got it — and all in a perfectly toned package.

Anderson, an innovator and pioneer of the fitness industry, has managed to survive, thrive, and emerge as an unparalleled thought leader over decades in the competitive fitness and wellness space. The secret to her staying power? Continual evolution and a commitment to techniques and products that actually work: whether it be her dance cardio programs, or exercise gear like bands, hand weights, and air hoops.

Anderson says that the diversity of her business empire has stemmed naturally from her mission to help people do more than just get better body parts. Instead, she’s trying to help them get better lives all around.

“For me, it’s about progress and me wanting to do all that I am capable of to help contribute to progress,” she tells GRAZIA Gazette: The Hamptons. “The human race needs a lot of progress, and I want to make sure that I do my part—so that my children and my children’s children have the opportunity to not get hip replacements when they’re 30; or to not have disconnected physical feelings; to be able to be and to become their most balanced self and to do it for the right reasons.”

In today’s world of social media “trainers” and celebrity-endorsed diets, that’s a perspective that is increasingly rare.

“Instead of making progress, most people just want to have a gimmick,” she says. “If they have a gimmick and they look relatively hot, or if they can buddy up to a celebrity, then that’s enough.”

Of course, many people know Anderson for her relationships with A-list clientele including Gwyneth Paltrow, Jennifer Lopez, and others. Still, Anderson has never been a “celebrity trainer” intent on hunting down fame. Instead, the quality of Anderson’s work is what has brought her fans and fame of her own. For her, the spotlight is a side effect of groundbreaking fitness work.

What if, however, people don’t want help transforming as much as they want an easy solution? It’s a problem that keeps Anderson up at night. “I struggle now more than ever with how to make a meaningful statement or connection in a world that seems to be more interested in superficial connections and quick fixes,” she admits. “All this research, all this strategy, it’s mind boggling to me when people will just be like, ‘Oh, but that’s too hard for me.’ Or ‘I’d rather have four-minute apps,’ or ‘I’m just going to hop on a bike and ride all day long because it’s easy for me.’ They don’t want to, you know, really be academic with their bodies.” So many people refuse to look below the surface.

While Americans have long been “sort of beauty-obsessed over health-obsessed,” though, that’s changing—and largely due to people like Anderson (not to mention the scars of COVID-19). From her revolutionary Tracy Anderson Method workouts to her eponymous magazine, Anderson has brought scientific data, expert perspectives, and creative energy to the world of fitness and wellness, even if some people know her mainly through her celebrity devotees.

“I’ve truly done and forged a life’s work that is really meaningful to the fitness industry,” she says, admitting, “I do believe that you can’t change a culture before it’s ready, and I think that that’s why—with all of my meaningful research and studies and work—I still got pushed into a superficial space where people wanted to call me a celebrity trainer over a pioneer. They wanted to know how to get Jennifer Lopez’s butt in three moves instead of how I could help them find their balance with all of my research.”

Most recently, that research has led Anderson to create what is perhaps her most ambitious and impressive undertaking yet: the Anderson Moto Air Pro Reformer. Set to launch at the East Hampton Studio this July, the full-body device is less an iteration of a Pilates reformer than a complete reimagination of how to approach strength work. “It’s always about doing the next thing that is right for the audience that I serve,” Anderson explains. “How do I show up for them in the most meaningful way? I can innovate. I can create all day. I’m a research junkie; I love to study, and I love to create. But I really love to make a difference in people’s lives more than all of that.”

“So, when I first designed my very first reformer, it wasn’t because I had some great love affair with Pilates or wanted to go into that space,” she says. “It was that the forces end up in muscles in different ways, and it was evident to me that weight resistance is very damaging to the joints. It’s not great for longevity, and it’s really, really difficult to design with dead weight.”

“The superficial powerhouse muscles love it, but the deeper layers don’t. It’s like trying to do an intricate painting with a big roller, right? The beauty can’t come out with the wrong tool. So the spring system that Joseph Pilates put into his reformer is brilliant, but I realized that if he was still alive, he would probably be continuing to innovate. What didn’t serve my purpose well, was that [a traditional reformer] only pulls from one point of resistance and I needed to customize for so many different people. So I invented a moving pulley system 20 years ago.”

From there, she made it even better. “We created an air resistance system, which will allow for incredible design with resistance, without damaging the joints and without damaging the muscle fibers in a way that will create more bulk,” she says. “I also can control the air for every specific person and purpose. I invented what I think is going to be the most important thing to everybody that’s aging in fitness. What everybody’s trying to go run to surgery for, I can do naturally.”

Anderson herself may be her very best advertisement. At 46 years old, she has the toned frame and natural glow of a teenager—even more impressive considering that she has a 23-year old son, Sam, and daughter Penelope, 9.

Some of Anderson’s happiest memories—with and without her children—come from time spent in the Hamptons, and this summer will surely be no different. “When I first went to the Hamptons, I was working with Gwyneth and she wanted me to come out with my family for a summer, like over 15 years ago,” she explains. “That summer, my son learned to surf and he loved it and he didn’t want to go back to Indiana where I lived. He was like, ‘I really want to stay here.’ We stayed and I raised my son there.”

“For me this summer is a big deal because I just bought a home there for the first time,” she reveals. “So even though I raised him there, I always rented. I never really committed.”

Anderson is now the proud owner of an historic 19th century home in Sag Harbor that once belonged to a whaling captain. Perhaps not coincidentally, the property is located nearly equidistant between her two Hamptons’ studios: Water Mill and East Hampton.

For Anderson, those locations are like home, too. “These are women and men that have been with me for, you know, 15 years,” she says. “These are people that have moved with me and achieved and accomplished with me for so many years.”

One thing is for sure: Anderson plans to keep moving and transforming people around the world—starting with herself. A practice of mindfulness and connectedness keeps her personal life and business empire grounded and operating from a position of strength.

“I don’t always do it perfectly,” she admits. “I’m doing better at it because we all have our things that we need to improve on. The thing for me that I needed to improve on the most was that I hold things inside that bother me. I don’t vocalize enough the things that upset me.”

With her business booming and family looking forward to a summer out East, there are fewer of those than ever. 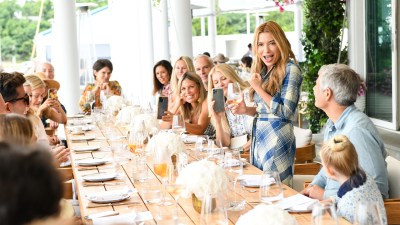 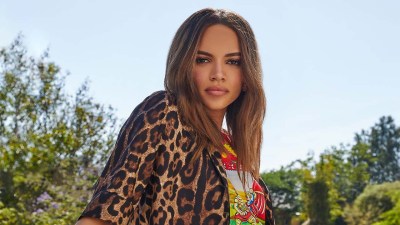 Such Great Heights: Leslie Grace and the Role of a Lifetime 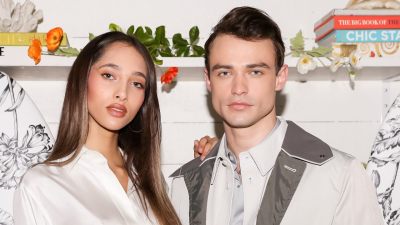 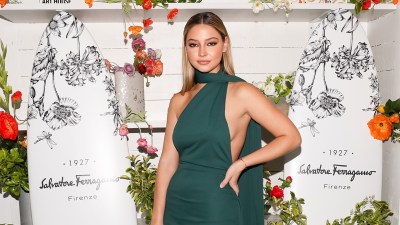 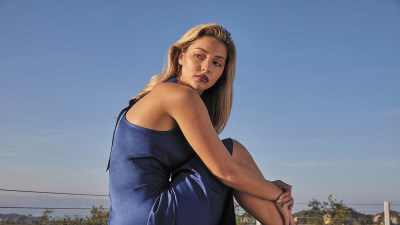 As Good As Gold

Fashion For A New Aje
Next page