Snap Happy In Southampton: Photographs by Christopher Makos and Paul Solberg on Display Out East

Christopher Makos, Paul Solberg, and The Hilton Brothers get picture-perfect.

The Hiltons are coming to the Hamptons! No, not those Hiltons. (Although, Paris and Nikki have been known to summer Out East.) In this case, the anticipated arrival refers to photographers Christopher Makos and Paul Solberg, who collaborate as “The Hilton Brothers”–named in tribute to two Siamese twins on the 1930s vaudeville circuit.

Starting July 10, their work will be on show at MM Fine Art in Southampton, with selections including Makos’ portraits of Andy Warhol (seen in our last Grazia Gazette!) as well as gorgeous water lilies shot by Solberg.

The overall vibe, says Solberg, will be very much of the moment: “We are projecting joy through our work. After the isolation of the last 15 months or so, this will be an expression of relief and celebration. It has never been a happier time in New York City and the Hamptons. We want to reflect that.”

In the aesthetic mix will be at least one example of the artists’ collaborative work. Aptly titled In Our Own Words, it is a unique photographic collage made from images snapped at locations around the world and credited to The Hilton Brothers. Solberg describes him and Makos as being “unconsciously attached.” Asked about their modus operandi for producing pieces in tandem, he says, “We pay attention. We stay open to interesting situations and things fall in front of us.”

Speaking of which, he and Makos first met while riding bikes in the West Village and their collaboration began instantly. That’s barely surprising, though, as both seem to attract kismet. Asked for an example of how things come together for him and Makos, Solberg replies, “We were flying to Vietnam once–pre pandemic, we spent five months out of the year traveling together–and met someone who owns a perfume business. The three of us decided we should do a perfume together. We spent six months making eight scents that were no-gender. Then we did eight photographs that went with them. You walked up to the photo and dipped paper swatches into the perfume. You got scents as well as visuals: the Acropolis, Greek mythology, flowers on marble.”

Makos, a peripatetic bon vivant who often has a camera in hand, is no stranger to interesting situations and intriguing people. Those facts are reflected in the images he will be showing under his own name at MM.  One coveted classic that will be displayed is a gelatin silver print he did of his longtime friend Warhol. The pop artist is depicted with different blond wigs in the piece, titled Andy Three Times, from the series Altered Image.

That is just a surface description of what Makos undertook with Warhol when they created the series, though. “It was a collaboration,” he says. “Andy and I wanted to collaborate on something and we were inspired by work that had been done by Man Ray and Marcel Duchamp: Man Ray photographed Marcel Duchamp in a woman’s wig and hat, posing as his female alter ego Rrose Sélavy. We liked the fact that what we were doing had an artistic antecedent.” It didn’t hurt that, as a young photographer, Makos put in a short apprenticeship with Man Ray.

Employing a total of five different wigs, during two studio sessions in June 1981, Makos shot 365 photos of Warhol. The piece at MM measures an enormous 40” x 91”. It comes from an edition of two artist’s proofs, one of which sold for $102,000 in 2018. Asked why these three shots (out of the 365) made the cut, Makos responds, “It’s all about the way Andy posed. It’s two different wigs and three different attitudes. It just made sense.”

Elsewhere in the show, a stunning blow-up of a Makos contact sheet shows just how fabulous life used to be for friends of Warhol. The images chronicle a lunch with the Rolling Stones. “It was a normal day at the Factory,” says Makos, referencing the piece Warhol Rolling Stones Lunch. He continues, “Having the Stones there was no big deal.”

The same cannot be said of the contact sheet, which not only preserves the meal but also shows viewers how Makos approached the artwork. “It has my original markings and first impressions; it’s sort of like hieroglyphics,” he continues, speaking of his grease-penciled notations that indicate which shots should be printed and how. “You look at it, read between the lines and wonder what Makos was thinking when he saw at it for the first time – and marked it up. I particularly like the shot where Andy is looking at me and smiling.” That’s made obvious by the fact that the image is quadruple circled in two different colors. “But you don’t need me to tell you about those photos,” he insists. “You just need to look at them.”

Same goes for his Portraits of an Era: a collection of 81 Polaroid shots that capture some of Makos’ favorite people. He casually ticks off Andy Warhol, Lou Reed, and Deborah Harry as ranking among them. “They are the epitome of cool,” he says of his happening friends. “I’m lucky to have led the life I lived.”

For Makos, revisiting those days is an emotional roller coaster—one that he thinks visitors to the show will enjoy.

“Sometimes I see dead people,” he says. “Other times I see amazing memories. I think people who visit the gallery will see a moment in history when America was so wild.”

As for Solberg’s solo images, they’re a world away—literally. His shots feature water lilies that he photographed in Vietnam. Four different images on display measure 44” x 62” each. He explains, “Instead of trees in your house, you can have my human-sized flowers!”

Solberg admits that he faced an intimidation factor while photographing this series of florae–“Everything has already been done with them”–so he kept things loose.

“It’s kind of like jazz,” he explains. “You relax, you improvise and you come up with something interesting. You forget what you’re doing and suddenly 10 hours have passed.” Working with a combination of natural illumination and small studio lights, Solberg found the graceful lilies to be perfect subjects. “I look for thin petals. I look for a euphoric sense where the light comes through and that makes for a more painterly effect.”

Overall, he says, it’s all about keeping an open mind and staying in the moment. “Chris and I share a philosophy: If we have not done something before, then, when the opportunity avails itself, the best thing is to just do it. Don’t ask any questions. It’s about trusting your nose and going wherever it takes you.” Let yours take you to MM Fine Art this summer. mmfineart.com 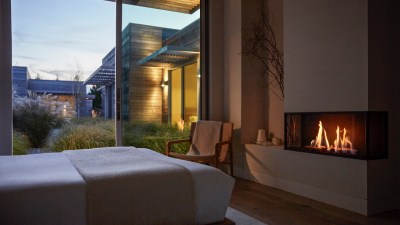