"To be a Nasty Gal, you've got to be nasty, edgy and funky fresh and hey — I'm all of those things"

“The cheek, the nerve, the gall, the audacity, and the gumption!” We can thank RuPaul’s Drag Race UK alum Tayce for that particular iconic saying. The 40-inch bundle wearing, long-legged, lip-synch assassin made quite a name for herself as not only the narrator — her confessionals were comedic gold, honestly —  but as the resident fashion model of season two of Rupaul Drag Race UK. Channeling the runway strut of queen Naomi Campbell, Tayce’ next venture is right in line with her drag character’s supermodel of the world persona: designing a fashion capsule line with a major high street retailer. That’s right, the Welsh supermodel has teamed up with Nasty Gal to present a 60-piece collection that’s giving us major 80s Glam Rock realness. Think Dynasty meets Def Leppard! The category is: Nasty.

GRAZIA had the chance to sit down and chat with the “absolute hound,” herself, all about her favorite iconic runway moments, her commitment to representing for fabulous Black queer boys, her now iconic catchphrases, and even got an extra special, sneak peek into her capsule collection with Nasty Gal ahead of its release today. `

GRAZIA: Among many other attributes, you’re a fashion queen, so this Nasty Gal collab only makes sense. Could you tell me how this collaboration came about?

Tayce: It was very organic. I literally was just sitting minding my business one day and they called up and asked me to do it and I was like, “Yes, 100%.” I just thought of how to kind of push the boundaries a little bit. I really wanted something that was for any gender. Anyone can wear it! It doesn’t matter what you look like it’s about what you feel and if you like something, you should be able to wear right? I think you know, it’s important to try and cross over those gender norms, gender boundaries that we’re all stuck in at the minute. Like, you see me within the campaign in this womenswear, white suit dressed as a guy— I just thought the juxtaposition of it all was brilliant. I’m really happy that I went with them on this.

Oh — (she swoons in excitement)! It would absolutely have to be the WASP-y era, like the 80s to early 90s Mugler. I’m talking wasp-y suits, a tiny, tiny little waist and the drama. I love the drama! I Loved the theater of it. How it was so much more than a fashion show — but a whole event. It was always a whole story, a whole play, a whole dance routine. It was glamour, babe. I love it. Definitely anything vintage Mugler.

What would young fashion enthusiast Tayce think about seeing you now living your posh supermodel dreams?

Oh my god!  I think he’d be very, very proud. When I was younger, everything I’m doing now is exactly what I wanted to do 100%, so it still is, you know, day in day out, kind of like a pinch me moment. Getting on Drag Race UK was one of the biggest moments of my life thus far and then to be doing this collection — wow! It’s a bit emotional because it’s like, you know, this is something I’ve worked so hard for my whole life. You know, to have my name in lights, be on a billboard, and be that b*tch. And now that I am, it’s kind of like, surreal. So yeah, I’m very proud of myself.

By doing this collaboration you’re representing the young little Black boys who get to see themselves—their fabulous, Black queer selves—live out loud.

Exactly! It’s amazing that there are kids just like me, you know, who can look to someone who looks like them because when I was younger I didn’t see myself represented a lot of places. There wasn’t this Black, queer, gay, Welsh kid out there doing these things. So, I’m really happy that they have something to look up to if they need it. Being able to provide that for them, makes me very, very happy darling.

Speaking of representation, on the show you and Asttina (fellow Rupaul Drag Race UK Season  Two cast-mate) spoke about Black representation — and the lack thereof — in the United Kingdom. What do you think is needed in the UK to help change this?

Honestly, I mean, Black people are out here doing it and sprinkling lots of Black magic every single day.  You know, we live in a world where we’re not put on an equal playing field as our white counterparts and it’s constantly a fight to have that kind of equality. We’ve (Black representation) always been there, we’ve been here doing these major things but aren’t given the spotlight and the recognition that we truly deserve. So I think as the years go on hopefully, I think it’s slowly getting better, but it’s still going to take some time.

What does drag mean to you?

Drag to me represents power, fearlessness, going out there and showing the world who I am. I’m doing what I’m doing because it makes me happy. Whether you dress up as a guy, as a girl or a cardboard box, if it brings you joy, and you know, brings some f*cking solace to your spirit — then that’s why you should do it. But, yeah drag to me means feeling, being and looking powerful AF and getting away with absolute murder!

One of your signature catch phrases that lives rent free in my mind is “Worried? Me? Never!” I say it all the time.

Where do you see the future of drag?

I see the future of drag everywhere. It’s become so mainstream now, more so than it was before. Here I am doing an edit with Nasty Gal, I mean if that isn’t progression for drag queens, I don’t know what is. I think it’s going to be all over the place, in fighting games, in wrestling rings—all over pavlova.

Take a look at more lookbook images from the capsule collection below: 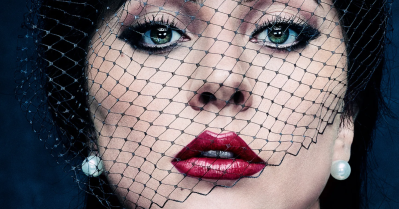