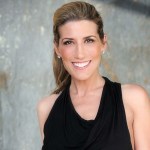 A distilled down guide to the storied spirit 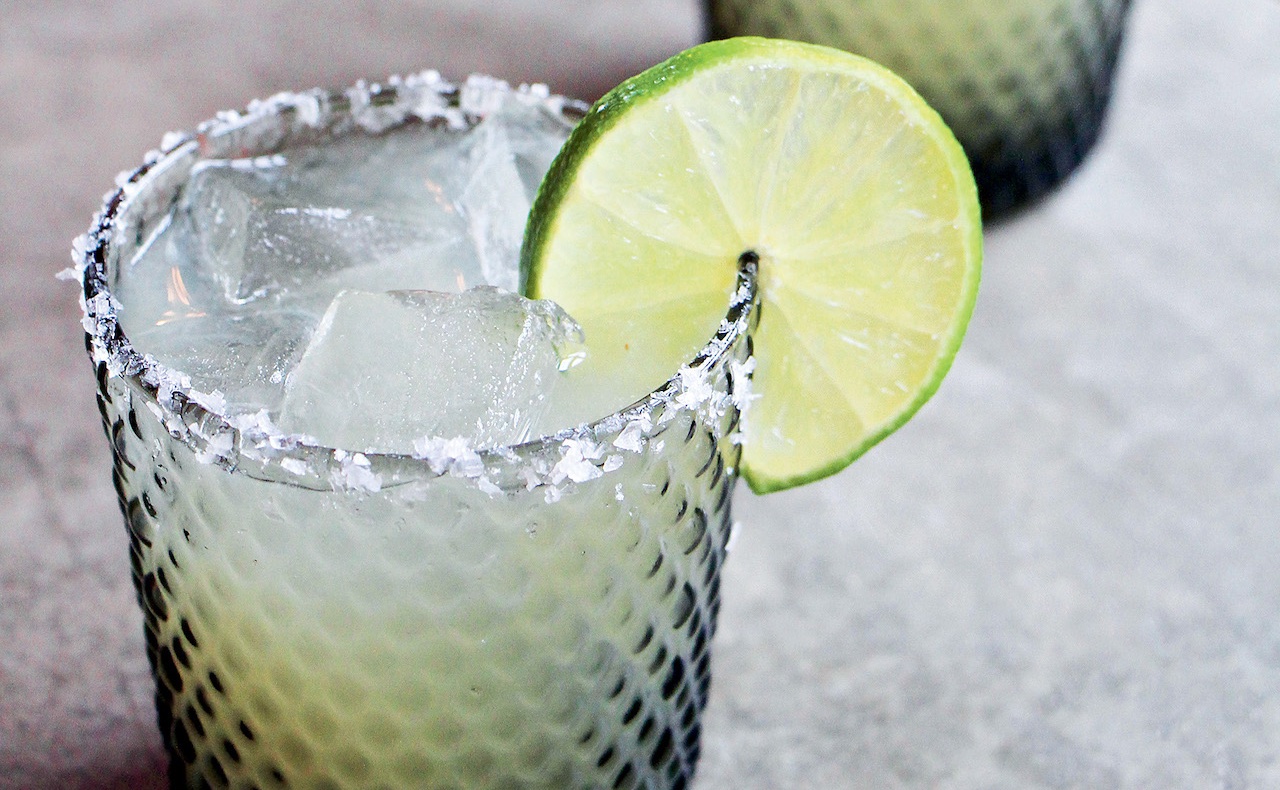 As a mezcal neophyte, I took this assignment and arrogantly assumed I’d be a mezcal master by happy hour. How hard could it be? I’ve tossed back plenty of tequila in my day and isn’t mezcal just smoky tequila? I was wrong and almost immediately upon heading down the mezcal trail, it became clear this was a complex spirit, so special in fact, one may go so far as to say it has a soul. The expression of this hand-crafted, artisanal spirit reflects its surroundings, much like a fine wine, being shaped by nature and reflecting these changes in every batch. I had loads to learn so I enlisted the assistance of mezcal expert Emma Janzen, author of the James Beard Foundation award nominated book: Mezcal: The History, Craft & Cocktails of the World’s Ultimate Artisanal Spirit to imbibe all I could about this sipper that is anything but one note.

“People like to call Mezcal the smoky cousin of tequila,” says Janzen, “but it’s much more complex than that.” Mezcal is a category of agave-based spirits under which tequila is encompassed in the same way bourbon fits into the broader whiskey family. Thus, all tequila is mezcal, but not all mezcal is tequila. Mezcal is also, technically, a denomination of origin (DO) that certifies mezcal production from nine Mexican states (Oaxaca, Durango, Zacatecas, San Luis Potosí, Guanajuato, Guerrero, Tamaulipas, Michoacán, and Puebla), of which most comes from Oaxaca. The DO certification for tequila on the other hand, requires it come from five Mexican states—the majority is made in Jalisco but can also be made in Guanajuato, Michoacán, Nayarit, and Tamaulipas. Mezcal-style spirits can be produced elsewhere, however they cannot legally be labeled Mezcal, the same way sparkling wine can only be labeled champagne if it is produced within the eponymous region of France.

With technical details out of the way, let’s move on to more important distinctions for us drinkers: the ones that affect taste. The ultimate expression of a mezcal will be influenced by three things: type of agave, its origin/region and the Mezcalero (mezcal maker) and their style of production. The agave varietal plays a pivotal role. Janzen explains that tequila is made from a single variety, agave tequilana weber blue, whereas “Mezcal is made from up to 50 different species of agave and countless subvarieties.” Each of these bring a different flavor profile to the finished product, much the way grape varietals do in wine-making. And to draw another comparison to wine, mezcal is terroir-driven and thus different regions and their microclimates affect the agave plant and will impart nuanced characteristics to the finished spirit.

Within the broad category of agave spirits, the basics of production are the same. The center core of the agave plant, or the piña, is harvested, chopped, then cooked to soften the fibers and convert the starches into sugar. For tequila, the piñas are cooked in above-ground, pressurized ovens, resulting in a crisper, sweeter final product. With mezcal, however, they are cooked in earthen pits lined with smoldering coals which provide its distinctive smokiness. The roasted piñas are then crushed, fermented and distilled to create the final spirit.

“The exact details of these steps (what kind of agave, what method to mash, what material the fermentation tanks and stills are made of) varies by producer and by regional traditions,” Janzen explains. Unlike many spirits, mezcal is generally not cut with water prior to bottling. And as a general rule mezcal is not aged, although it can be. Some argue that oak barrel aging can negatively impact the nuanced characteristics of a mezcal.  Aging Janzen explains, “is a more common practice in tequila.”

Additionally, there are production methods, defined by law and included on the label, that define the three categories of mezcal: Mezcal, artisanal and ancestral. “Mezcal” is the modern industrialized category of production. Artisanal comes from a specific region using specific artisanal processes, however, allows usage of stainless steel or copper stills for distillation. And lastly, ancestral, which utilizes strict methods of production utilizing entirely traditional processes such as pit oven roasting and fermentation in traditional materials such as clay pots. This diversity in production methods provides infinite variety.

“Because every producer has their own traditions,” Janzen says, “it is almost impossible to find two (good quality) mezcales that taste exactly the same.”

Mezcal is not meant to shoot, so resist the urge. Not only will you lose out on experiencing its unique complexities, but it will also knock you on your culo as most is bottled at cask strength resulting in a finished product between 80 and 100 proof. Like many purists, Janzen recommends sipping it at room temperature, straight up, and to allow its layers and essence to unfold.

“If I have a really nice, top-notch bottle that has a ton of character I am always going to sip that neat because I want to enjoy and celebrate all of the nuances of flavor that make it unique,” adding “I don’t want to mask those with other flavors that might take away from its soul.” For the uninitiated, however, starting with a cocktail utilizing mezcal may be the best first step. Its addition to a cocktail will add, “incredible complexity and often a deeply earthy quality,” Janzen tells Grazia. Whichever way you chose to approach it, you are setting out on a lifelong journey of discovery. “The diversity of flavor within the category is stunning,” enthuses Janzen. “You could spend the rest of your life tasting mezcal…and never feel satiated.”

Now let’s start sipping! “There is so much diversity in the category in terms of what varieties of agave are used and what traditional methods the producer chooses to follow,” says Janzen, “every bottle has a distinct personality.” And part of the fun is finding which one fits yours. “I am a firm believer that there is a type of mezcal for every kind of drinker,” asserts Janzen. To that end, she has provided her top three bottle picks as well as two cocktail recipes from her book to get you started:

NETA: The founders of NETA source extremely expressive batches of mezcal from producers working in the Oaxacan village of Miahuatlan. From the first sip of their espadín, I knew we’d see reliably amazing mezcal come from this portfolio, and I have not been disappointed. Batches range from in the dozens to hundreds, so they can be trickier to find on the market but are well worth the hunt.

Real Minero: I will drink literally anything from this family-owned company from Santa Catarina Minas in Oaxaca. With a family legacy that dates back to the 1800s, the regional tradition in the area is to distill in clay pots, lending a gorgeous mineral quality to the mezcal itself. It’s a true taste of heritage and tradition in every bottle.

Banhez Joven: For mixing in cocktails. It has a touch more complexity than your usual suspects. It’s a blend of Barril and Espadín agaves instead of 100% espadín, which is normally the varietal you will find at that more reasonable price point for mixing. Instead of having one singular family or mezcalero running the whole operation, the company follows a co-op model. So you’re getting this outstanding Mezcal at a super affordable price.

This intense, ancestral drink has cultivated a cult following in the spirit industry making its way onto top shelves everywhere and providing boundless inspiration for inventive cocktails across the world. Janzen shares two recipes from top mixologists as featured in her book Mezcal: The History, Craft & Cocktails of the World’s Ultimate Artisanal Spirit.

Simple, beautiful, timeless. Three ingredients. Mezcal. Lime. Agave. Whether you sip on the rocks, up, or frozen, the margarita is the perfect introduction to how seamlessly mezcal works in cocktails. I prefer to let tequila and mezcal share real estate in the glass for extra complexity, but there’s also something admirable about two solid ounces of mezcal. That’s the approach at Empellon, where the Mezcal Margarita has been on the menu since the taqueria first opened in New York City in 2011. Beverage director Noah Small took inspiration from the grandfather of all tequila cocktails —the margarita at Tommy’s in San Francisco — when coming up with the recipe. Effortless and refreshing. 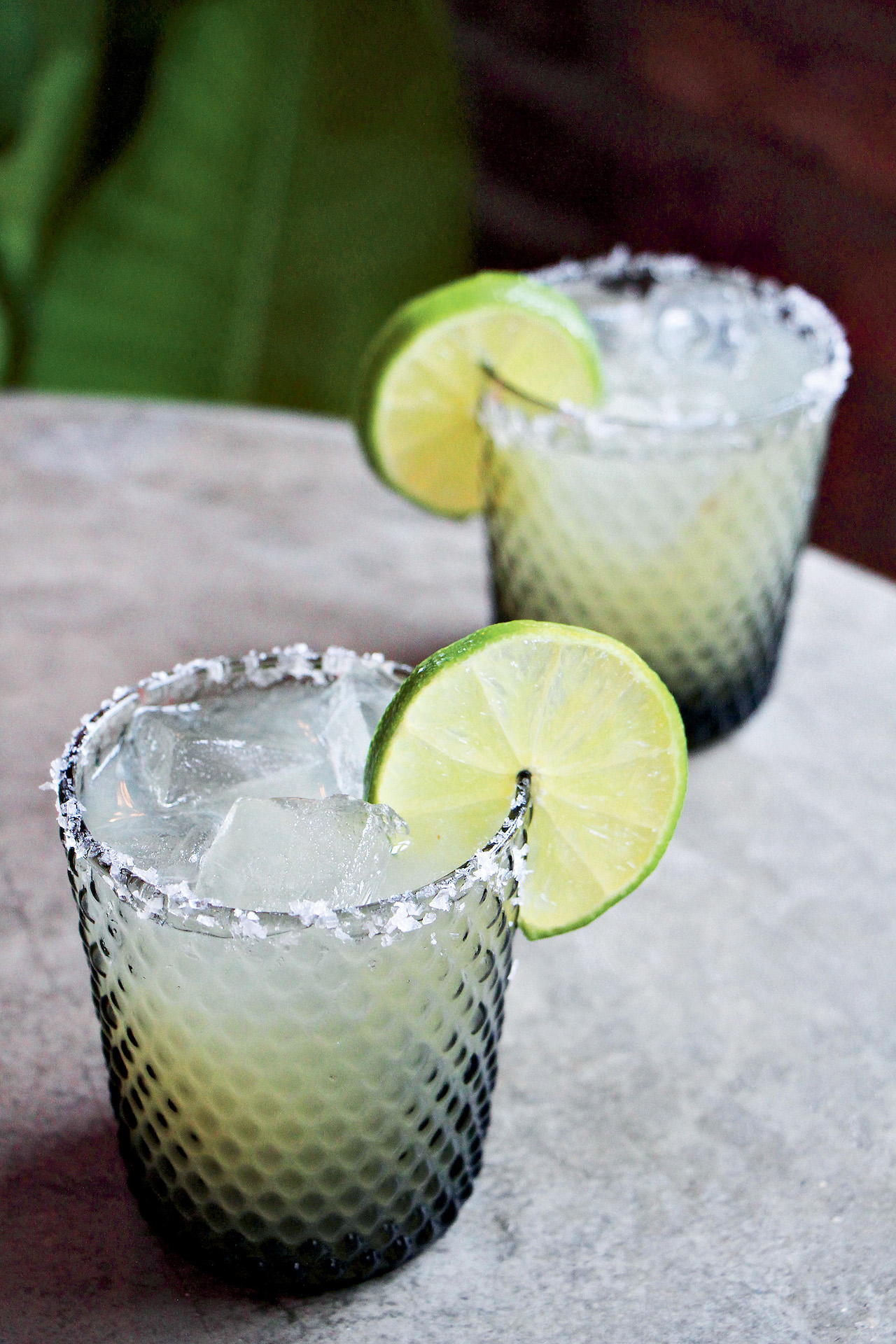 Rim a rocks glass with salt (Empellon uses smoked salt) and set aside.

Combine all ingredients in a shaker tin with ice. Shake until chilled and strain into the prepared rocks glass over fresh ice cubes.

*For the diluted agave syrup, combine one part light agave nectar with one

part hot water. Shake until both are combined. Let chill before using in a drink.

Store in the refrigerator.

A hyper-savory, stirred delight. Named after the historic aircraft carrier USS Intrepid docked in the Hudson River, Eryn Reece’s audacious take on the Manhattan is a brooding beauty. Spicy rye whiskey makes up most of the design, but mezcal sneaks in to contribute an underlying current of caramelized agave. Cynar brings an almost stalwart dryness to the glass. Boasting a perfect synthesis of bitter and sweet, it’s a memorable drink worthy of legendary nightcap status. 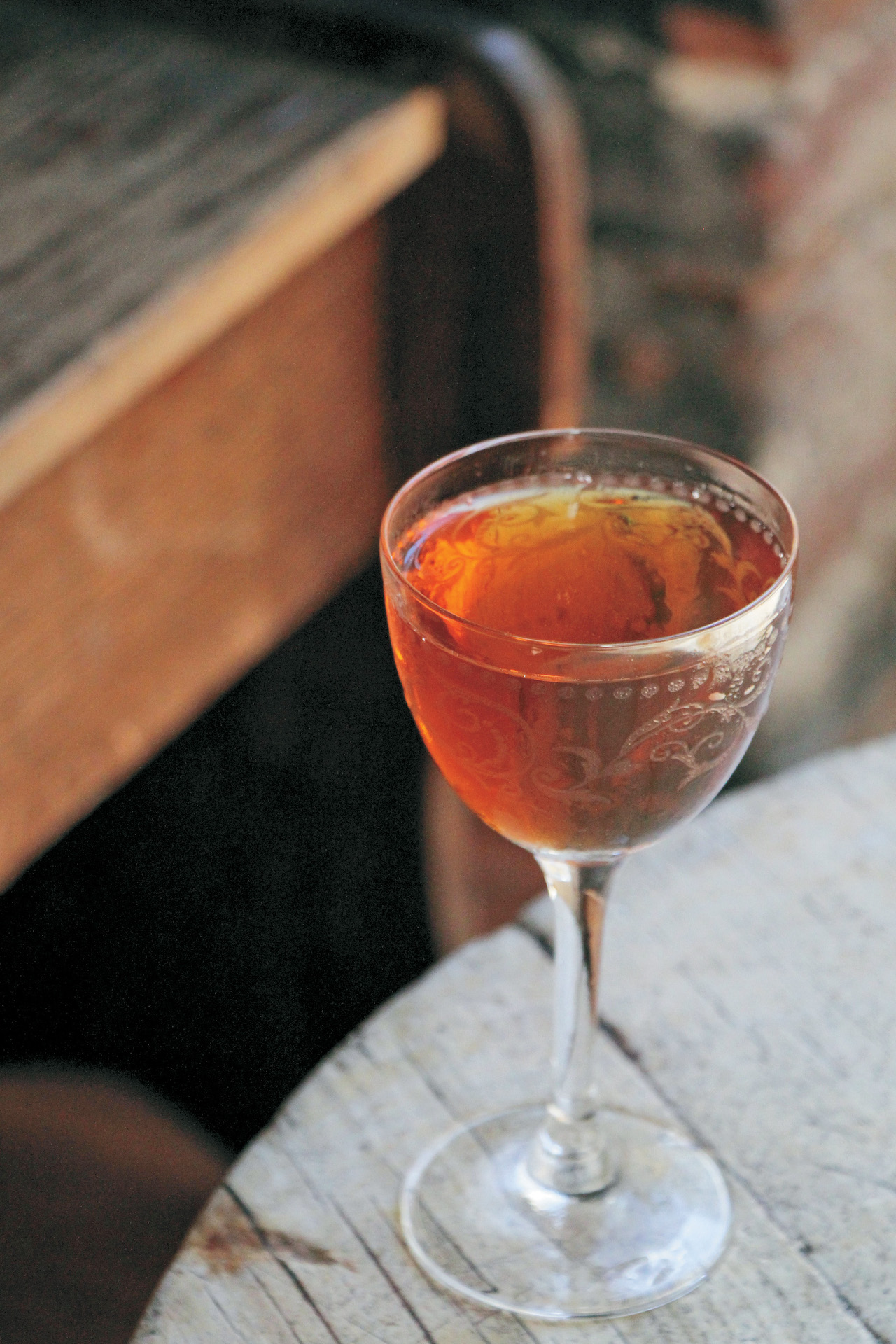 Combine ingredients in a mixing glass with ice. Stir until chilled.

Strain into a Nick and Nora glass. No garnish. 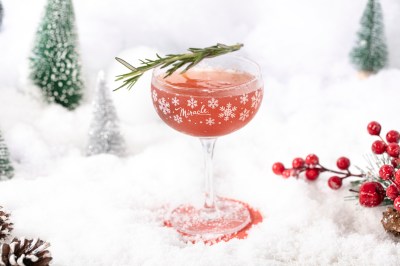 Meet the Christmapolitan, a Festive Seasonal Update of the Classic Cosmo 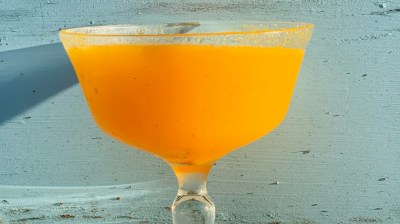 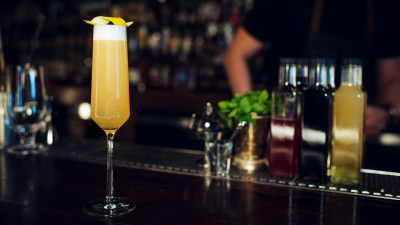 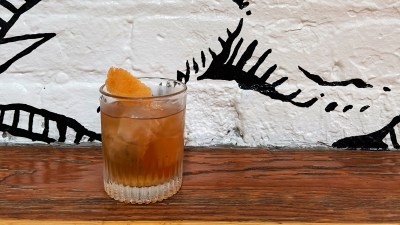 Mezcal Cocktails to Reawaken the Spirits 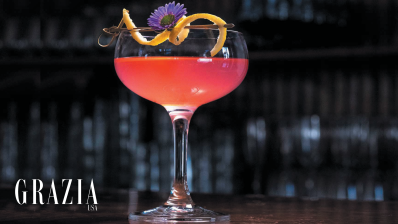 Patience Is A Virtue, A Cocktail Recipe By Chef Erick Williams 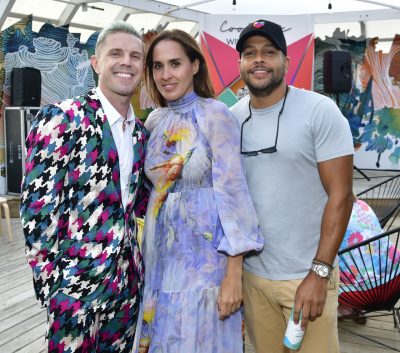