Attending the Jean Paul Gaultier runway show, the two ladies met up with their ‘Emily in Paris’ co-star Lucien Laviscount

Emily in Paris stars Ashley Park, Camille Razat, and Lucien Laviscount have officially set upon Paris Haute Couture Week, sans the titular Emily Cooper (Lily Collins). In town and filming for the forthcoming season 3 of the Netflix hit series, the cast had a few hours of free time after wrapping a shoot at 4 a.m., according to WWD.

Razat has been making herself a Paris Haute Couture Week regular, attending the shows at Armani Privé, Celine, and now Jean Paul Gaultier. Opting for a navy pinstripe deconstructed suit-dress on top of JPG’s signature tattoo bodysuit, Razat completed her look with a pair of knee-high patent leather pearl-studded boots. With her blonde hair slicked down and straightened, she adorned red eyeshadow splashed across the corners of her eyes.

The French actress was spotted outside of the runway venue alongside British costar Laviscount, and she sat next to castmate Park during the presentation.

Seen with quite the cut on his forehead, Laviscount was sporting a war-wound from a run-in with an electric scooter on his morning run. Opting for ivory trousers and black Chelsea boots, Laviscount wore a bright red Hawaiian floral-printed shirt, left half unbuttoned. Layering his accessories, the actor sported chain bracelets of silver and gold, while packing on the necklaces of crosses and skulls.

Playing a romantic option for Emily in the series, Laviscount portrays Alfie, the U.K. transplant she meets in her French class. Caught in a love triangle between Emily and Gabriel, we’ll have to wait and see how things play out in season 3.

Staying in the City of Light until the end of September, the actor told WWD, “Since I landed in Paris for the first time last year, my feet haven’t touched the ground. Literally this whole place is a museum with the roof taken off, like I’m living in a magical world and I don’t want the dream to stop.” With the series having been renewed for both seasons 3 and 4, the dream won’t be stopping anytime soon.

Also in attendance was Mr. Malcolm’s List actress Ashley Park, who plays Mindy Chen in Emily in Paris, who sported an adorned a hooded vintage Gaultier velvet black gown with a shimmering studded bust for the occasion.

“I’ve become a lot more bold and elevated in my choices because of the show,” she said, referencing her eclectic Patricia Field-curated wardrobe. “This was love at first sight. I’ve never had something like this happen. It’s the first one I saw and it was ‘Let’s try this one first,’ and it fit like a glove,” she recalled. “It was destiny.”

Attending as a guest of the designer, Park sat front row alongside Razat and Heart Evangelista while Laviscount was photographed next to models Coco Rocha, Alessandra Ambrosio, and Jourdan Dunn.

As we count down the days for the next season of Emily in Paris to appear on Netflix, at least we have these superb fashion moments to hold us over until then. 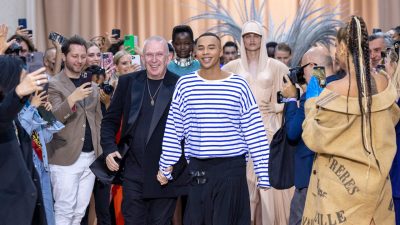 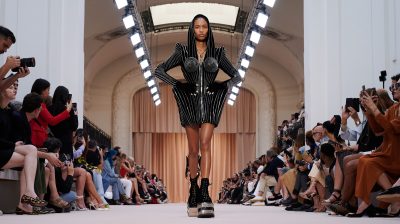 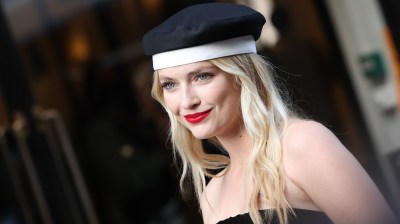 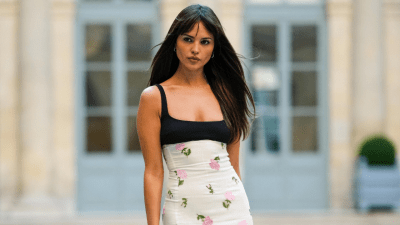 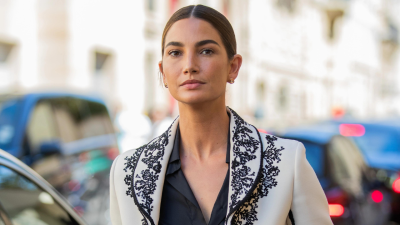 Baring It All: Lily Aldridge Stepped Away from Her Signature Beauty Look at Dior
Next page