On The Campaign Trail: How The Fashions Of Five First Ladies Compare

Each FLOTUS has her own sense of style.

Throughout American history, the First Lady serves an important role as a surrogate on the campaign trail during a presidential election year. She is often deployed to help engage their supporters, spread their husband’s message, and often bring a softer side to a contentious race. Campaigns also serve as an unofficial real-life runway opportunity for FLOTUS to flaunt her style. While fashion may sound frivolous when real issues are on the ballot, a First Lady’s favorability, and ultimately a candidate’s, can certainly be influenced by style. 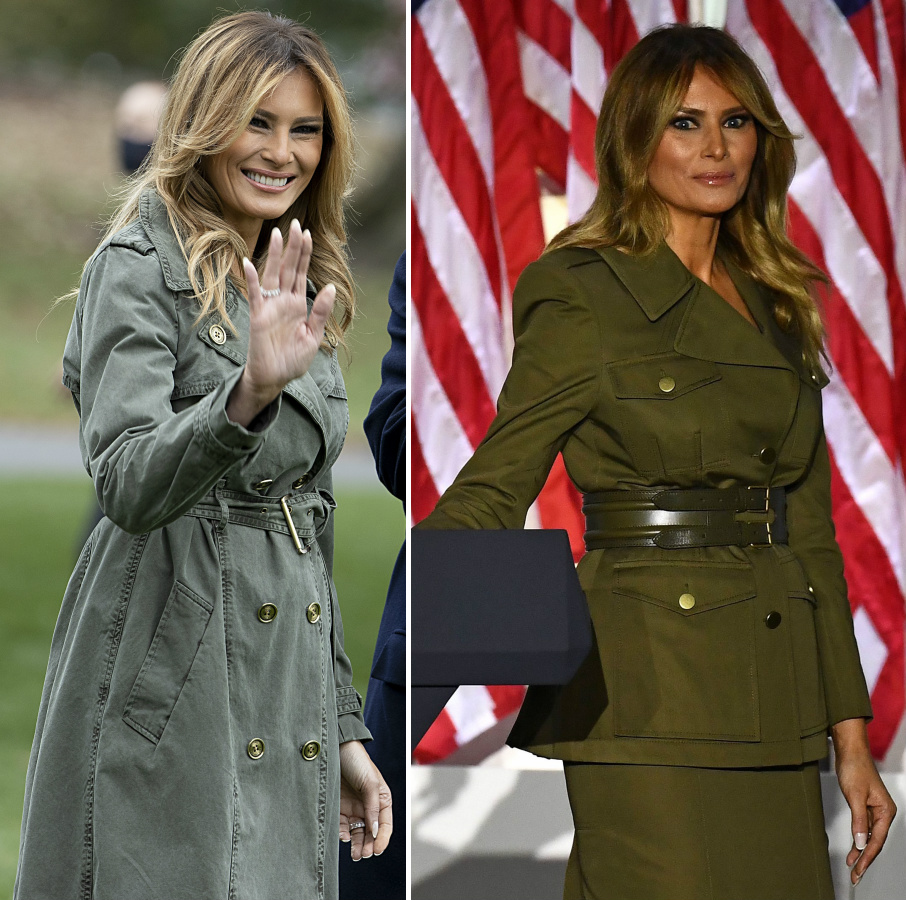 This year, Melania Trump has largely remained quiet on the sidelines. After battling COVID-19 just a few weeks ago, she finally made her first solo campaign stop of the year on October 27 to support her husband, President Donald Trump. Leading a rally in Pennsylvania, the often out of the spotlight First Lady and former model arrived wearing $250 green khaki double-breasted trenchcoat by Michael Kors, featuring a relaxed fit and gold buttons.

The style was similar to the military khaki green Alexander McQueen ensemble she wore while addressing the Republican National Convention from the Rose Garden at the White House back in August. That look, which included a peplum jacket, pencil skirt, and cinched waist belt, drew quick and harsh comparisons to uniforms worn by a number of fascist and dictatorship leaders, including Stalin, Mussolini, and even Kim Jong-un. 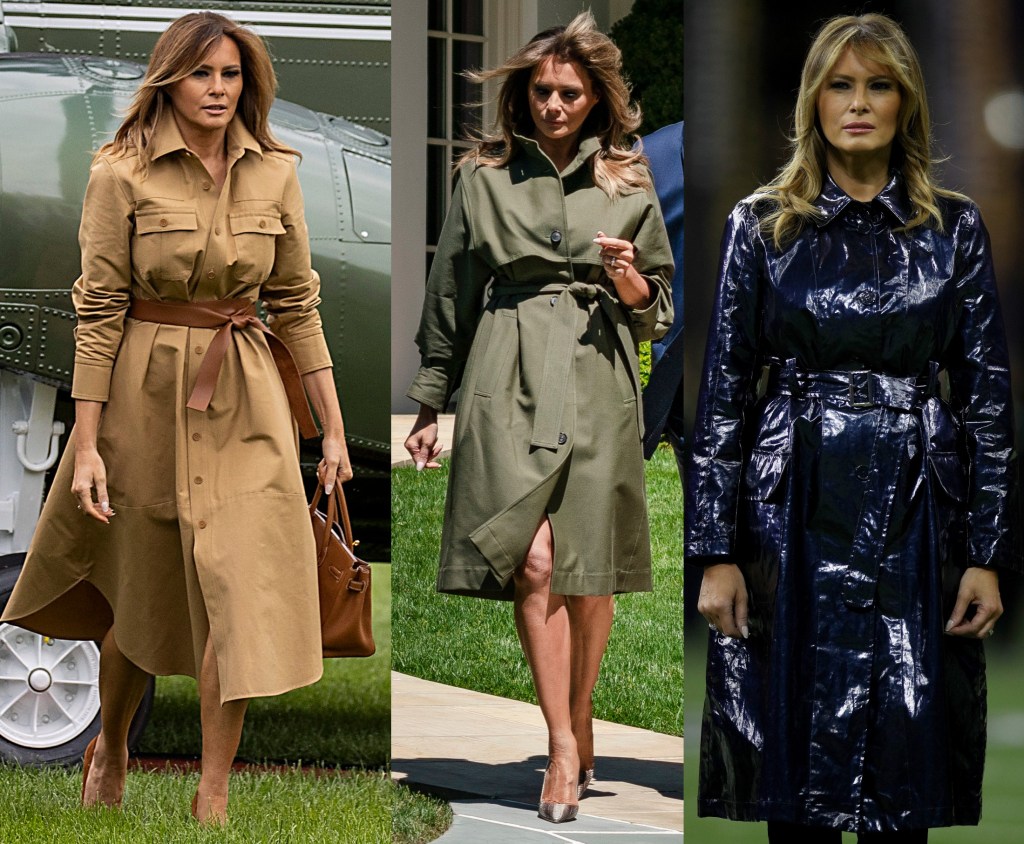 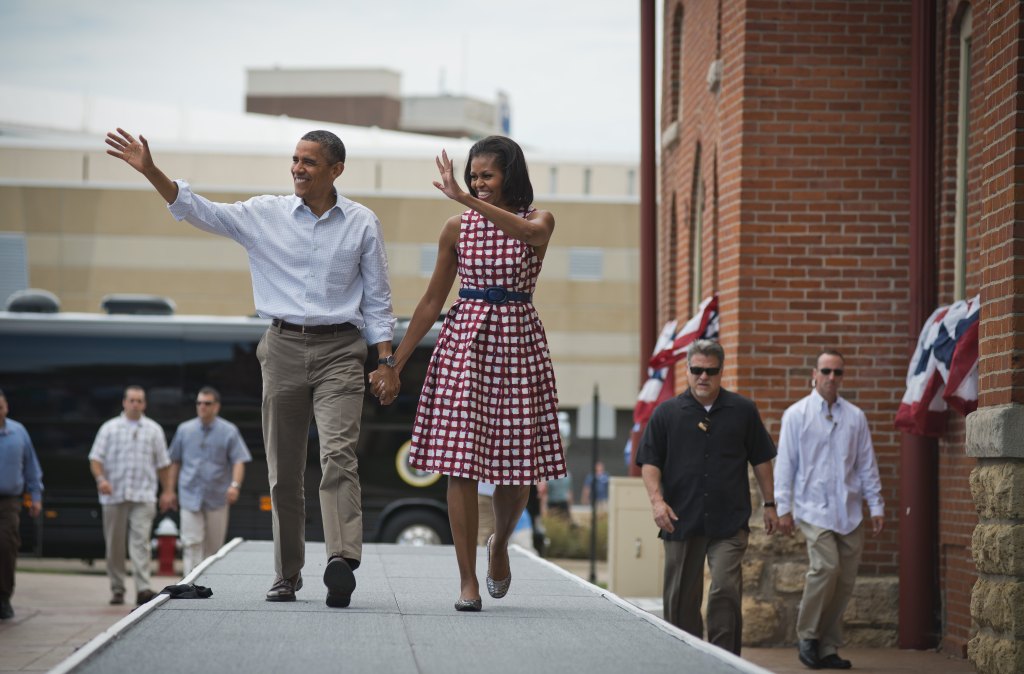 Michelle Obama played a pivotal role in both of her husband’s successful presidential campaigns. Standing at almost six feet tall in heels, the first black First Lady continually commanded attention yet remained relatable thanks to her effortless sense of style and niche for mixing high-low styles. She’s known for loving bold prints, vibrant colors, and, of course, showing off her enviably athletic arms in her signature sleeveless dresses. As the sitting First Lady in 2012, she helped Barack Obama campaign for reelection and solidified her style icon status. One of her standout looks came at an event in Iowa when she donned a 50s style chic checkered ASOS dress and ballerina flats. 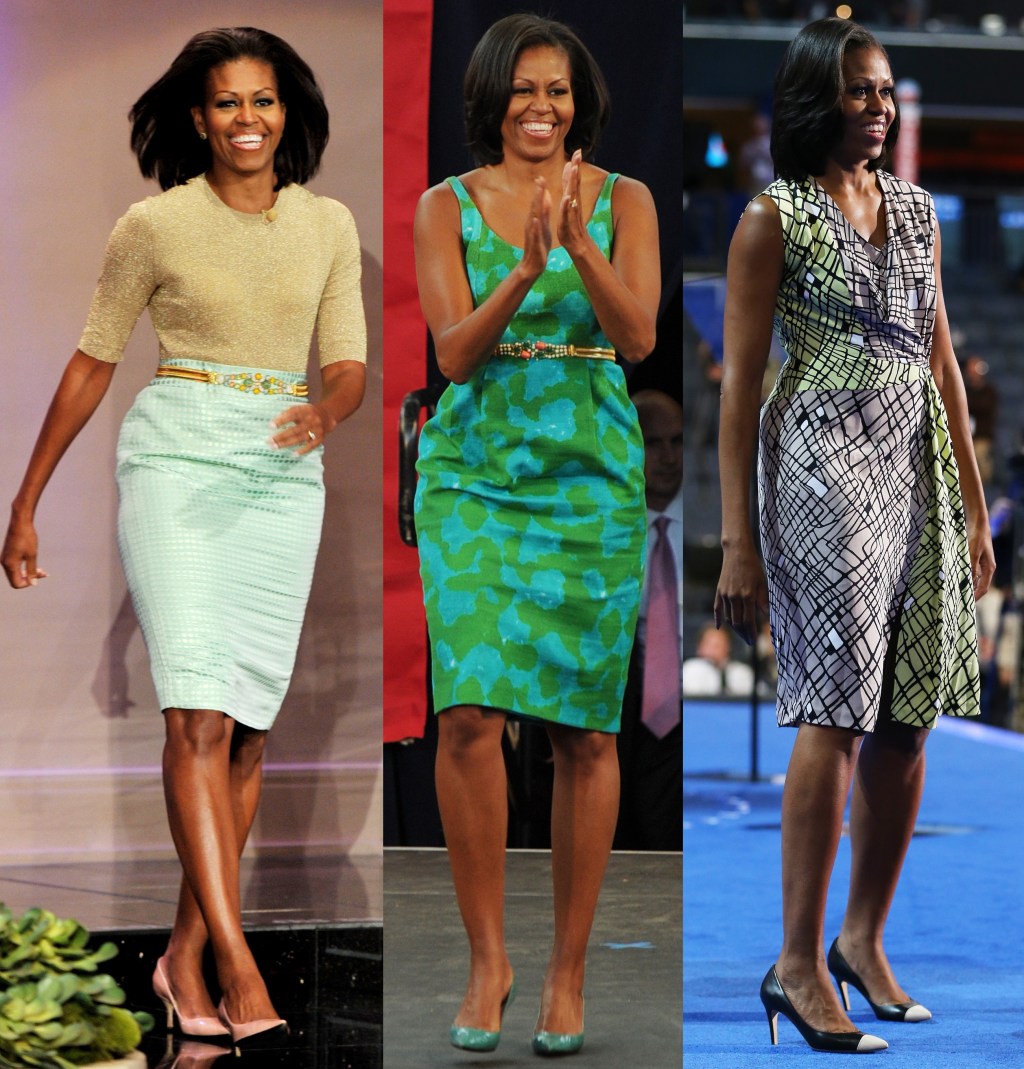 Other 2012 campaign trail fashion highlights included her metallic top and J. Crew pencil skirt combo, which she styled with a vintage House of Lavande belt and pink pumps on The Tonight Show, her bold Chris Benz dressed styled with the same belt she wore in Florida, and the DVF wrap dress she rocked at the DNC in North Carolina. 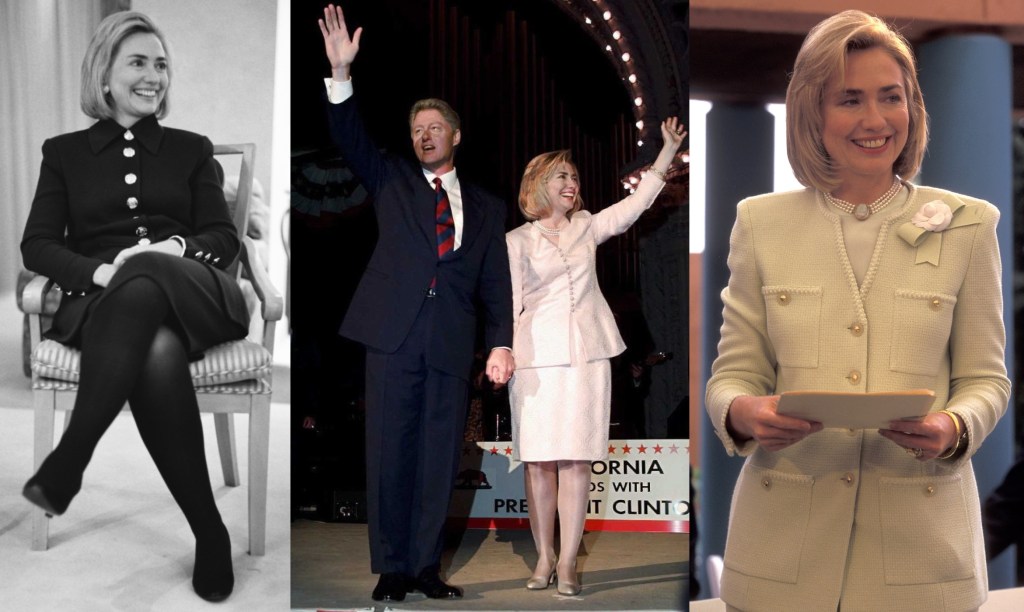 Before becoming the first woman to win the popular vote in an American presidential election, but ultimately losing electorally to Donald Trump, Hilary Clinton supported her husband, Bill Clinton, as First Lady from 1993 to 2003. As a hardworking, hands-on FLOTUS, who was tenacious in child and family advocacy, she was hardly just her husband’s arm candy on the campaign trail. Her no-frills style reflected that all-business attitude and strength. Before she was famous for her presidential pantsuits, FLOTUS skirt suits dominated her closet.

As an actress and then a two-term First Lady, Nancy Reagan knew the importance of putting her best self forward. She was known for her love of luxury fashion designers, including James Galanos, Bill Blass, and Oscar de la Renta. She turned heads with her $25,000 inaugural wardrobe in 1981 (including her $10,000 white, hand-beaded, one-shoulder Galanos inaugural gown).

“I don’t think there’s been anyone in the White House since Jacqueline Kennedy Onassis who has her flair,” Blass even once said.

When it came to her husband’s reelection campaign in 1984, Reagan kept up her signature glam style. She favored the color red, calling it “a picker-upper.” Her wardrobe included red so often that the fire-engine shade became known as “Reagan Red.” Signature pieces in her wardrobe included tweed skirt suits, pussy-bow silk blouses, and statement necklaces. She also employed two private hairdressers, who would style her hair regularly in the White House.

After leaving the White House, Reagan was honored at the 1989 annual gala awards dinner of the Council of Fashion Designers of America. She received the council’s lifetime achievement award. Barbara Walters said of her, “She has served every day for eight long years the word ‘style.'”

With impeccable taste and natural grace, Jacqueline Kennedy is arguably the best dressed FLOTUS of all time, although she never officially campaigned when husband John Kennedy ran for his ill-fated first term in 1960.

Early that year, Kennedy discovered that she was pregnant, and due to difficulties in the past, her doctor recommended that she take it easy. Although she did not accompany JFK on campaign stops around the country, she supported her husband’s campaign in other ways. She did cover stories for magazines in the months leading up to the election, and in October 1960, she sat down for several television spots and commercials. She even recorded the first American presidential campaign commercial in the Spanish language. She also wrote a weekly syndicated column, “Campaign Wife,” that ran weekly in newspapers across the country.

Using personal stories and her perspective on campaign issues, Kennedy wrote primarily for an audience of women interested in her role as the candidate’s wife. She addressed a wide variety of topics, including writing about her interest in education as a campaign issue, responding to remarks about her appearance, and encouraging voters to “Call for Kennedy” and arrange debate-watching parties. In the work-from-home equivalent scenario, Kennedy never let her style suffer. Favoring designer Oleg Cassini, Kennedy was known for her A-line shift dresses, boxy jackets, trapeze coats, and polished skirt suits. 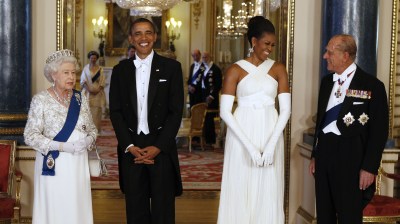 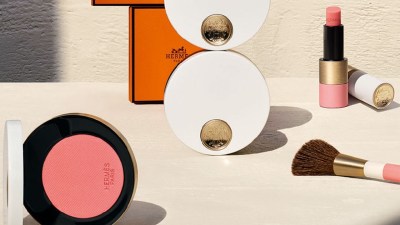