A very unscientific survey about the controversial rapper

Azealia Banks is attempting a comeback. Or, depending on who you ask, maybe she’s just doing what artists do: releasing new music, playing shows, doing some press. Also, this year marks the 10th anniversary of her breakthrough single, “212,” so there’s that. But because it’s Azealia Banks—a performer known as much for her Twitter feuds, offensive comments, erratic behavior and mental health struggles as she is for her music—it feels like a comeback. Or maybe it just feels like a comeback is necessary.

The gays in particular seem to be living for Banks’ current moment. Which is odd given her complicated relationship to the LGBTQ+ community. Banks identifies as bisexual and has aligned herself with the ballroom community. She’s also notorious for lobbing antigay slurs and transphobic rhetoric at people with whom she’s feuded. And as recently as this February of this year, she compared gender confirmation surgery to castration in an Instagram comment. In June, just as Pride month was ending, she posted a video message on Instagram in which she tearfully thanked her LGBTQ fans for all the love and support they’ve shown her over the years, tacking on an “I’m sorry” at the end—though she didn’t specify what she was sorry for or why.

Then, last week, the organizers of Brooklyn’s Bushwig announced that Banks would be performing Saturday night for the influential drag festival’s 10th anniversary—the same week that she targeted Kim Petras with transphobic and fatphobic comments on Instagram. Notably, Bushwig was founded and continues to be run by trans and Latinx performers. With no major backlash to the news—Drag Race alum Jiggly Caliente was the only notable performer to drop out—I decided to find out what Bushwig attendees had to say about Banks and her comeback.

Can you explain the Azealia Banks comeback to me?

Iodine Quartz, 24
I don’t think there’s a comeback, because in my opinion she never left. I have a very strong opinion about Azealia Banks and it’s entirely positive and supportive, due to her mental health journey—that a lot of us are going through anyway. Anyone who has more money than us, celebrities, are not subtracted from the same sort of grace and compassion. And I also think it’s very interesting that a lot of non-people of color within the queer community are so eager to cancel her but will also listen to Donda. It’s misogyny and combined racism for me.

Yaga Tigerlily, 23
Azealia Banks was always there. We refused to acknowledge her  because she said things that hurt people’s feelings. Celebrities do a lot of problematic sh*t and we’re able to forgive them, then we should be able to work on that however we feel is appropriate. She’s putting out great content, and I’m willing to accept what she has to offer to the queer community.

Pansy, 30
It’s not a comeback. She never went anywhere. I dunno. She’s not wrong in saying what she says about the white cis gay community. She’s just a compete b*tch about it, which I love her for. She clearly suffers from mental health struggles, so I don’t hold any of her negative comments against her, because I don’t feel like they come from a place of being, like, meant.

Ok, but I feel like I’m not hearing anything about the things she’s said about trans people.

Iodine Quartz: Her specific comments on Instagram about my trans brothers and sisters and thems—that for me was my cutoff at one point in time. That was when I had to unfollow her and stop listening to her music. That was my ultimate disagreement with her—I don’t want to say her beliefs, because she recently negated that. But that was my disconnect with how she operates. It was a moment of…needing to reflect on my own alliance. And also I reflected on how society views these people who have more money than us and are also celebrities and pop stars. There needs to be a divide between loving the art and loving the artist. At the end of the day we are all people and we have all said some horrible sh*t. Everyone’s trauma is their own. I personally don’t forgive Azealia for what she said about the trans community, as well as, like, trying to blend it into Judaism. I didn’t like that at all. That was very antisemitic. But also, even in having friends who have the same illness that she has, with them, I have to take everything they say with a grain of salt. Because I know there are these moments where they’re not themselves. They’re supercharged. They act out of irrational behavior.

Avery Badgirl, 25, they/she
Honestly, she’s always had bops and she’s always been problematic, and I feel like my view of her as a person hasn’t changed. My view of her music has also stayed pretty similar. I do really love her music and I do think that she—all of her personal statements are concerning. I frankly don’t understand how someone can say the things that she says. As far as a “comeback,” I don’t see her differently than I ever have. I haven’t forgotten the transphobia or any of that.

Ruby Tuesday, 24, he/they (out of drag), she/her (in drag)
I’m excited to see her tonight, because I love her music. I don’t know if she should be playing Bushwig. I don’t agree with her transphobic comments. However, I do love a problematic queen. And I do think that art in general is probably going to be problematic to somebody. I don’t like that hers is problematic to trans people. But I loved her un-cancelling herself! Because that was iconic! And, like, of course, she’s a Black woman so she gets canceled, but all these white men aren’t canceled, and they’re still getting to act or sing or whatever. And I also believe you should be able to separate the art from the artist. I really don’t like when people are like, You shouldn’t listen to that! I’m like, I don’t care what she does. I like her music. I don’t want to give her my money necessarily. But…yeah.

Phoebe Bingbong, 25, she/her
I also like Azealia Banks’s music. She puts out a lot of bops. But I think that [Bushwig] is not a space where we should be inviting that kind of an energy. This is an LGBTQ friendly place and that includes trans people. That includes gay people. She’s said stuff about multiple facets of the LGBTQ community, and I think that we should hold that kind of an artist accountable. If you’re gonna say this stuff about our community, you shouldn’t be invited into our community to then perform for us. But I also agree with the fact that it’s the art vs. the artist. I still listen to [Azealia Banks’s] music. I don’t personally purchase it, but I do enjoy the music, so I keep listening.

Danilda Estévez, 34, she/her
I am surprised that people haven’t reached their breaking point with her, that people are still willing to… We have this expression in the Dominican Republic: hacerle coro. It doesn’t have a literal translation, but it means when people are still vibing with you, when you’ve done a lot, but we still vibe with you. The thing is, I’m actually grateful that she’s still being given the opportunity to make her art. Because, as controversial as she is as a person, I think that what she creates has value. And if we are going to accept Kanye with all his madness, why not give Azealia the chance to make her stuff and share it with the world. I do think that she needs to find some light within herself. She may have some conflicts that she needs to deal with, and if she found that clarity I think her art would be better, maybe she wouldn’t find herself in antagonistic positions with so many people. But I try to accept her as she is. I love her music. I find her entertaining. I have a thing for problematic people!

As for the comeback… I cannot really explain it. One theory is simply that society is more open to listening to women. If you think about it, 10 years ago she would have been completely destroyed by the industry by this point. You know how the industry ganged up on people. Canceling celenbrities is something that happened repeatedly to women!

Will, 32, cis male
She is, for all intents and purposes, a terrible person. She called Zayn Malik a sand n*****! She has said some really bad sh*t. I will say, one thing that gays are pretty terrible at: they’re pretty [willing] to let things go if someone’s going to release a bop, right? And she released several bops. So, I unfollowed her on Instagram. I was over it. And then she came out with this massive apology to the gays. And I was like, Sure, that doesn’t make everything better, but I was still listening to her music anyway, so now I feel a little bit more…

So, you feel good about the “apology”?

Will: I think the apology is at least there. At least she’ acknowledging it. I don’t think it’s enough, and I don’t think anyone’s ever gonna say that Azealia Banks is the big LGBT queen. I saw this tweet that she put out about Kim Petras the other day, and I was just like, Come on! We accepted your shitty apology, so why do you keep going in on this? And that did bother me. She’s a Black woman, so maybe we’re giving her a little more room than if she was a white man, for sure. But…yeah, I like her songs.

Nick, 27, cis male
I am fairly out of the loop with all of her recent statements.

She compared gender confirmation surgery to castration in February of this year.

Nick: Yeah, that’s not cool at all. That all being said, acknowledging that I’m not the most in-tune with the exact details, I also remember parts of her Twitter rants where she was saying she was suicidal. And I think that my position on it is that if she is eventually willing to own up to problematic behavior and show that that awareness is causing her to stop, I would be willing to embrace her again. I personally still have a problem with her. I think I’m looking at it with the view of mental health: Is this her literally having an inability to control her thoughts? If that’s the case, maybe she should take the steps to censor herself in a way that’s not going to bring other people down or make them feel worse about themselves. Of course, I like a few of her songs. I am not really willing to support her as an artist—but I’m also not going to not come to an event that I love just because she’s performing. I see the harm in some types of cancel culture. In her case, I think that cancel culture could be appropriate. It’s a grey area for me.

Heléne Yorke On Cosplaying Adulthood in ‘The Other Two’ 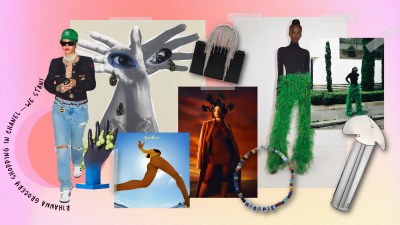 A Moodboard: Some Of the Things I’m Obsessed With This Week
Next page