"A metaphor for interconnection and for community between people, between us all." says creative director Sarah Burton The last time Alexander McQueen staged a runway show in New York City, the London-based label arrived right in the middle of a hurricane and flooded streets in the fall of 1999 to debut their “Eye” collection. It only took 23 years for the brand to cross the pond again (after a hurricane, can we blame them?) to unveil their Fall-Winter 2022 line-up, and this time, sunny spring-like temps greeted the team.

Ahead of the show, staged at the Brooklyn Navy Yards on Tuesday evening, the brand teased the theme with images of mushrooms shared to their Instagram page. Sure enough, the earthy cues continued at the Brooklyn warehouse venue, with piles of cedar-shavings and trees featured throughout. In the show notes, creative director Sarah Burton explained how a collection that “honored” New York City was also inspired by mycelium, which is a root-like structure of a fungus. If anyone’s wondering how N.Y.C. and fungus are connected, Burton explains its roots in the press release.

“I am so happy to be back in New York, a city that has always been close to our hearts. We showed the Dante collection here in 1996, and then came again with Eye in the autumn of 1999. It is part of our community, a place that has always welcomed us, and this season I want to honour that,” Burton wrote.

Adding, “So this collection is inspired by that idea of community, and specifically by mycelium, by the reality of nature as a community that is far, far older than we are,” said Burton in the show notes. “Mycelium connects even the rooftop of the tallest skyscraper to the plants, to the grass, to the ground, to animals, and to human beings. Mycelium has the most profound, interconnecting power, relaying messages through a magical underground structure, allowing trees to reach out to each other when either they or their young need help or are sick.” 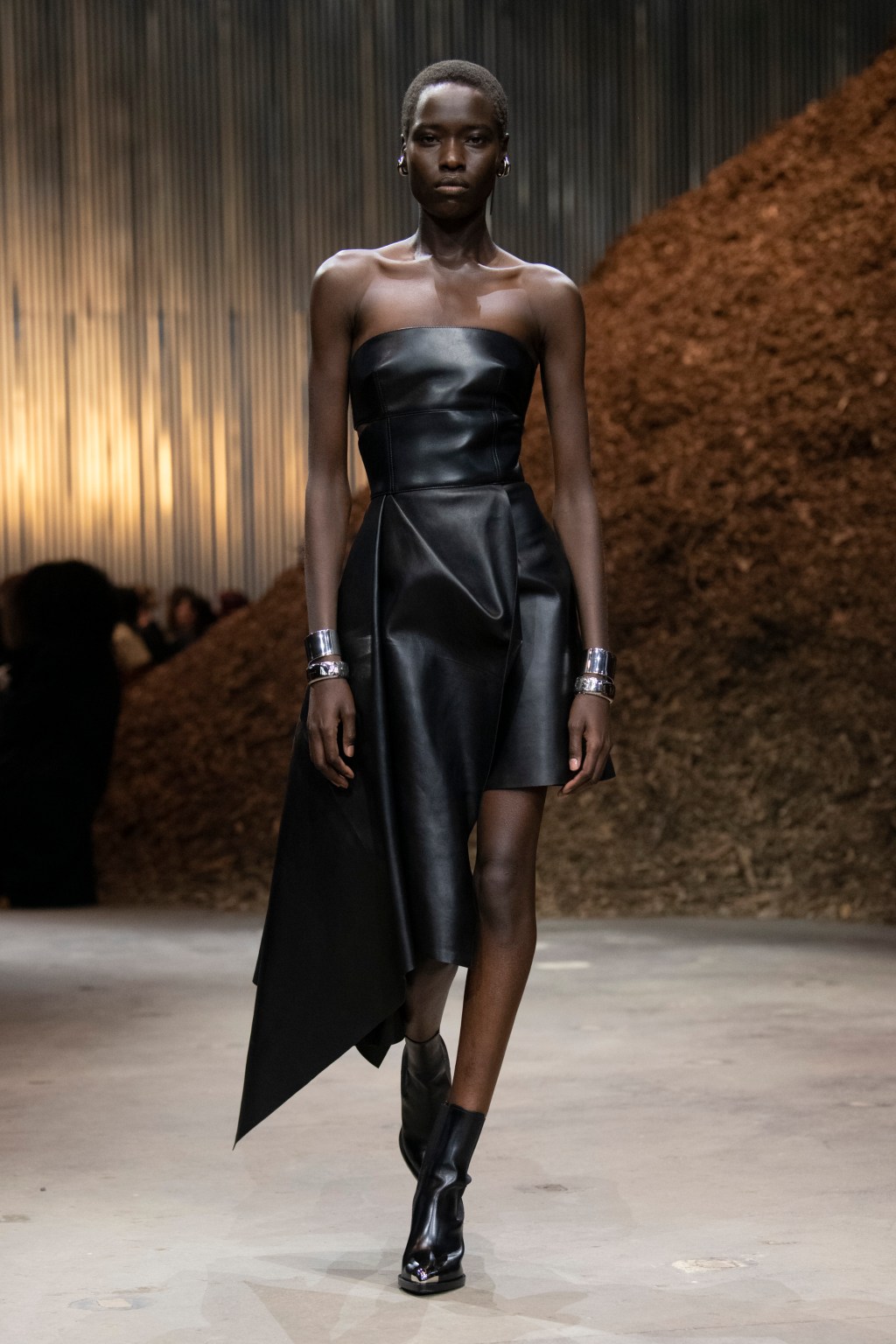 Burton carried that eco-conscious, connectivity theme into the line-up by creating quintessential Alexander McQueen leather looks, (including bustier dresses with a draped skirt, above, which opened the show) in sustainable leather. Other tailored looks and dresses were engineered with knit mushroom spore jacquard. The evolution of Alexander McQueen’s Fall collection feels like an organic progression following her Spring-Summer 2022 line, which also looked to nature for inspiration.

For Fall 2022, Burton continued to convey the mushroom messaging visually in voluminous ruffled dresses, and bags in trippy psychedelic hues of green, bright red, yellow, orange, and blue. She also reinterpreted archival pieces for the show, creating pantsuits tagged with graffiti which paid homage to McQueen’s “No. 13” collection’s unforgettable runway finale moment, when supermodel Shalom Harlow stood on a rotating platform in a white strapless dress being sprayed with paint.

To catch up on every look from the show, watch the full runway experience in the video, above.

Dua Lipa Is the Ultimate Bottega Veneta Babe
Next page