The fashion industry was rocked by COVID-19. As we look cautiously toward the future, we investigate the role clothes will play in a post-pandemic world

The fashion industry was impacted by the coronavirus pandemic quickly and literally. Northern Italy was the first area outside of China that the virus spread to, and the outbreak began during the throes of Milan Fashion Week. Giorgio Armani was the first designer to cancel his runway show, and soon after the hundreds of editors, models, influencers, and other industry figures in attendance flocked back to their respective corners of the globe. A year on and they are still yet to re-emerge.

The pandemic went on to wreak havoc on the retail space, as it did so many other industries. A predicted 20,000 retail stores closed in the United States alone in 2020, with Diane von Furstenberg, Barneys, and J Crew, among the COVID retail casualties. According to the Business of Fashion and McKinsey & Company’s annual report, the last 12 months saw the industry post record low economic profits, down 93 per cent across the board. But there were also strange, contradictory trends too. Despite the majority of the world having nowhere to go, buy-now pay-later services like AfterPay celebrated record sales, doubling their profits by March. Bottega Veneta—the undisputed cult brand of the moment—celebrated a 21 per cent uptick in sales in the third quarter of 2020, while Hermès, purveyors of the world’s most beloved handbags, saw a 7 per cent ncrease in the same period.

Net-a-Porter saw a predictable spike in the sale of loungewear and investment jewellery and handbags (all that money not spent on bougie dinners and Ubers had to go somewhere), but also noted the emergence of less obvious consumer habits. “We saw an increase in interest for fine jewellery that carries cultural meaning, including evil eyes, zodiac signs, and symbols that mean ‘calm’, ‘strength’, or ‘wholeness’, says Libby Page, Net-a-Porter’s global market editor, citing brands like Foundrae, Sydney Evan, and Anita Ko. “The added relevance and meaning offered a kind of greater significance that I think people were really drawn to during such an uncertain time.” In short? People hadn’t stopped shopping, they were just shopping differently.

This year is now well underway, and after watching the Autumn/Winter 2021 shows play out in February and March – the second ready-to-wear season to take place virtually – many of us were left wondering what style will look like in a post-pandemic world. Some designers opted for total pragmatism, others reached for optimism in the form of unabashed glamour and frivolity. When we look back on this year we are likely to see it as our transition period, the space between the confusing hellscape of 2020 and a return to something resembling normality in 2022. How we dress in that time will largely be informed by trends that began to take shape in 2020, but which have transformed the fashion industry permanently. Each is evidence – uplifting evidence – that adversity breeds innovation, and that the ever-malleable fashion industry is adapting to our new world order with grit and gumption.

Many of the shopping trends that defined 2020 followed the dictates of logic (activewear, homeware, ‘Zoom blouses’) but some totally defied it. Enter stage right: the rise of rental fashion. Once the sole remit of wedding guests and those with impending black tie functions, the rental landscape has drastically transformed in the last couple of years thanks to companies like By Rotation, My Wardrobe HQ, and Hurr. What’s different? The reactive, user-led business model, where instead of buying and holding stock themselves they facilitate wardrobe-sharing. Think Airbnb for clothes.

With social media making the lifespan of trending fashion pieces ever shorter, forking out hundreds of dollars on a designer piece you’re likely to feel ambivalent toward in three months makes little sense – particularly in an era where we’re so attuned to the environmental downsides of fashion wastage. The new wave of rental services trade on the immediacy of trends, while simultaneously expanding the lifespan of each product. In Australia, David Jones partnered with rental juggernaut Glam Corner on a series of in-store pop-ups. In Copenhagen, cult Scandi brand Ganni launched their own rental service called ‘Ganni Repeat’. In China H&M began road testing an internal rental service, with plans to expand globally. Rent the Runway – the OG of high fashion rentals – has revealed plans to become the ‘Amazon Prime of renting’, eventually replacing the need to own 90 per cent of your wardrobe. The future of fashion? A radical re-thinking of the nature of “ownership”.

There was once a time when professing to own second-hand clothing was anathema to fashion types. Now, even the highest echelons of the industry are embracing the so-called ‘circular economy’. Over Christmas, Miu Miu unveiled a bespoke collection of upcycled party dresses, mixing dead-stock from the brand’s atelier with vintage pieces from a curated selection of international sellers. With only 80 pieces made and the resulting creations sold in-store at one of nine international boutiques, the project was Miuccia Prada’s hyper-refined take on sustainability, turning up-cycling into its own kind of couture. We’ll see this idea play out again in the spring, when Miu Miu unveil a collection of up-cycled reworked vintage Levi’s. This is, as they say, only the beginning.

Elsewhere, we’ve seen Gucci partner with The RealReal to incentivise the re-sale of old-season pieces, revealing in late 2020 plans to eventually launch their own buy-back initiative whereby customers can trade in their unworn Gucci goods for store credit, which will then be upcycled for new collections. Levi’s unveiled their own buyback scheme in October, a couple of weeks before Alexander McQueen announced a groundbreaking circular economy approach with Vestiaire Collective. Alongside a ‘Brand Approved’ programme which authenticates second-hand pieces, McQueen too invited long-time customers to sell their old season pieces in return for store credit.

2020 also saw luxury e-tailer Farfetch partner with Thrift+ offering their customers store credit in return for their secondhand clothes which were then sold on the Thrift+ website. In London, long-time sustainability maverick Bay Garnett launched a first-of-its-kind Oxfam pop-up at Selfridges Oxford Street flagship, selling thrift store clothes for $40 alongside thousands of dollars worth of ensembles by Saint Laurent. It may prove the ultimate democratization for an industry that has too-long run on exclusivity and inaccessibility.

2020 saw radical cultural changes that had nothing to do with the coronavirus, namely a long overdue global fight for racial justice. Among the proliferation of the #BlackLivesMatter hashtag, we saw genuine change take place in the fashion industry, including the launch of Aurora James’ 15 Per Cent Pledge. James – whose accessories label Brother Vellies is a long-time favourite among die-hard fashion types – highlighted that despite making up 15 percent of the population, black designers are given less than 1 per cent of venture capital funding. She asked mainstream retailers to commit to representing 15 per cent of black-owned brands – and so far Moda Operandi, Macy’s, Bloomingdales, and Sephora are among the signees.

The success of the 15 Per Cent Pledge spoke to a drastic change in the relationship between customers and retailers – who now not only expect but demand that the brands they invest in reflect their personal values. This has seen small, independent designers experience an outsized industry influence, rallying together hundreds of thousands of customers who were looking to “vote with their wallets” during the pandemic, even in a moment of mass economic uncertainty.

Accessories and ready-to-wear label Telfar (their affordably priced but hard-to-get handbags are nicknamed the ‘Bushwick Birkin’) are perhaps the best example of this phenomenon, an independent business with strong, consistent values, delivering product on a ‘drop’ basis to reduce deadstock and environmental wastage. Founder Telfar Clemens had been toiling away for 15 years when coronavirus hit and, like most small brands, assumed the pandemic would be a death sentence. But the accessible price point and inclusive brand attitude – they run on the ethos “we’re not for you, we’re for everyone” – proved perfect for the cultural moment. Since last August, they have grown 270% week on week, and in December the New York Times dubbed 2020 ‘The Year of Telfar’.

Elsewhere, the marriage of cohesive brand values and a bold, unique aesthetic has elevated the likes of Harris Reed – a recent Central Saint Martins graduate who promotes gender fluidity and inclusivity, who counts Harry Styles among his many fans – and Thebe Magugu, a South-African based designer who donates portions of profits each season to different charitable endeavours. Libby Page at Net-a-Porter notes the ubiquity of this trend too, citing Christopher John Rogers, the black queer up-and-coming designer who created Kamala Harris’ inauguration outfit, and Kenneth Ize, a designer dedicated to “preserving the heritage of Nigeria through textiles”, as being among the e-tailers most popular new names.

It was a telling sign about what the future of fashion might look like when Pierpaolo Piccioli – the Valentino creative director beloved for his other-worldly, utterly opulent evening wear – collaborated with Levi’s for Spring / Summer 2021. The brand unveiled a reworked take on the bootcut 517 style, worn with flat shoes, a crossbody bag and blazer. Times, they are a-changin’ indeed.

The rise of a kind of high-end casual is probably the most predictable of all trends to come out of the pandemic – but the way designers are exploring it is surprisingly compelling. For their second ready-to-wear collection as Prada co-creative directors, Miuccia Prada and Raf Simons unveiled skintight bodysuits, made in comfortable jersey and finished in bold, graphic prints. A kind of souped-up take on the ‘longjohn’ that appeared in both the menswear and womenswear Fall/Winter 2021 collections, the bodysuits were worn under traditional tailored suiting or fabulous fringed skirts. The idea being: We won’t be returning to the ‘old’ way of dressing without taking a piece of 2020 with us.

An unsurprising Business of Fashion report published in January revealed that the sales of high heels have dropped in double-digits in the last 12 months. What’s replacing them? $4,400 crystal-encrusted sneakers by Jimmy Choo, or the Dior X Nike Air Jordan collab, which experienced hour-long waitlists and immediately sold-out globally, despite costing a cool $2,900 a pair. Add to that the sudden ubiquity of souped-up denim.

Last year, cultish British brand Chopova Lowena sold out 300 pairs of jeans hand-painted by the artist Faye WeiWei (price was on application) while MATCHESFASHION quickly snapped up Central Saint Martins graduate Kevin Germainer’s debut collection of $2,000-a-pair crystal-embellished stove-pipe jeans. All of which suggests that even when we return to “real life”, we’ll be taking the comforts of this one with us.

“WHAT COMES NEXT?” WAS FIRST PUBLISHED IN THE NINTH EDITION OF GRAZIA INTERNATIONAL. PURCHASE YOUR COPY HERE.

topics: through the hourglass 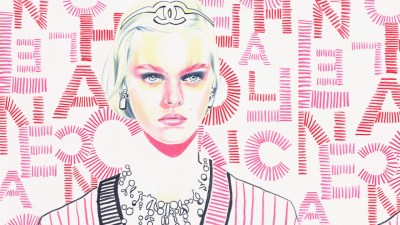