Raf Simons Is Shutting Down His Namesake Label

Raf Simons has overnight announced the closing of his namesake brand. The Belgian designer and stylist wiped the label’s Instagram account and shared a single post, explaining that Spring/Summer 2023 is the “conclusion of an extraordinary 27 year journey and the final season of the Raf Simons fashion brand.”

His final show was held at Printworks in Surrey Quays in October where he presented SS/23. It was initially delayed from the London Fashion Week calendar due to the passing of Queen Elizabeth II.

Simons launched his eponymous brand from Belgium in 1995. It was established as a menswear label with a focus on youth culture and eventually catapulted his career to international acclaim. He went on to nab roles at Jil Sander, Dior and Calvin Klein.

In 2020 it was announced in a groundbreaking move that Simons would move to Prada where he currently serves as co-creative director alongside the formidable Miuccia Prada. His subversive approach to design has informed recent runway collections lending unexpected style cues to the heritage of Prada.

Simons is not the only one to rock the luxury fashion space in 2021. In September, Riccardo Tisci stepped down as chief creative officer of Burberry to be replaced by Daniel Lee. Lee had recently departed Italian fashion house Bottega Veneta after he sat at the helm between 2018 and 2021. 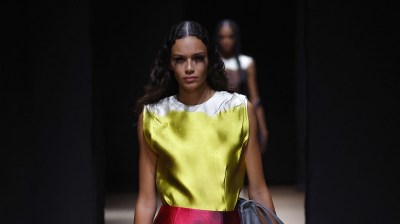