Can she do no wrong?!

The cast of Emily in Paris is in Manhattan this week in a buzzy countdown to the season three premiere next week. If Lily Collins’ first three looks (in one day) was any indication, the promotional tour was always going to be incredibly stylish. It comes as no surprise that Camille Razat is stealing the show after wearing Bottega Veneta on top of the Empire State Building and on the streets in Prada.

Razat was captured by paparazzi in midtown wearing a full look from the Prada Fall/Winter 2022 runway. To fight the seasonal chill she layered an oversized blazer embellished with feathers over the top of a brown knit and spliced skirt from the Italian fashion house. Her hair was slicked into a low ponytail.

The following day she was photographed alongside her co-stars Collins and Ashley Park arm-in-arm as they walked the streets of SoHo. In a slight change of tune Razat wore a silky blue maxi underneath a grey twill bomber jacket, paired with plaid socks and bejewelled pumps. Taking cue from the biggest hair trend of the season, she also wore her hair out with a sweeping side part.

The actress and model will reprise her role as Camille in the upcoming season. If the first look of season three is anything to go by then the French character may start to play with a little more print, no doubt inspired by her American best friend Emily.

Speaking to Entertainment Tonight in October, Collins teased what we can expect. “More love triangles, more drama, more laughs, more fashion, more locations, more France!” she said, adding that we should prepare “a lot of cliffhangers.”

Emily in Paris will return to Netflix on December 21. Watch the trailer below. 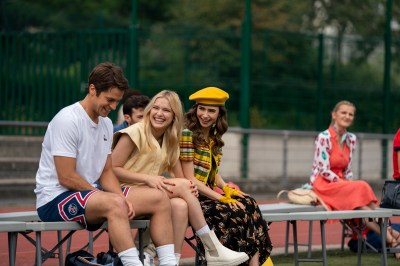