So the most hyped show of the most high-stakes fashion week just happened at the grandiose Hotel Salomon de Rothschild in Paris and while there was plenty on the runway and backstage to ogle, the most chat-worthy action really happened outside the front door.

Given Rihanna’s Fenty x PUMA range success has been built mostly on its street cool vibe and celebrity fans, the Victoria’s Secret model-studded front row of her first ever Paris Fashion Week show was always going to be a spectacle. Little surprise, too, most famous faces turned up wearing pieces from the capsule range released earlier this month. Doetzen Kroes did her best Sporty Spice impersonation in a Fenty x PUMA cropped sweat top and track pants, as did Elena Perminova (the model wife of a Russian billionaire) in a black lace-up micro crop from the range released earlier this month. Jourdan Dunn mirrored Perminova’s top choice buy in cream, teamed with the matching lace-up flare pants. That all said, the stand-out look from the FROW was express delivered by Italian fashion blogger Chaira Ferragni. Her fierce, bondage-style leather Anthony Vaccarello mini skirt topped with an Off-White sweat top with cross-over back was a stark contrast to the candy pink ensemble worn by Rihanna for her runway debut. The show itself? Inspired by the idea of “Marie Antoinette at the gym” (which explains the elegant chandelier-lit Parisian venue for a sportswear presentation), one American news site scathingly deemed the collection “designed to look great on Rihanna and fashion models only”.

SEE ALL OF THE FENTY X PUMA BY RIHANNA SS17 RUNWAY LOOKS HERE.

The fairy-floss pink look the singer donned for her final runway bow looks great in photos, but isn’t something your average style-focused woman would walk out the front door in. (Which, let’s be real, probably suits Rihanna just fine.) Rihanna in her own designs during the finale of her Fenty x PUMA SS17 show
Credit: NOWFASHION

That aside, the pastel colour palette was unusual for sportswear and is sure to be a hit with customers. The lingerie-inspired with lacy fabrics might not catch on quite as quickly, but staple hoodies and track pants in army green and nude tones are commercial gold. Odds on, this head-to-toe luxe copper brown number worn by Rihanna backstage will sell out in minutes when it hits stores. We feel a pearl ankle-chain movement coming on… 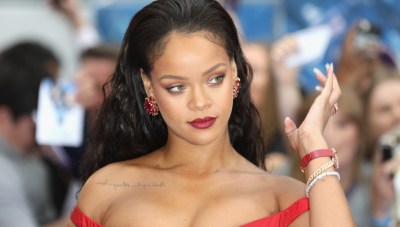