The 2016 MTV VMA red carpet you absolutely need to see The VMAs this year are predicted to be one of the best in history; Kanye West will be given an unscripted, un-approved four minutes to do “whatever he wants”, Beyoncé, while nominated for 11 awards for Lemonade, has been confirmed to perform, Rihanna will be honoured with the Vanguard Award and Britney Spears is predicted to make her comeback.

GRAZIA’s entertainment editor, Jessica, and editorial director and fashion writer, Rachel, are taking you through the red carpet arrivals as they happen. And leading the carpet this year is Beyoncé and her daughter. Beyoncé with the cast of LemonadeCredit: Getty Images
Jessica: Think about Beyoncé’s Met Gala costumes, her Formation World Tour costumes and even her Hawaiian holiday attire; every look is always a little bit more spectacular than her last. And tonight, with a fierce architectural feathered neckline, this is no exception. Like the old rule says, “dress for the job you want”, Beyoncé is almost reminiscent of the 11 moonmen she wishes to take home tonight. And what could be more perfect than a matching good-luck charm in Blue Ivy?

Rachel: There aren’t many women alive who could pull off this Francesco Scognamiglio Couture gown with its off-the-charts feathered power shoulders, but then Beyoncé is no ordinary woman, especially when there’s a red carpet involved. Absolutely stunning in what I think will be an enormous colour this coming spring: mint green (a follow-on from the pastel pink and lavender of this season). Those Lorraine Schwartz jewels are to die for too. JESSICA: Oh Stella, always one for a butt-shot. If you don’t believe me, take a look at her Instagram page, this model knows its one of her best assets. Fresh from shooting the Victoria Secret Holiday campaign, Miley Cyrus’ ex arrived to the awards with Jeremy Scott outdoing the designer himself.

Rachel: What’s the best accessory for a straight-off-the-runway Jeremy Scott for Moschino Cruise 2016 outfit? The designer himself (the pair arrived together). This 70s-inspired two-piece looks like it was made for Stella, but it was actually Hailey Baldwin who modelled it (with the same hair and make-up) on the runway. Still, a fun choice for the music biz’s most seriously fun night. Jessica: Hey, Justin Bieber, take a look what you gave up! Baldwin has really cleaned up her look in the past few weeks with a good chop of her long blonde hair and elegant wardrobe choices. This being one of them, she looks the best I’ve seen her.

Rachel: This is the best I’ve ever seen Hailey look. She hits on three of the biggest trends for award season: pants suit, sequinned and see-through. Love everything about this outfit, from the Georges Chakra jumpsuit to her Lorraine Schwartz jewels, nineties-throwback hair and golden girl makeup. Is it just me, or can you see a little Ariana Grande channeled here? Jessica: Minaj looks incredible, this dress really accentuating her wonderfully womanly curves. It’s a look (with all it’s cut-outs), however, we have seem time and time again. Perhaps her performance wardrobe when she takes to the stage with Ariana Grande tonight will impress a little more. Jessica: Wow! One of my favourite musicians has blown me away with just how elegant she looks this evening. I truly didn’t expect sparkles from the alternative singer-songwriter. Channelling Kourtney Kardashian in Balmain at Yeezy Season 3 launch, Halsey stuns. Props to her make-up artist and my go-to berry/plum lip. Always a winner.

Rachel: Like Hailey Baldwin, Halsey hits the sheer jumpsuit trend nail on the head with this one by Yousef Al-Jasmi – but with her own alternative (almost goth) twist. This doesn’t have the same wow-factor as the Hailey’s Cali-golden look though – and the cropped ankle is less flattering than the wide-legged pants we’ve seen in droves on the red carpet so far. Jessica: It’s so obvious how this angel managed to get cast in a Victoria Secret show after just one audition. Love the dress (how similar is it to Australian label Aje’s aesthetic a couple of season ago?) but let’s just say I’m really happy she covered up tonight because between the VS Holiday campaign shoot in Paris and the VMAs in New York, Hill made another V stop and shot the cover of V magazine. Wasn’t feeling that (highly naked) look with Troye Sivan at all.

Rachel: Of all the dresses in all the world, she had to choose this one? This looks like something from House of Dereon 10 years ago (a la Destiny’s Child stage costume), complete with burnt out sheer patches and jagged edge, but it is in fact Moschino. Yes, she could wear a (sequined) garbage bag and look amazing, but she didn’t have to prove it. Jessica: There’s a comment box below for anyone who can tell me how the America’s Got Talent judge manages to look forever young. Jessica: A chic and classic look for the singer. We haven’t seen red on the carpet thus far but Tinashe does add another mark to the flared-leg tally-board.

Rachel: Red carpet pyjama dressing at its finest (and we all know sleepwear as daywear is one of the hottest trends right now). Ariana Grande Jessica: The latest celebrity to be sued for copyright infringement for her track One Last Time, Grande takes it in her stride tonight. It seems we’ve graduated from the side-fridge to a permanent ponytail which makes me wonder; when will be finally see variation in Grande’s hairstyles? Surely it’s grown out by now? Don’t be fooled though, if you’re not wowed by this look, she will undoubtedly blow your mind come her performance with Minaj tonight. And with arguably the best pipes in the current music world, she’s up for five nominations and will take a home a few Moonmen tonight.

Rachel: She’s one of seven stars I’ve spotted wearing wide-legged black pants so far this red carpet (red alert: hugest trend of the night) but her tiny lace bustier is a first. Super cute. Super on-brand for her. Safe but a big eight out of 10 from me. Jessica: You could put a potato sack on this woman and that face and body would carry it. But I’m a little underwhelmed by this look TBH.

Rachel: Please refer to Ariana above re. my thoughts on black pants. (In a nutshell: TICK!) But while Ariana looks little a doll in lace dress-up, Joan is all power woman in this fierce Off-White leather bustier. Amazing! Credit: Getty ImagesJessica: All eyes are on Britney tonight. We’ve been teased this is her realtime comeback and I commend her sartorial choice thus far. Demure, understated elegance at its best. And unlike that carpool karaoke performance, there’s nothing awkward about this look. I’ll have my fingers and toes crossed tonight that her show is worth the hype.

Rachel: Safe choice verging on boring, but credit for her recognising this isn’t her night and surprising us with her sartorial restraint. The less said about those awful extensions, though, the better. Jessica: The VMAs are known as as the informal awards night (dress code, speaking). But as a newbie to the music land, this is not ok. Cara is a Drake-endorsed musician with incredible talent. She’s young so perhaps is caught up in a little with “I’m a muso” syndrome but I’m disappointed, I expected more from her.

Rachel: I applaud this young woman for fronting in something she felt comfortable (ie herself) in, but I can’t help thinking she’ll look back one day and regret a wasted opportunity. It’s one night of the year to have some fun playing dress-ups – embrace it Alessia! Jessica: THIS is how a newbie should attend her first VMAs. Flawless.

Rachel: Surpeme in Saint Laurant – touche Zara. That sculptural dress is amazing, as are the shoes, but it’s those emerald cuff earrings that have my attention. I’d slick back my hair to show them off too! Jessica: Maybe in West’s four minute speech, he can talk about how amazing Kardashian looks tonight. The reality star who has reached her post-baby weight goals – and continues to shrink – looks the perfect amount of Yeezy and herself with a form-fitting lace-up dress. I love this, right down the deliberate “I’m going to pull this side of my dress off my shoulder”!

Rachel: Sorry, but how incredible does Mrs West look here? Spectacular, with not a sequin required. This style of dress was built for her curvaceous figure: the off-the-shoulder deep V-neck and long sleeve balance the short skirt making it almost (I said almost) classy. Given Kanye’s white jeans and tee, this pair were clearly going for the “I so wasn’t trying” type of attention-seeking ensemble. 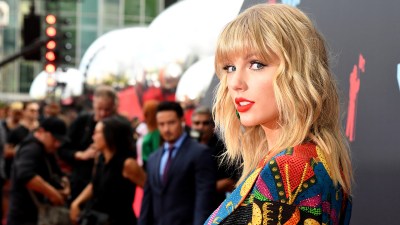 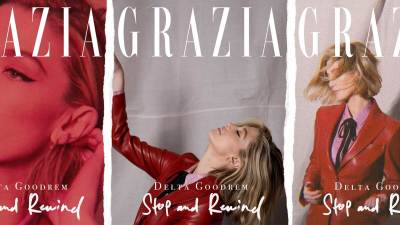 Zara Larsson Is Older, Wiser And In Love