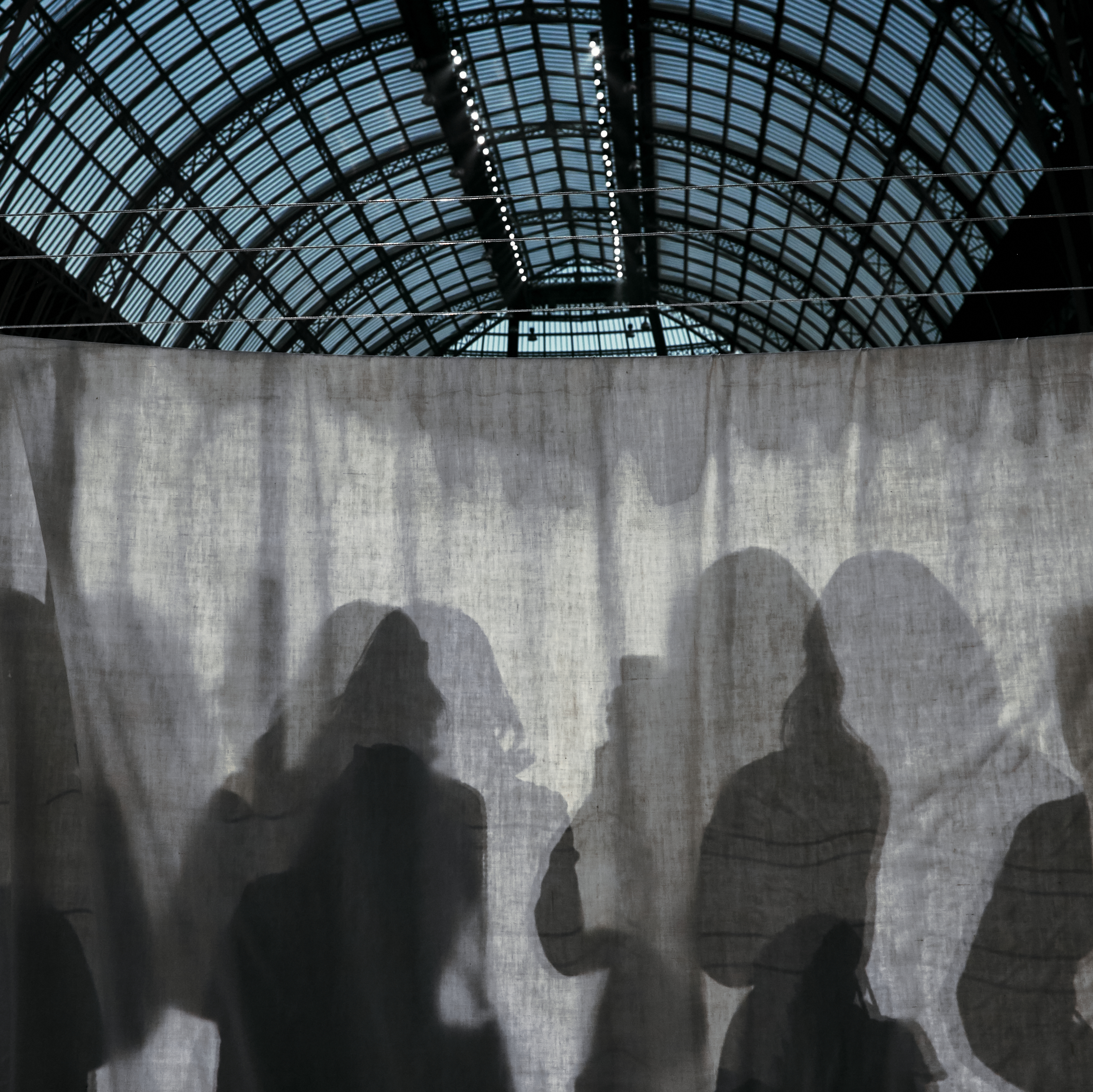 At age 11, Gabrielle Chanel’s mother died. She was swiftly sent to a convent in the remote region of Corrèze in France, where at the Abbey of Aubazine her “aunts” – the convent’s strict nuns – would raise her and in turn teach her how to sew. It was here, in the the cloister garden of the orphanage, that Virginie Viard landed for Chanel’s Spring-Summer 2020 Haute Couture show.

Last September, Viard took a trip to Corrèze to visit the place that bore so much significance on both the designer’s life and the clothes she made. It was a chapter in Chanel’s history Karl Lagerfeld was not fond of, “He always said, ‘Oh, it’s ugly, ugly!’ she told Hamish Bowles backstage. “But I said to myself, I must do this.”

Thankfully, she did. Here, she saw the convent in stark contrast to how Lagerfeld did; she was enamoured by its “uncultivated” cloister garden, charmed by its laundered linen. It made her “think of the summer, of a breeze fragranced with flowers”. A visit that moved her so she decided to explore Chanel’s oft oppressive but nonetheless formative years here through the practise of couture, evoking the monastic spirit of the convent and girlish allure in Paris today. 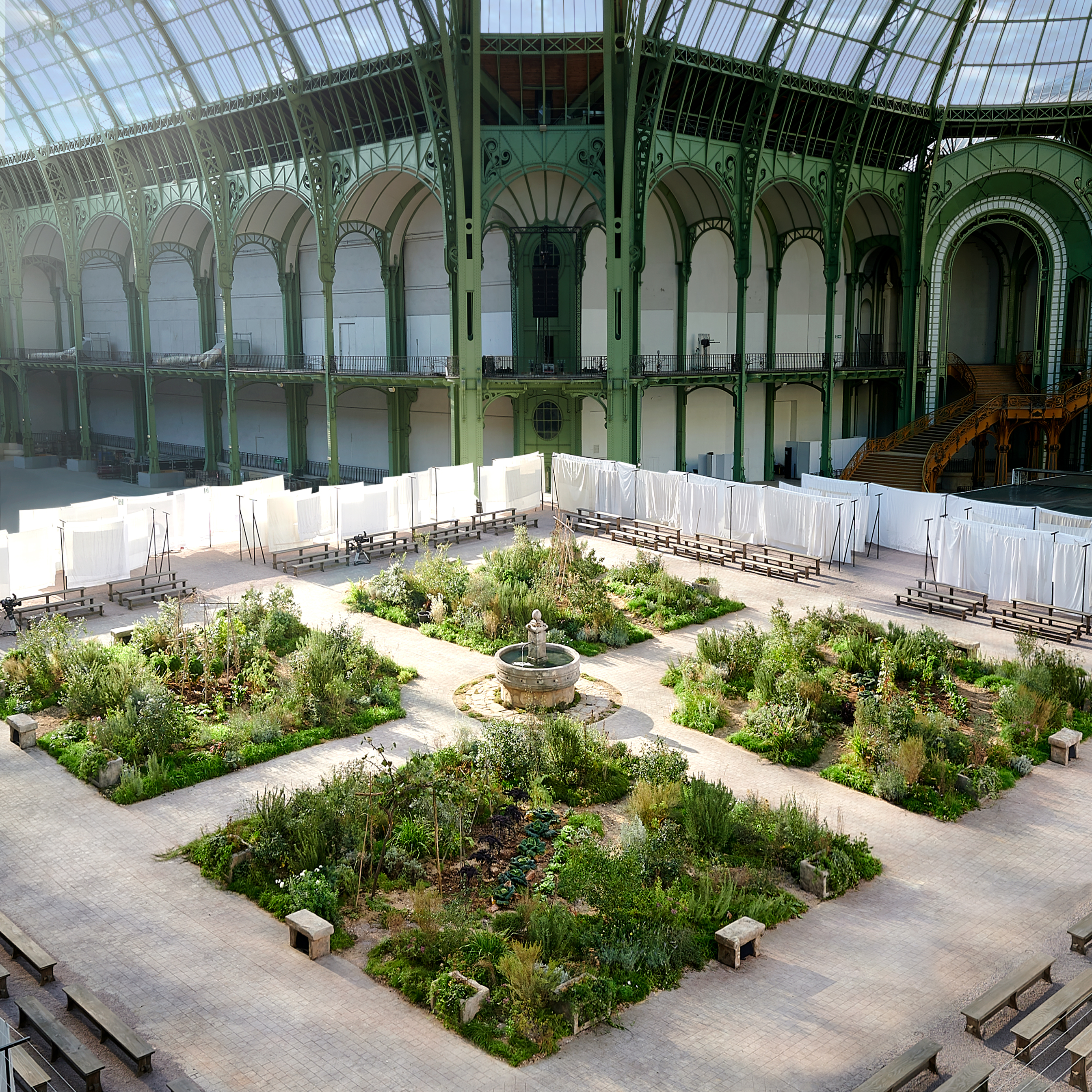 The nave of the Grand Palais was transformed into the unkempt cloister garden of the ancient Cistercian covent. White linen sheets hung up to dry, as if Viard’s Chanel girls had done a spot of laundry prior to the show. They were dressed in cotton piqué-collared coats and blouses, smocked dresses and black patent schoolgirl shoes with white ankle socks.

There were straight dresses in ombré wool or tweed with braided belts sported high on the hip and lovely gingham dresses in two-tone silk. Peter Pan and pelerine collars were woven entirely from white plain-weave and gingham organza ribbons, forming a herringbone pattern, while big Bertha collars were embellished with embroidery and echoed the paving stones and stained glass windows of Aubazine. They wore double-breasted pea coats with their tweed skirts and long coats with embroidered flounced collars, evoking the pious and prim spirit of the schoolgirls inside the convent in Corèzze. “I liked the idea of the boarder, of the schoolgirl, the outfits worn by children long ago,” Viard posited. 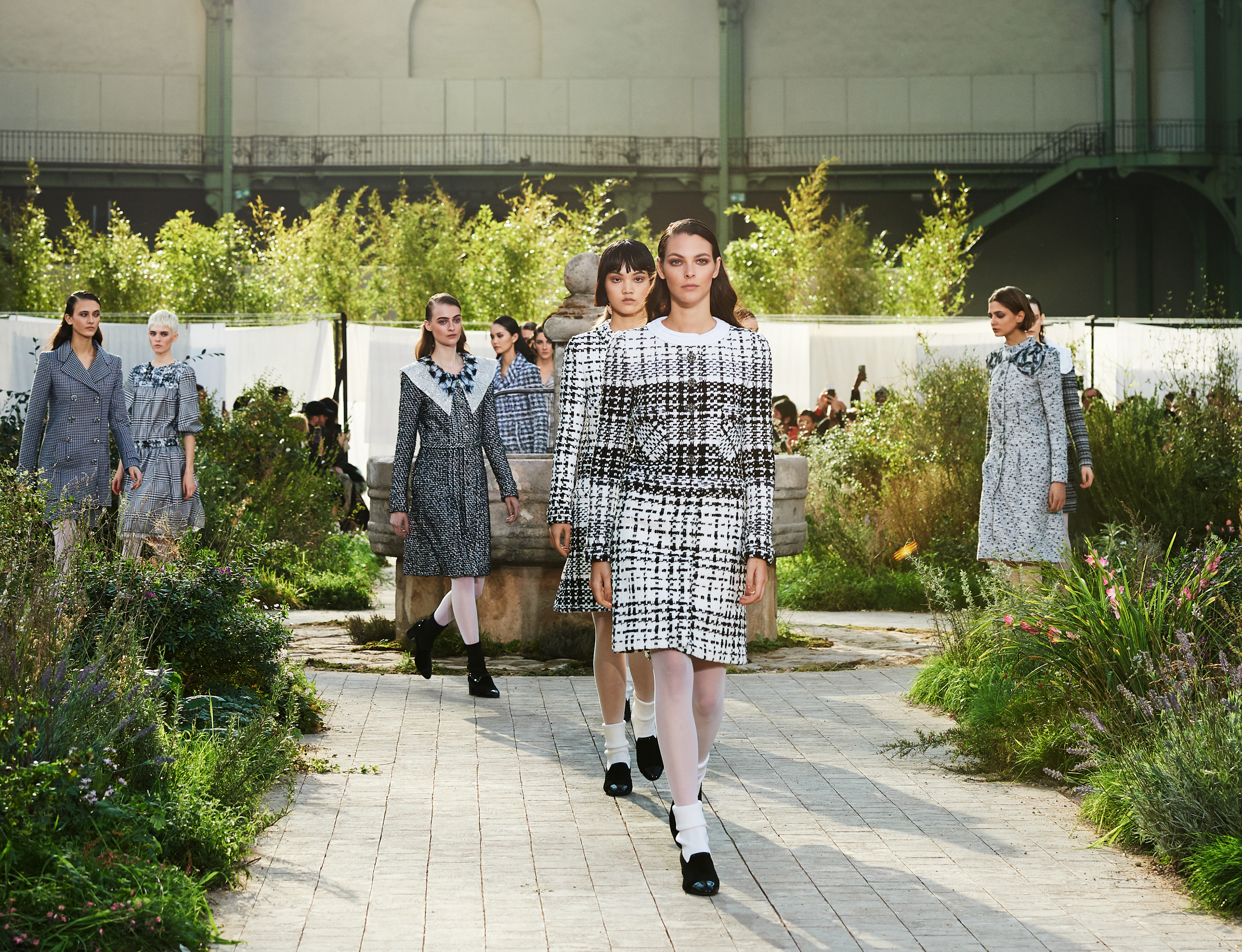 The harsh rigour of convent life – and its austere palette – was enlightened, however, as the collection progressed. A purity emerged via a large ivory taffeta cape over a navy blue taffeta dress and tiered dress in crêpe enhanced with a trompe-l’oeil belt embroidered entirely with sequins by the House of Lesage. While filmy featherweight dresses with tulle petticoats revealed a refined, delicate construction, as too lace dresses dotted with embroidered flowers and occasionally adorned with a criss-cross pattern.

While the collection was indeed reflective of Viard’s simpler, more stripped back approach to design, haute details were manifest, and superbly so. The strict suits of pupils rubbed shoulders with sublime structured dresses with an ethereal finesse, all in tulle with layers of black and white transparency, occasionally enclosing embroidered flowers, or concluding in flounces. While the motifs in pastel sequinned scrolls on certain suits recalled the motifs on the stained glass windows and the paved floors that Gabrielle would see every day.

Again these motifs of Aubazine – the stained glass windows, the paved stones, the gardens – inspired deft details of couture. A full skirt in tweed, accompanied by a cropped jacket embroidered with tiny pieces of rhodoid, was painted by hand like shards of stained glass, while a dress woven with matte pastel sequins was to evoke the refraction of light on the windows.

The flowers of Aubazine were reimagined in colourful motifs over dresses in lace and illusion tulle. As if in an herbarium, these delicate flowers were trapped inside the tulle of dresses, blossoming beneath organza flounces. Multicoloured pansies flourished over a strapless dress in blue chiffon, while embroidered bouquets bloomed on a blue-grey organza skirt worn with a blouse in poplin and lace. 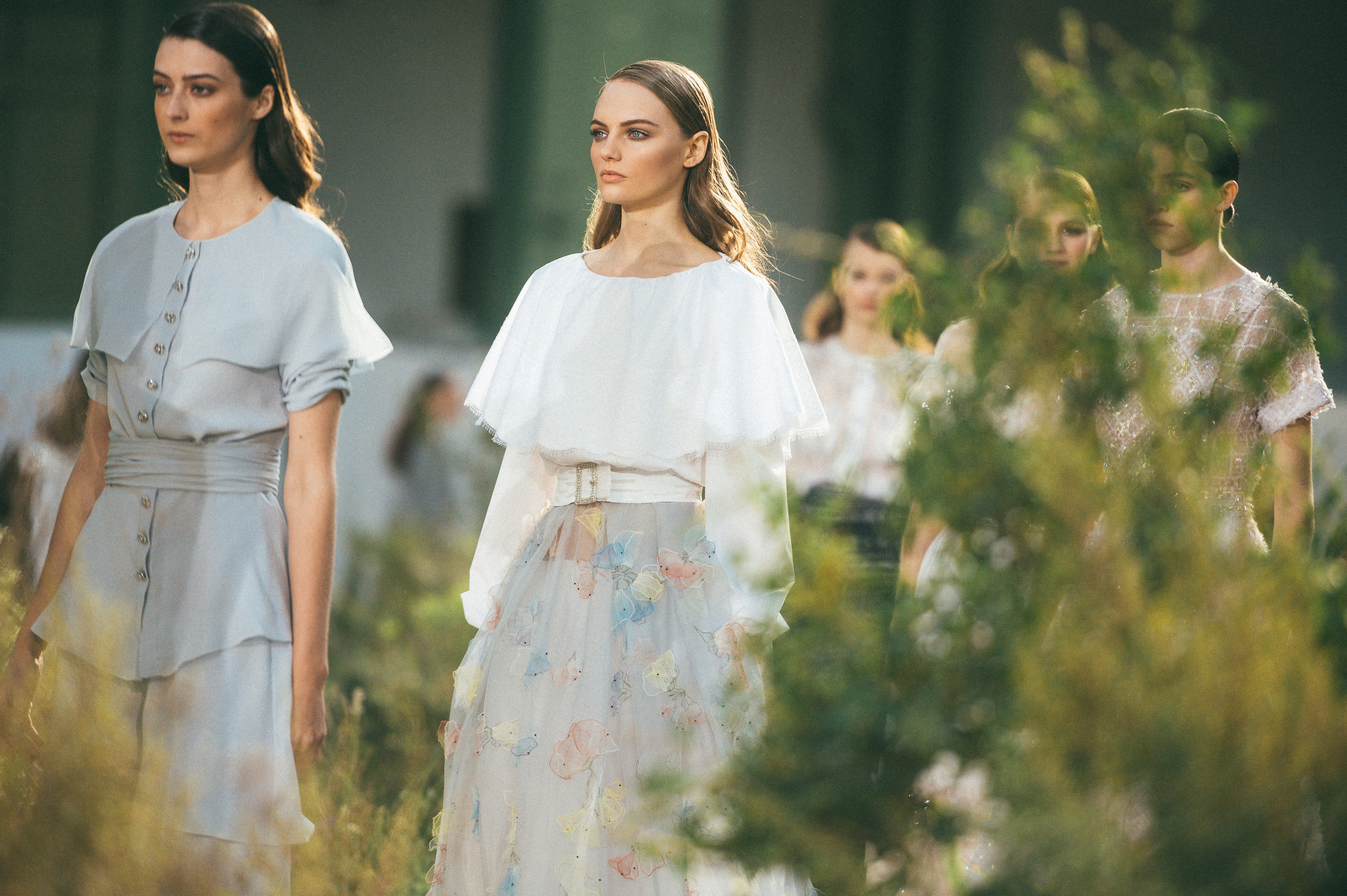 Unlike Lagerfeld’s theatrics, Viard fine tunes the tools of couture with a delicateness and softness which also makes her collections utterly wearable. Even the wedding dress revealed a simpler form; in crêpe georgette with a triple Peter Pan collar in tulle and a veil embroidered with branches of wisteria, it was short, its abbreviated hem indicative of Viard’s understated quietude. 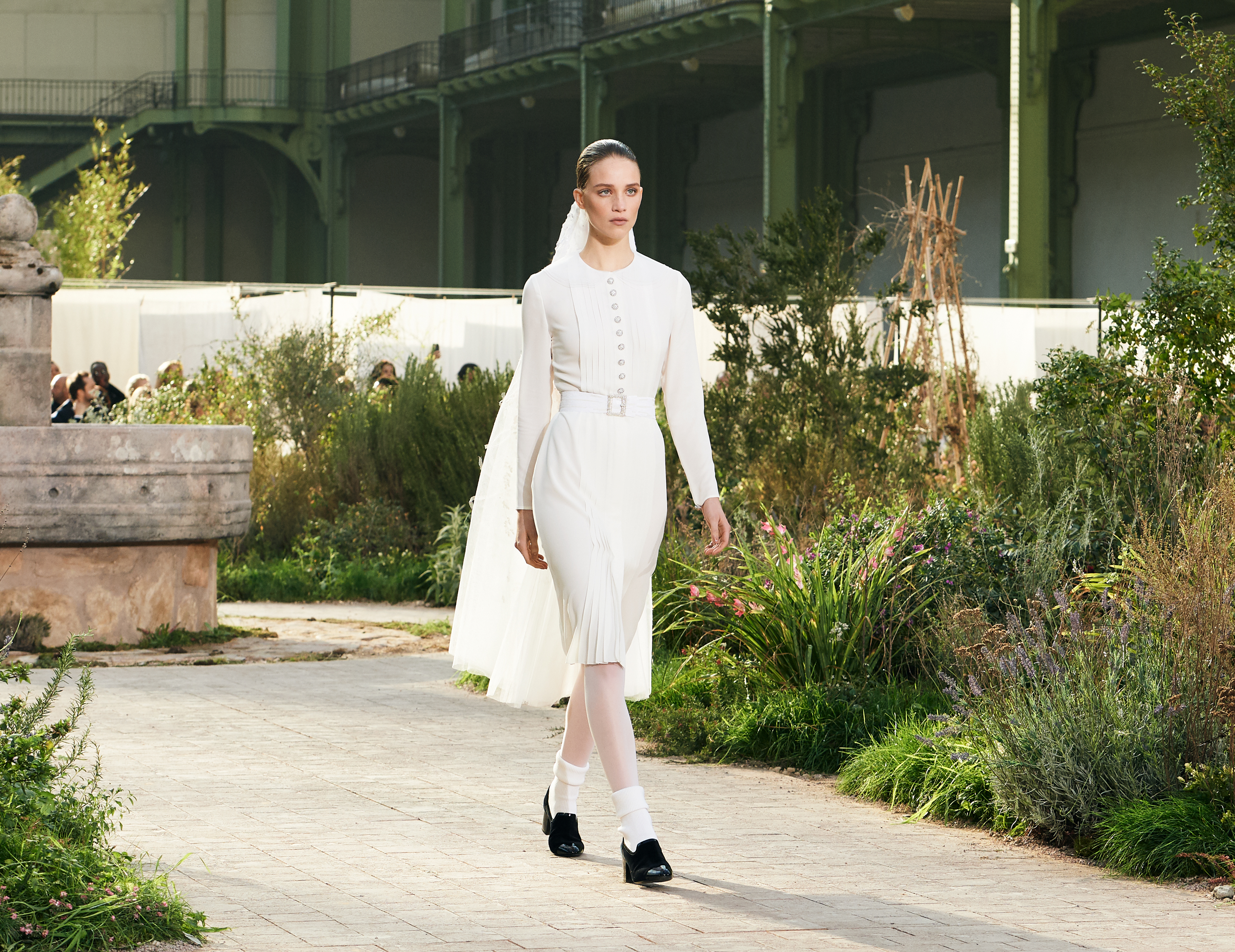 Her new-era Chanel is also far more introspective, dissecting the private life of Gabrielle and paying tribute to her in precise, intricate ways, such as the vast three-storied library in her Rue Cambon home and famous mirrored staircase in the atelier of previous collections. “Karl didn’t like those things,” she mused backstage. Perhaps it is this that identifies the key difference in their aesthetic: where Lagerfeld loved a grand gesture, Viard sees beauty in the mundane and quotidian, and it is this which is likely to become her legacy.

All imagery courtesy of Chanel