Well-Read and Wondrous. Virginie Viard Opens The Next Chapter For Chanel Couture

Virginie Viard does Chanel Couture by her own book, writing a new narrative with irresistible savoir-faire

It’s no secret the late, great Karl Lagerfeld was an avid reader. He loved books so much, he collected them – thousands of them – boasting a nonpareil library of some 300,000 literary works. At the 2015 International Festival of Fashion and Photography, Lagerfeld explained, “Today, I only collect books; there is no room left for something else. If you go to my house, I’ll have you walk around the books. I ended up with a library of 300,000. It’s a lot for an individual.” Lagerfeld’s replacement at Chanel, Virginie Viard, also loves to read. An eternal book lover, she too has a fondness for literature, a passion realised in Chanel’s Fall-Winter 2019/20 Haute Couture show. 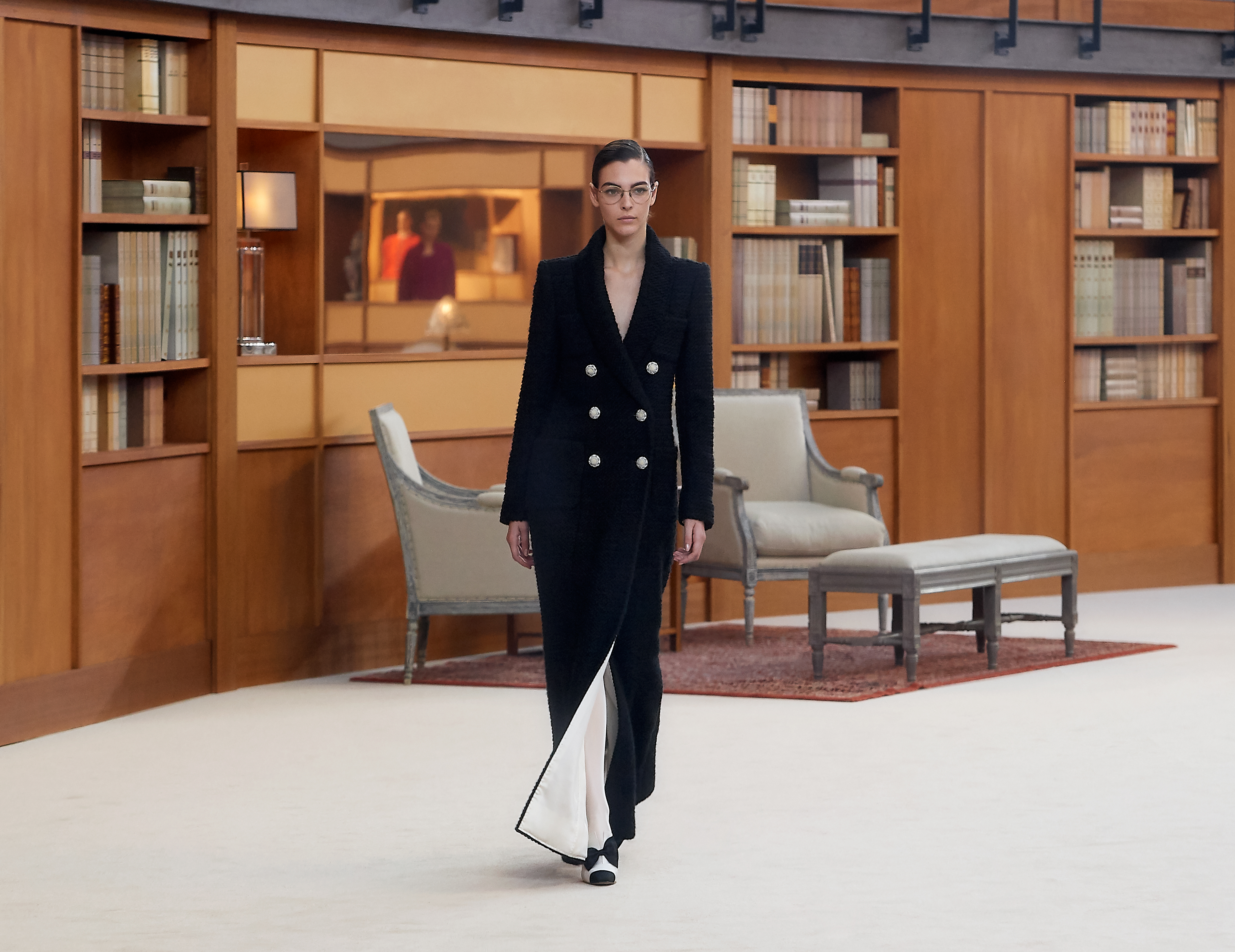 In what was a kind of beautiful collision of Viard and her inimitable predecessor, overnight, the Grand Palais was transformed into a grand circular library replete with walkways and traditional sliding staircases, a kind of homage to the brilliant, bookish minds of Chanel’s creative genius past and present. There were banquettes and wing back chairs, coffee tables and Persian rugs, stone lion bookends (an ode to Mademoiselle Chanel who was a proud Leo) and of course, books, row upon row which scaled the great walls of the Grand Palais, evoking the quietude and serenity of a library space. It was also intended to conjure the calm of reading a book; an invitation by Viard to experience the repose procured by the act of reading. 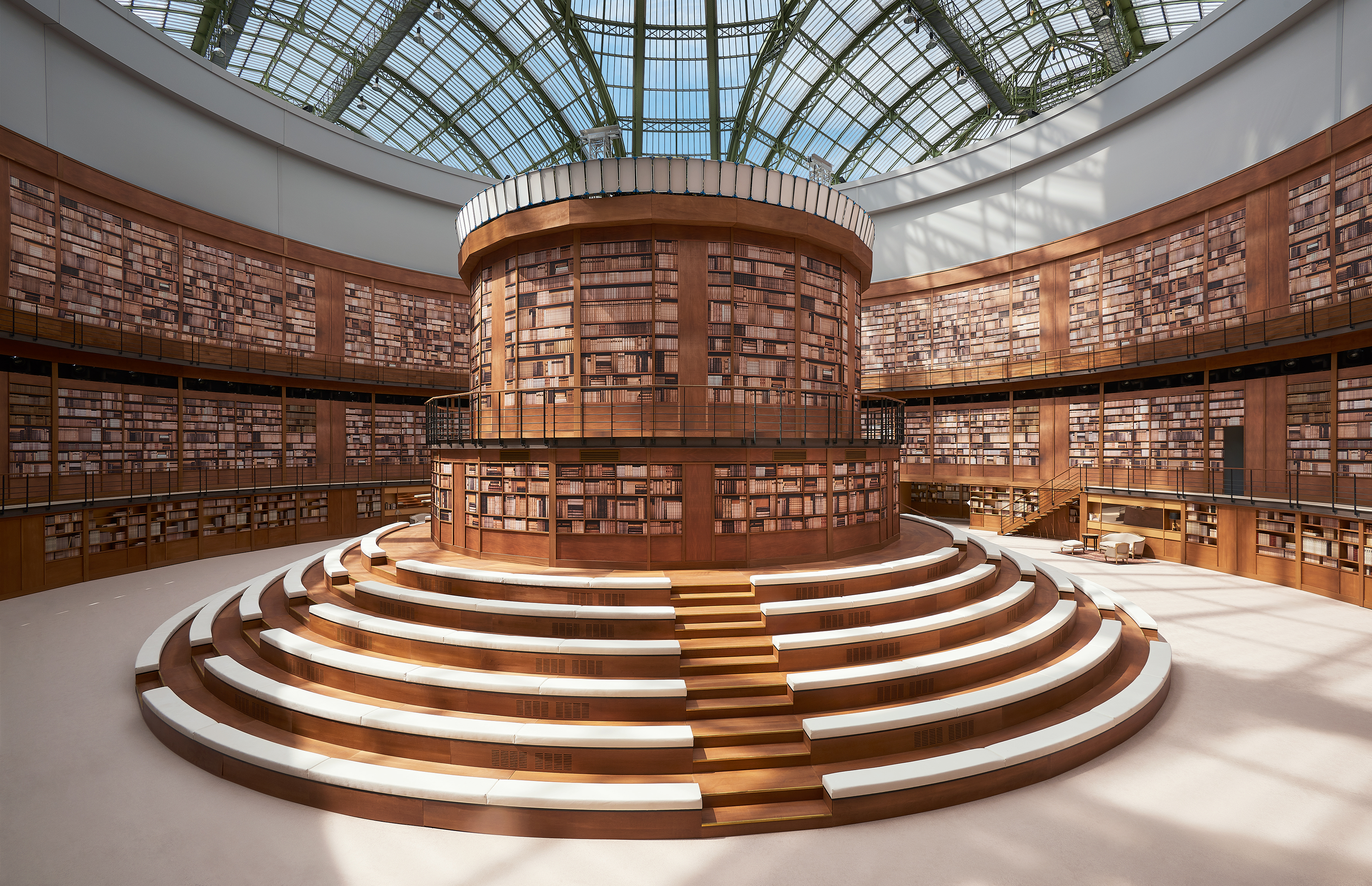 Against this literary landscape, Viard brought to life her vision of the Chanel woman; a quieter, well-read and slightly more subdued woman, a woman who is cultured and eager for poetry and novels. She wears slippers and pumps with a satin bow, or black patent leather loafers and little glasses. “I dreamt about a woman with nonchalant elegance and a fluid and free silhouette; everything I like about the CHANEL allure,” explained Viard. This chic nonchalance was evident in a collection which felt a little more sombre but superbly refined; the long, sophisticated line of the 1930s the dominant silhouette.

Contours were fluid, loose and lithe, accented with a belt or bow (of which there were many), with lines clean and predominantly graphic. Tweed coats were as soft as robes, long and voluminous. Jackets became boleros or bombers with both rounded and pointed shoulders and finished with officer collars or small quilted collars. Trousers were cut wide and high-waisted, some feather-hemmed. Dresses alternated between long and languorous and full and flared. The were negligees in coral chiffon, draped radzimir and a dress with Karl Lagerfeld’s writing artfully embedded into sequinned embroidery; a touching tribute to the luminary. 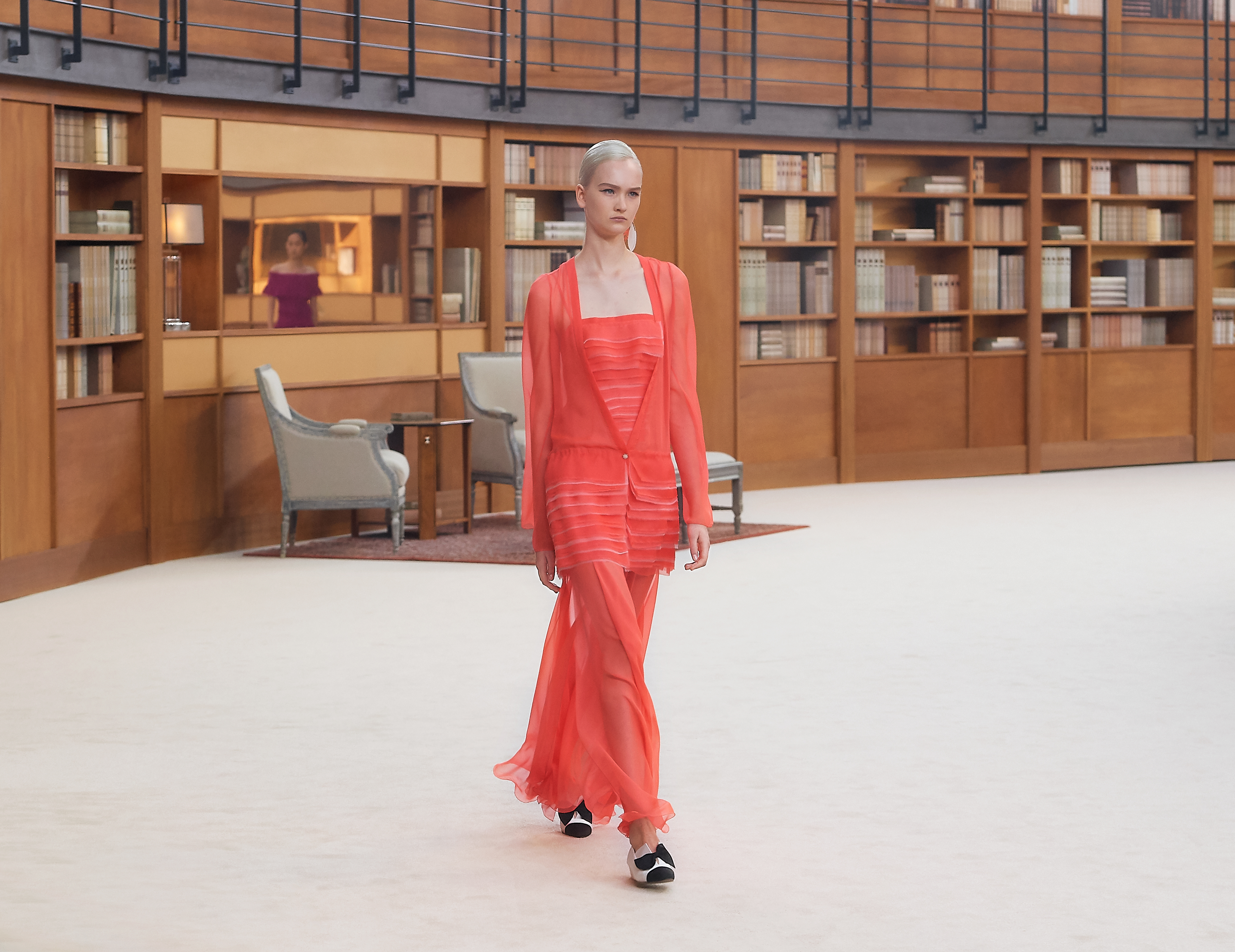 While details were decidedly cerebral, taking a page out of their surrounds, buttons spliced frocks vertically crawling up the backs of strapless dresses like the spine of a book. Embroidered fabrics were layered, emulating pages out of a book, drawn out with a godet or split with pockets. The girls wore delicate metal-framed reading glasses, and in place of the classic ballerina pump, they walked in soft slippers. As always, the savoir-faire of the Haute Couture ateliers were honoured throughout with deft details; purity sets off the bias, border cuts along the straight grain of duchess satins and intricate double-sided fabrics. While a sobering palette of black, white, navy blue, honey, plum and burgundy was livened with bold splashes of pink, fuchsia, blue, green and orange, plus streaks of silver and gold. 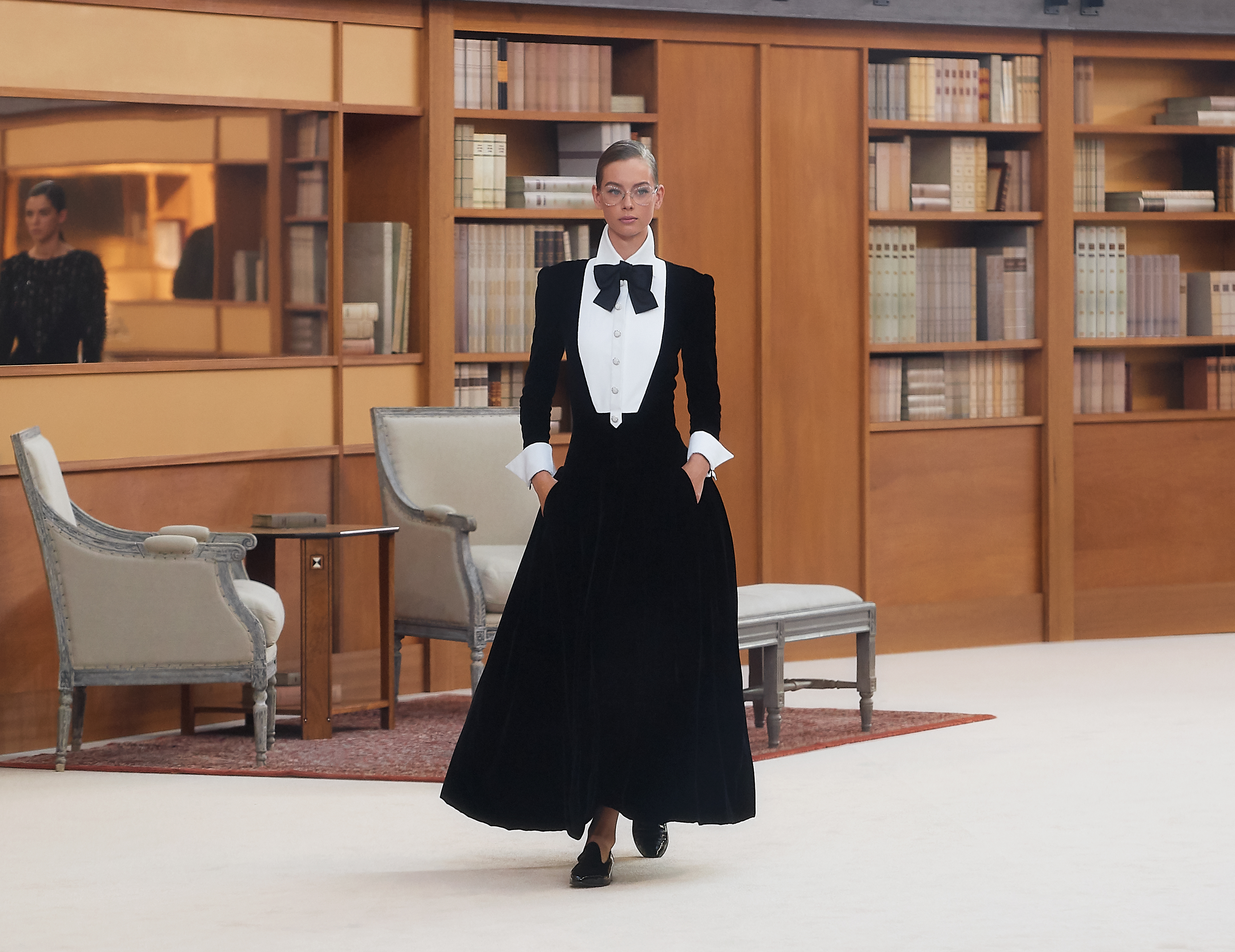 But along with its classic codes, the collection held the ’30s in balance with the now (and a hint of the ’80s); a deep thrust of hands in pockets an indicative gesture of current times, and perhaps of Viard’s bold new direction. Boundaries of indoor and outdoor dressing were blurred, with Viard making a compelling proposition for sheath dresses in scant lace to be worn out the door, warmed by little bomber jackets embroidered with flowers made of feathers, and dresses veiled with capes or coats in silk tulle. But perhaps the most telling symbol of this new chapter was the bride, typically dressed up in the most fantastical creation, Viard’s bride was dressed down; she wore pyjamas and a robe in pale pink satin, pleated and embellished with plumes, it was as if she was ready to hop into bed rather than close a famous couture show.

A new story for the Chanel woman, we eagerly await the next chapter of this fabled, fashionable tale.