Designed in one day on a park bench in Washington Square Park, Daniel Roseberry sketches Schiaparelli's entire couture collection on paper - and here, on the page, it remains 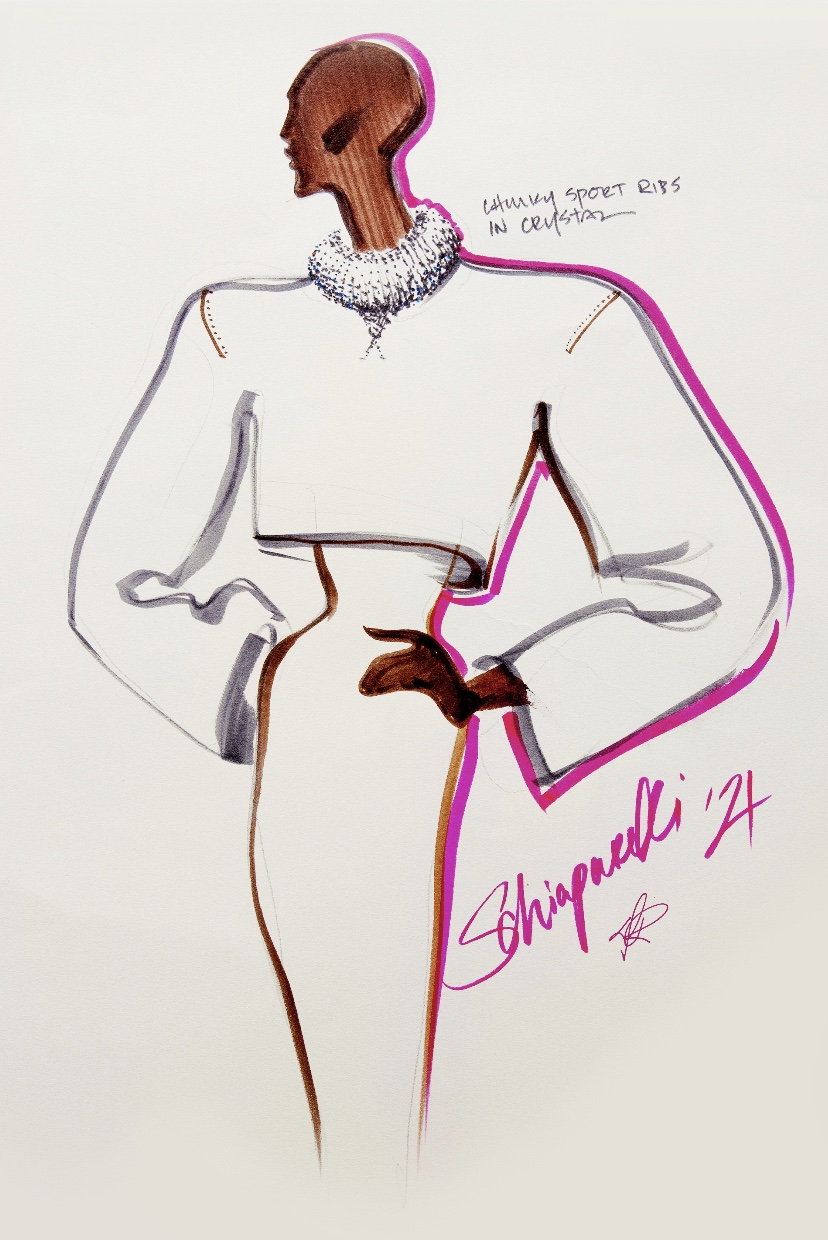 “On June 29th, 2020, I woke up early, got ready in my New York apartment on 12th street, put on my mask and headed outside to face another day of life in quarantine,” wrote Daniel Roseberry, Creative Director of Schiaparelli.

“Three months ago I was marooned in New York while taking a quick trip back to the States. Since then I have been living in isolation while Maison Schiaparelli took a hiatus. Everyone has their own lockdown story, some harrowing, some tragic, some utterly lonely. The luckiest of us have been able to spend this time in nature, far removed from city life. My own experience was shared with millions of other Manhattanites: It was privileged, but nothing extraordinary. What was extraordinary, however, was the ability to walk into Washington Square Park on a Monday morning and sketch out an entire Couture collection.”

Extraordinary, indeed. When constructing couture, the forethought alone is a daunting task. The preliminary planning in one’s mind inevitably lays the groundwork of what is to come; the idea, the dream, often most difficult. But after the idea germinates, an even greater task lies ahead: months of meticulous handicraft and hours spent realising this dream. In fact, couture is quantified on this very premise; custom-made pieces that require a certain amount of hours spent on craftsmanship. This is what distinguishes haute couture from ready-to-wear. 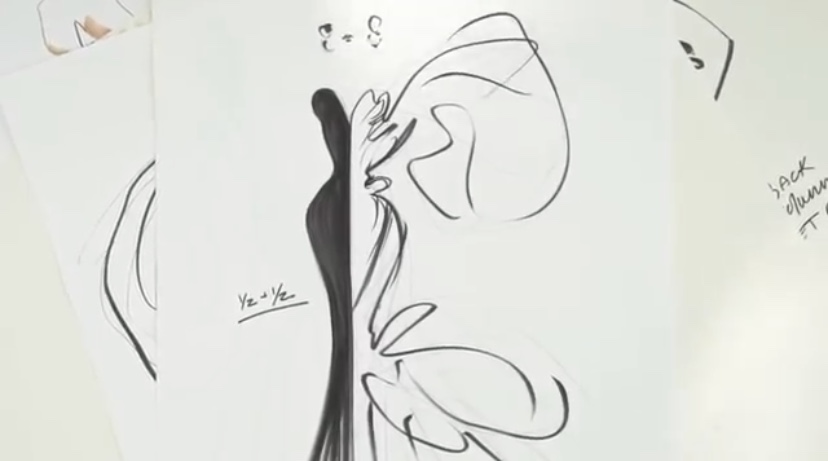 These throttle of the Coronavirus pandemic has not only changed the fashion industry but the world as we know it. Today, Roseberry opened a very different digitised Couture Fashion Week, the first in its history. But even the oldest and purest exposition of fashion design needs to adapt and adjust to a changing world, and Daniel Roseberry knows this.

“Life today is lived according to opposites; the pandemic has inverted everything we knew. Now, instead of a team to execute this collection, I just have my own imagination. Instead of the Place Vendôme in Paris, it’s been designed and sketched on a park bench.” And it is here where Schiaparelli’s couture collection concluded. On the page of Daniel Roseberry’s sketchpad, in the middle of Manhattan.

Since assuming Schiaparelli’s creative post just over a year ago, it’s been no secret Roseberry loves to draw. His debut collection for the Maison was perhaps as blatant a declaration as one will get: a blackened room, an artist’s drafting table and a blank page. As he sketched, his drawings became real life; chartreuse sateen trains and clouds of Shocking Schiap pink taffeta whizzed past, his designs quite literally jumping off the page.

Then, during lockdown, another glimpse at Roseberry’s brilliance with pen and paper in hand – and perhaps the biggest clue of what was to come today. “Thumbnails in a sketchbook, notes on a napkin or a doodle on an airplane, these humble creative moments happen when you least expect them,” the House wrote alongside a series of doodles, some scrappy, others scrupulous. “However insignificant they may seem at first, they can become couture magic when brought to life by the atelier. For creative director @danielroseberry, the design process begins and ends with a pen and paper and the solitary act of a simple drawing.”

Today, it ended exactly here, as the House presented its Haute Couture Fall-Winter 2020/21 collection on the page. Via frenzied strokes and intense colour, the inherited impulse of Elsa Schiaparelli was manifest. Her beautiful chaos became Roseberry’s beautiful chaos, and how glorious it was. “This collection is a tribute to that impulse to create,” he mused.  “Everything has changed, but imagination, and the drive to create, has never been more relevant, or more profound.”

Indeed, the graphic surrealism of the Italian coutieuer’s ’30s universe was heightened, shapes were “disobedient”, volume impossible, a kind of couture that knew no bounds. It was Schiap’s absurd beauty brought to life – or rather, the page – by the masterful, brilliant flick of Roseberry’s wrist. Distorted and inverted and impulsive, much like the reality we’re faced with today.

“It’s also why the world of Schiaparelli has never felt more reflective of our time. Elsa’s commitment to the surreal, her fascination with inverting our everyday reality, has never been more timely. This collection is full of tributes to her work and her obsessions, done in my way, on new terms.” 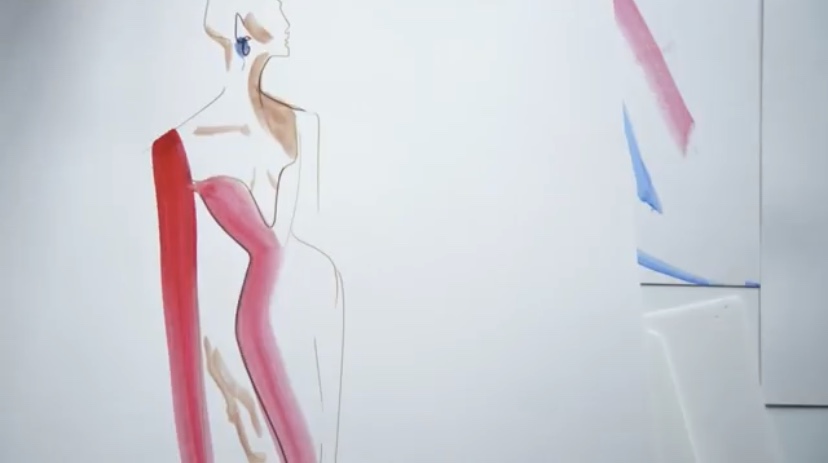 With couture a tactile métier, and travel sanctions putting Roseberry thousands of kilometres away from his atelier in the Place Vendôme, it made sense to present a collection on a page. And while it may be an “imaginary collection”, Daniel Roseberry hopes one day, in the immediate future, his imagination will be realised.

“Someday very soon, I will venture back to Paris and hand these styles off to the Atelier. We will make a portion of these and take them around the world to share with our valued clients and stylists,” he concluded.

“Imagination and dreams can be profound, but they are even more so when they guide us into action. Without putting our dreams into practice, these abstractions would be denied their ultimate power.”