At P&V Wine and Liquor, a new model for an age old dilemma: what to drink next 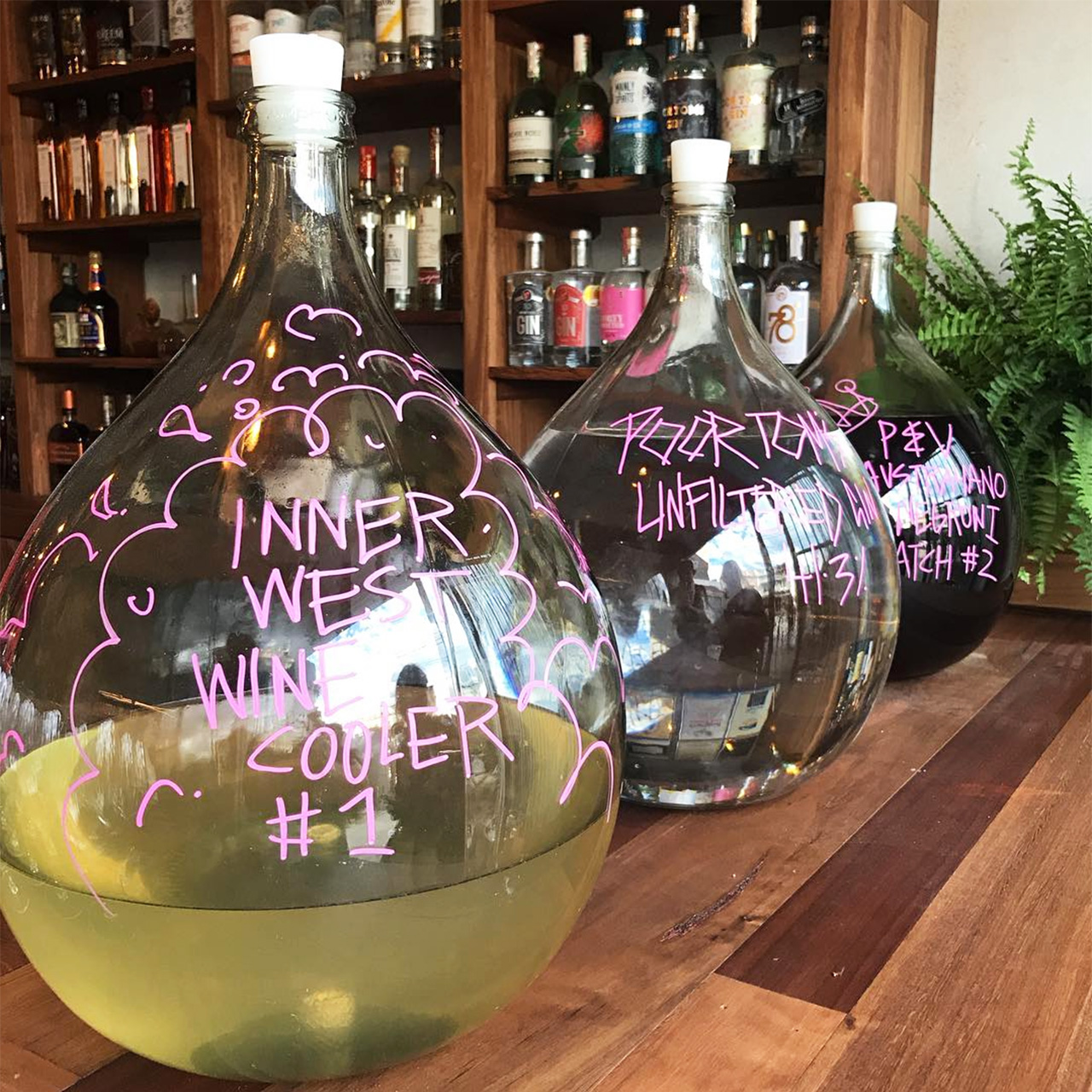 P&V Wine and Liquor is not a bar, but if it were one, it would be a contender for one of my favourite in recent memory.

“We never intended to [open a bar],” says Mike Bennie, one of the four proprietors behind the recently-opened collaborative venture on Enmore Road, alongside Jake Smyth and Kenny Graham, the co-founders of Mary’s, The Lansdowne and The Unicorn Hotel, and another Mary’s original, Lou Dowling. “The first time we sat down we said, ‘what are we going to do together, because we don’t want a bar.’ We wanted a takeaway venue that has other functionalities, [one] that’s distinct from other shops.

“[So] we’ve drawn on each others’ strengths to project what we felt would be the best reflection of a new age wine, beer and spirit shop.”

So, if not a bar, then that’s exactly what P&V is: the multi-faceted sum of the many passionate parts of four singular figures within Sydney’s after-hours, food and wine scenes. A bottle shop for a new age that looks, feels and tastes unlike any of those homogenous warehouse offerings to which you’ve grown accustomed.

One year ago, the four sat down and talked about their likes and vision for the space. The finished result, opened earlier this month, is a measured reflection of each party: intrinsically focused on natural wine, artisan spirits, craft beers and good food. “There are other people who are doing that, but perhaps it’s not as curated as it is here or [they’re] not as militant about the product,” says Bennie, one of the co-founders of the natural wine and sustainable farming festival, Rootstock. “That’s now written into our license; we had to define those [terms] and now we’re held to that.”

That means the shop’s shelves are necessarily stocked with the best locally produced natural wines, beer, cider and spirits, curated with an emphasis on affordability, small batch producers and supporting community iconoclasts. The only exceptions to that rule are tried and tested favourites favoured by each of the P&V founders: Jack Daniels, Melbourne Bitter and Resch’s amongst them, those crowd-pleasing aberrations which “lend colour to the space,” Bennie says. “It’s the stuff that you drink when you knock off work,” adds Dowling. “Or when you’re starting work”, Bennie replies.

P&V’s emphasis on not only supporting Sydney-based producers but those from around Australia is emblematic of a desire to support what Smyth calls “our family. Our brothers and sisters and mates and drinking partners and partners in crime, [both] medium and full-bodied.” There’s also an element of international cultural exchange at play, with those producers featured whom Bennie visits with on semi-frequent research trips to Europe also holding pride of place on the P&V shelves. It’s an idea echoed in a multi-purpose space upstairs that the wine journalist and producer hopes to use as a venue for trade tastings, food programs and a forum for education that will be auxiliary to the action taking place in the shop front. “We wanted to have a shop that gave people the opportunity to take home the things they only drink in bars and restaurants,” he adds. “And now we have a spot for them.”

The P&V site – speculated to have been a former methadone clinic and an unemployment agency alike – is divided into sections that, true to form, buck convention: there’s a prêt-à-porter section of cans and regularly rotated ‘park wines’, or the kind of textural whites, rosés and chilled reds that are best consumed cold with friends at home or al fresco; a section reserved for Junmai-saké courtesy of the specialist importers Black Market Saké that sits above an area of the open fridge that’s reserved for what the P&V team are billing as ‘TV Dinners’ – readymade meals executed with a 1970s attitude in mind but to thoroughly 2017 standards by the team at Mary’s commercial kitchen. There’s a butterflied roast chicken with herb butter, lemon brined spatchcock, BBQ packs and black lentil dahl to cater for vegetarian and vegan requirements. There are also ample baskets with mixed citrus, some home-grown in the adjacent courtyard, and a selection of fresh herbs and cucumbers perfect for homemade cocktails. A corner of the shop is also devoted to amaros, aperitivos, vermouths and vin jaunes. Ice is made in house too, on nothing less than a state-of-the-art Hoshizaki ice machine.

The remainder of P&V is organised in the manner that you might ordinarily expect of a bottle shop – by grape variety, country, region, category. It’s not the language of people who drink regularly, says Bennie. Everything is organised by style, from wines of power and presence to medium weight textural reds, light fresh reds, rosés and into the orange and white wines, including a very appealing fridge of pétillant-naturel – or sparkling – wines.

“Rather than pigeonhole people into having to do guesswork, it’s a simple common language about wine [to make] things simple for people to make decisions,” says Bennie.

“It’s also [a good way of] getting rid of those perceptions as well,” says Dowling, whose history of working in the group’s venues meant she’d often encounter people with staunchly fixed ideas of what they will and won’t drink based on outdated notions of how a varietal will inevitably taste. In an era when so much of our wine education takes place in retail environments or on wine lists that reduce varietals into often reductive and exhaustively large categories that ignore many, if not most, of their complexities, the opportunity to broaden peoples’ understandings is a responsibility that the team relish and don’t at all take lightly. Nevertheless, “it’s so exciting,” says Dowling, to have the opportunity to open countless eyes to the world of chardonnay outside what’s simply buttery or oaky. “Mirroring a restaurant wine list, as far as language is concerned, is really important in terms of our communication with the punter,” adds Smyth.

Another significant departure from the bottle-o model as we know it sees P&V function as something of a community incubator. Dowling is not only utilising her own skills behind the bar, but convening with local businesses to create large-batch cocktails that will be available in sizes from 365ml to two litre growlers. The Marrickville-based distillers Poor Tom are creating two bespoke gins for the venture’s launch: one, a London dry style gin will be unfiltered, resulting in a cloudy finish; another will be a bespoke summer gin – an offering that will change seasonally.

Further collaborators are yet to be announced, but there are some promising avenues in the work with nearby distillers, breweries, restaurants, speciality providores and bars alike. In the days before its opening, The Adelaide Hills Distillery’s Bitter Orange Italian provides the background for an Australian negroni displayed on the counter in three bulbous demijohns. Dowling is most excited, however, about the chance to espouse the merits of rare offerings you’re unlike to find elsewhere, like a golden-hued Belgrove Rye Whisky from Tasmania. Wine will also be available to takeaway on tap with Bennie’s own label Brian, made in Tasmania’s Tamar Valley since 2012, making a long-awaited return on occasion of P&V’s opening.

“It’s like the ultimate playground for what we want to drink,” says Bennie. “You can feel it was just the thing that the neighbourhood needed. It’s palpable.”

“They’re not just neighbouring businesses,” adds Dowling. “They’re our friends.” As for the name, it’s Dowling’s laugh that gives her away her involvement in that defining trait.

“That was my brain-fart. P&V stands for ‘piss and vinegar’. That’s what we’re peddling – it’s fancy vinegar. It’s from a song by the band Against Me, they’re one of my favourite bands. I was listening to the song and it was just like, ‘oh yeah!’ That’s it. Plus, there’s three guys and me.”