Every Australian woman has a distinct memory of her first MIMCO purchase. For me, it was a pair of diamante-encrusted stud earrings given to me on my 15th birthday. The first time I wore them felt like a rite of passage into a world of style and luxury that I’ve never wanted to leave since. It’s this precise magic that has allowed MIMCO to assert itself as one of our country’s most loved accessories and fashion brands—now, remarkably, celebrating its 25th birthday. To mark this milestone achievement, the brand is releasing a coffee table book MIMCO: Past, Present, and Future, as well as a birthday capsule collection, re-issuing iconic shapes from the last quarter-century.

“At the very beginning, MIMCO was a little brand that had this great stuff,” says Emma Balfour, the veteran Australian supermodel who appears in the Darren McDonald-lensed 25th birthday campaign, alongside Charlee Fraser and Vi. “It was still emerging, but I thought it was cool. In the first campaign, I wore my own T-shirt. Then there was a shoot outside Melbourne where we drove in the dark and just arrived at this magical garden.” Shots of Balfour, who was first photographed for MIMCO by Max Doyle in 2005 (in a stroke of serendipity, the pair had met before when Doyle was assisting Balfour’s then-boyfriend, David Sims), appear as part of a collage print on a silk scarf and hat as part of the birthday capsule. “I’ve been on a T-shirt before, but I’ve never seen myself on a hat or scarf!” Balfour jokes.

First launched in 1996, MIMCO was the brainchild of Amanda Briskin-Rettig, then only 24 years old, and with no formal design qualifications. Briskin-Rettig faced the conundrum so many future designers find themselves in: she desperately wanted a functional handbag that was stylish, and not in the homogenous style that dominated the market in the late ‘90s. She went on to craft not only one, but six, which became MIMCO’s first collection. “Thanks to my parents and how they raised me, I had the gumption to try, and never thought I couldn’t [try],” says Briskin-Rettig now. As for the name? It was derived from a childhood nickname, Mim: Mim’s Company, Mim’s Co., MIMCO.

That first collection quickly found an audience among style-savvy Australian women, beloved for its mixture of high-quality leather materials, statement hardware, and subtle design quirks. Within a year, they had launched in America. Soon after came the brand’s first boutique, on Chapel Street in Melbourne, then a partnership with David Jones, and, eventually, stores in Singapore, Ireland, and the United Kingdom. By 2007 there were 17 standalone MIMCO boutiques, and 34 retail spaces in David Jones stores nationwide. “I vividly recall when the MIMCO store opened its doors on Oxford Street in Sydney’s Paddington because I splashed out and bought myself a little evening bag for the numerous weddings I had on that year,” says Kellie Hush, the former editor of Australian Harper’s BAZAAR, and editor of MIMCO: Past, Present, and Future.

MIMCO’s steady ascent into the cultural zeitgeist exploded in 2002, when Manhattan’s best-dressed sex columnist Carrie Bradshaw toted the brand’s ‘Panda’ bag during an episode of Sex and the City. In the Noughties, there was hardly a more coveted seal of approval. By 2004 MIMCO were staging their first Australian Fashion Week runway show, a nostalgia-fest with appearances from future supermodels Miranda Kerr and Samantha Harris. “This seems like a lifetime ago!” says Kerr. “But I remember [this 2005 MIMCO] show well because of the unique styling—it wouldn’t have been easy styling a show that was all about bags and jewellery, but Amanda [Briskin-Rettig] did an amazing job. It’s exciting to think that this small Melbourne brand would go on to do such incredible things.” Samantha Harris echoes Kerr’s sentiments. “I remember being very nervous… because it was one of my first runway shows,” she says. “But Amanda [Briskin-Rettig] was so lovely and calming.”

The following year, Briskin-Rettig would strike gold once again, crafting the now-ubiquitous ‘Button’ bag. An enthusiastic thrifter, she was struck by a bolt of inspiration on a trip to the Clignancourt flea market in Paris. While there, she came across a haberdashery store that sold—among other things—an eclectic collection of buttons. There, she found a massive blue button, which became the basis for the top-handle tote that tens of thousands of Australian women carried for the next decade. The idea was to update the classic doctor’s bag shape with the addition of the oversized button motif, as well as thick contrast piping, and large side pockets. The end result was a roomy bag that could be worn everywhere—“big enough to carry your life around in”, as MIMCO puts it. The shape proved a runaway hit and was updated season after season, evolving from the classic black and tan shades to include bold leopard print, bottle-green leather, and quilted iterations. This year, the brand will re-release the iconic shape with discrete updates for 2021. It’s perfect timing, considering that a Y2K fever has taken over the fashion industry. 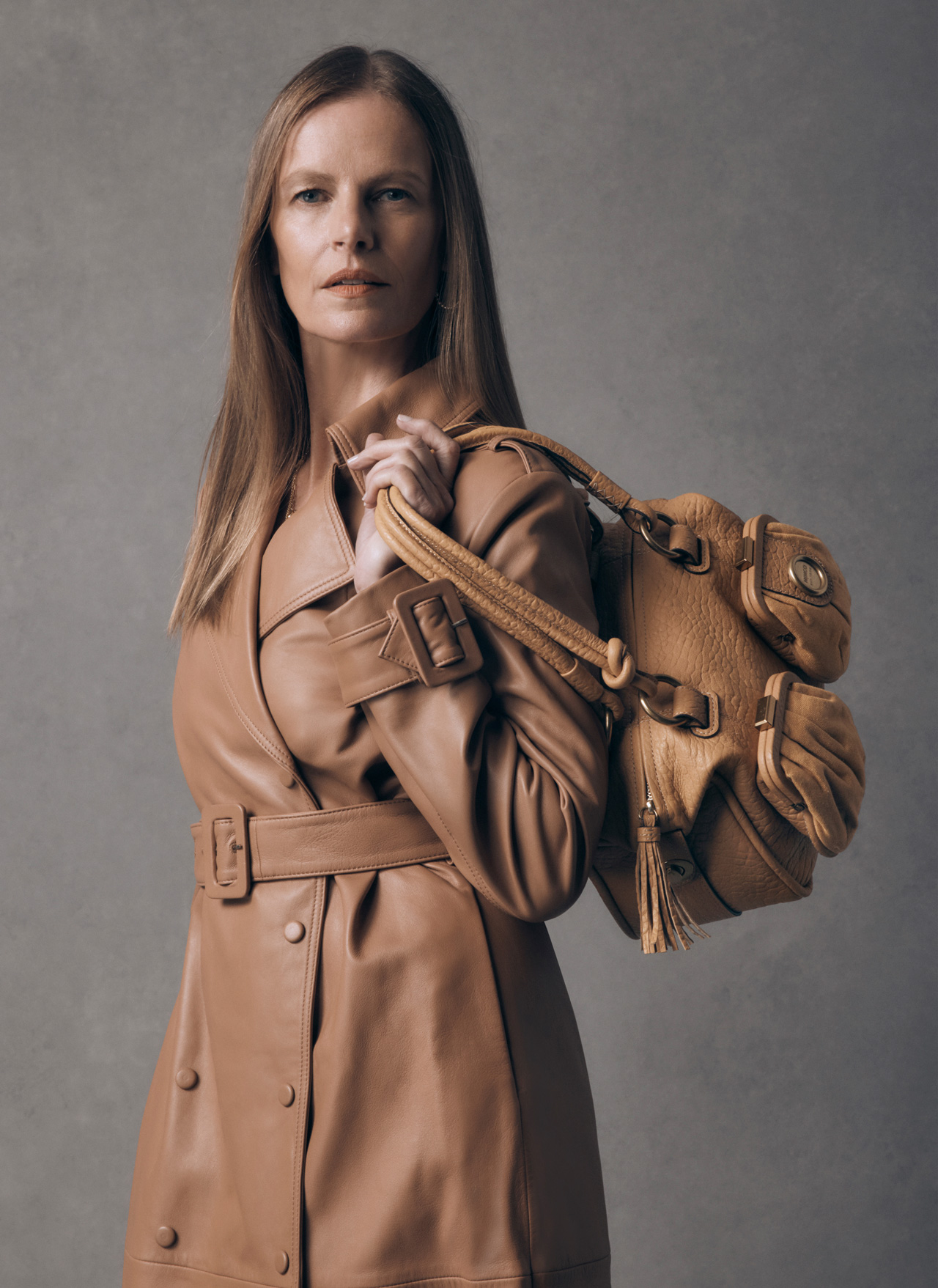 In 2007 MIMCO was sold to Witchery Holdings (and later, in 2012, to the Country Road Group), marking the end of Briskin-Rettig’s tenure with the brand she created. “I am happy that there is a legacy that remains stable and successful and one that our sons can see still thriving in the Australian fashion, retail, and online landscape,” she says now. MIMCO’s mid-Noughties expansion coincided with the introduction of new cult accessories, including shoes, jewellery, purses, scarves, and hats. “From the intricate hardware on each bag to the inspired fit-out of every store, quality and individuality are at the heart of everything we do,” says MIMCO’s managing director Sarah Rovis.

Continued national and international expansion coincided with a growing commitment to ethical causes. In 2014 the brand partnered with Ethical Fashion Initiative, a body that connects artisans living in marginalised communities around the world with global lifestyle brands. Collaborations between MIMCO and EFI have provided work for 1,400 artisans worldwide, 86% of whom are women, focusing particularly on partners in Kenya and Haiti. In 2016 the brand sought out fledgling domestic violence charity Our Watch, with who they have partnered on multiple capsule collections and campaigns. In 2020, MIMCO donated 100% of all profits from sales on International Women’s Day to Our Watch, collaborating on a campaign to combat domestic violence with activists including Rosie Batty and Khadija Gbla. HERproject™, a global initiative that works to empower female workers in low-income countries and industries through programs that improve their health and financial independence, is yet another MIMCO partner.

Brand collaborations with the likes of Barbie and M.A.C, and an ongoing collaborative relationship with the National Gallery of Victoria (think: capsule collections inspired by the art of Keith Haring and Jean-Michel Basquiat) have only further cemented MIMCO’s place in the Australian fashion zeitgeist. While their commitment to sustainability, ranging from crafting pieces with repurposed apple peels to fitting out the lining of their handbags with material created from recycled plastic bottles, showcase a forward-looking approach that all but guarantees another 25 years in the business. “Fashion is a visual medium and being able to dive into MIMCO’s history via thousands of images and seeing how a brand evolved has been a privilege,” says Hush. Thankfully, it’s a privilege the rest of us can access too. The Past, Present, and Future capsule collection is a proverbial walk down memory lane, with pieces ranging from ‘90s-style baseball caps to beloved jewellery shapes from MIMCO’s vast archive, to, yes, a reissue of the iconic Button Bag. You can shop our edit of the best pieces from the new collection below, and get your hands on a copy of MIMCO: Past, Present, and Future here.