Plus the products she tests on boyfriend Michael B. Jordan

As a woman envied by the entire world (still devastated that Michael B. Jordan hasn’t fallen in love with me), it only makes sense that Lori Harvey would possess such a luminous visage. But as the star revealed in a recent video, she hasn’t always had the clear complexion she has now. “I’ve always been really obsessed with having super hydrated and glowy skin, but when I was younger I didn’t really know what to do our how to achieve that,” she explains, as she starts her routine with the Eminence Organic Skin Care Stone Crop Hydrating Mist ($69).

Harvey reveals her lack of know-how caused her skin to break out as a teenager, which led to her interest in skincare – a hobby that’s about to become a full-time gig, as the 24-year-old revealed that she is set to launch her own line “very soon”. As the model applies a daytime serum with vitamin C and hyaluronic acid, she shares that her inner circle were her product guinea pigs, including boyfriend Jordan.

“I tested all my products, of course, on myself, but I also tested them on my boyfriend – he has become my live test model,” she says. “So now he’s very into his skincare routine as well, and he tells me all the time that when he’s on set, the makeup artists compliment his skin now.”

After applying another eye cream from her own brand, Harvey slicks on the famed Laneige Lip Glowy Balm in Grapefruit ($32) and preps for makeup with Laura Mercier’s Pure Canvas Primer ($59). Then, using a trick she learned from a makeup artist friend, she powders her face with Laura Mercier’s Translucent Loose Setting Powder ($59) because it “makes my foundation go on super smooth and flawless – with no pores, like glass, all day.”

She then sets with the classic Urban Decay All Nighter Long Lasting Makeup Setting Spray ($55) before applying a mix of two Giorgio Armani’s Luminous Silk Foundation ($105) shades. Harvey then lightly contours with Fenty Beauty’s Math Stix Matte Skinstick ($39) and conceals with the iconic NARS Radiant Creamy Concealer ($46), before baking under the eyes and in her T-zone with the Laura Mercier powder again.

After filling her brows in with a powder and a gel, as well as highlighting under her brow bone, she swooshes over her face with NARS Bronzing Powder ($58). Then it’s on to eyeshadow, with Urban Decay’s Naked Heat Eyeshadow Palette ($83)for “bronzy, brown, taupe, nude” shades. Harvey’s “favourite” NARS Blush ($46) is then swirled across her cheeks, with a Patrick Ta lipliner and Pat McGrath’s LUST: Lip Gloss ($46) creating a plump pout.

A touch of Tom Ford’s Sheer Highlighting Duo ($126) adds radiance, before Harvey finishes with her “little secret” – Anastasia Beverly Hills’ Dewy Set Setting Spray ($47) which she delicately taps over her skin using a beauty sponge. “It really gives it an extra glow,” she adds.

BRB, adding it all to cart (and Jordan too, if possible?). 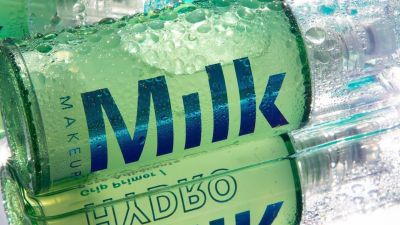 Adut Akech Has Been Named The New Face Of Estée Lauder: “To Be The Representation I Didn’t Have Growing Up Means Everything”