Here's everything GRAZIA knows about the couple's 'amicable' split...so far

Friday, February 19, 2021: Today marks the end of the rollercoaster that is—was?—the Kimye era. Kim Kardashian has officially filed for divorce from her husband of seven years, Kanye West, per a report from TMZ. The outlet’s sources describe the split as “amicable” and that the mom of four is asking for joint legal and physical custody. At the time of publication (5 p.m. EST), neither party has yet to release a public statement.

This news isn’t exactly surprising to people who’ve been following the couple’s downward—and very public—spiral over the past few months. Media outlets warned Kimye fans that this news was bound to make headlines sooner rather than later. On January 5, Page Six said that “divorce is imminent” for the couple, reporting that the KKW Beauty founder hired LA-based attorney to the stars, Laura Wasser.

If you’re new to the couple’s split, let’s break it down. Rumors about the couple having issues started circulating amid the coronavirus pandemic in and around April of 2020. “Kim and Kanye have been arguing a lot during the quarantine,” a source told Us Weekly. The following month, an insider told the outlet: “Kim feels like she needs some space from Kanye. She is trying to be a great mom, focus on law school and her work commitments, and it’s hard to do all of this without Kanye helping as much as he can.”

In July of 2020, West announced that he was running for president, which was, perhaps, the beginning of the end. Kardashian initially expressed her support for her husband’s political endeavors, but things quickly took a turn when he told Forbes that he was pro-life, an anti-vaxxer, and more controversial claims that promptly garnered the nation’s attention.

Following the Forbes interview, all eyes were on Kardashian, too, as the Keeping Up With the Kardashians star is openly pro-vaccine. A source told Entertainment Tonight, “The family is supportive of Kanye’s plan to run for president, but they don’t agree with his recent interview.” Nevertheless, the insider added, “Kim will always support Kanye, but she doesn’t have to always agree with him, and that’s what makes their relationship special.”

But things kept spiraling. At West’s first political rally just weeks later, he revealed to his crowd of spectators that he and Kim discussed aborting their first child, North. “Even if my wife were to divorce me after this speech, she brought North into the world, even when I didn’t want to,” he said. “She stood up, and she protected that child.” Once again, all eyes were on Kardashian following West’s shocking comment.

Following the event, a source told People: “Kim is shocked that Kanye spoke about North at the rally. She is furious that he shared something so private. She loves her kids tremendously and wants to protect them. Her favorite thing in the world is being a mom.”

Then, the tweets started. That same month, July, West went on a Twitter rant about the Kardashian family. In response, the Skims founder released a lengthy letter outlining her husband’s struggles with bipolar disorder. “I kindly ask that the media and public give us the compassion and empathy that is needed so that we can get through this,” she wrote as part of the message. “Thank you for those who have expressed concern for Kanye’s well-being and for your understanding.”

West apologized to his wife on social media in the days following his Twitter rant. “I would like to apologize to my wife Kim for going public with something that was a private matter,” he wrote in a tweet. “I did not cover her like she has covered me. To Kim I want to say I know I hurt you. Please forgive me. Thank you for always being there for me.” After that, the couple started focusing more on themselves and less on each other. “Kim got Kanye to go up there [Wyoming] so they could live separate lives and quietly get things sorted out to separate and divorce. She’s done,” a source told Page Six in December.

The couple got married in an extravagant wedding in Italy in May 2014, two years after they started dating. Kardashian’s split from Kanye will mark his first divorce and her third. If all progresses as planned, the pair will co-parent their four children: North, 7, Saint, 5, Chicago, 3, and Psalm, 21 months. More to come. 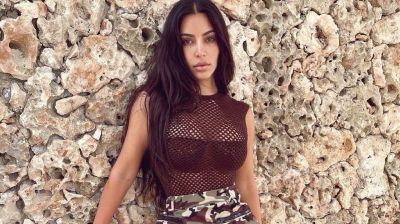