The pair have kept their romance so quiet, you’d be forgiven for not knowing Jenner was dating anyone at all

This year, it wasn’t just your friends clogging your social media feed with loved up Instagram posts for Valentine’s Day weekend. For V-Day 2021 – the first during COVID – celebrities got more involved than ever. Alongside the usual Ryan Reynolds roast of wife Blake Lively (he called her his ‘forever Valentine for the foreseeable future’) and expectedly adorable post from Barack Obama to his wife and daughters came a royal baby announcement and a few unexpected confirmations of relationships, specifically from the Kardashian-Jenner clan.

After keeping her romantic relationships notoriously private for the past few years, Jenner casually posted the below photo of her and Booker cuddling on a kitchen counter to her 151 million fans on Sunday.

A few hours later, the 24-year-old Phoenix Suns player followed his supermodel girlfriend’s lead, posting a video of her playing with his dog in the backyard with a love heart and later, a black and white photo of the two of them lying in the sun together.

Until now, the pair have been incredibly private about their relationship and, other than a few sightings of them together, we’ve had to rely solely on anonymous sources to confirm the romance. Earlier this month, a source told Entertainment Tonight that 10 months after first being spotted together, the pair are “still dating” and that their relationship works because they keep it simple. “There aren’t any huge expectations or crazy commitments on either side,” they said. “They have gotten a lot closer, but Kendall’s schedule is particularly super busy and Devin is very understanding of that.”

They also noted that Jenner is “also very much her own individual and likes her off time with family and friends and having her space.”

In April 2020, at the start of the pandemic, Jenner and Booker were spotted on a road trip from Los Angeles to Arizona together. A few months later, they were seen cuddling on the beach in August, prompting a source to tell Us Weekly that they weren’t serious at the time. “They’re hooking up, but they’re not serious,” they said. “She’s talking to a couple different guys. She has so many men after her it’s crazy.”

Jenner was previously linked to Australian NBA player Ben Simmons, who she dated on and off from 2018-2020. Meanwhile, Booker is rumoured to have dated a former member of Jenner’s circle: Jordyn Woods, in 2018. Us Weekly even reported that the couple joined Jenner and then-boyfriend Simmons for a double date.

Seemingly proving this rumour, after Booker and Jenner were first spotted together in late April 2020, Woods tweeted “haha good morning” alongside three trash can emojis, though she’s since deleted the tweet. 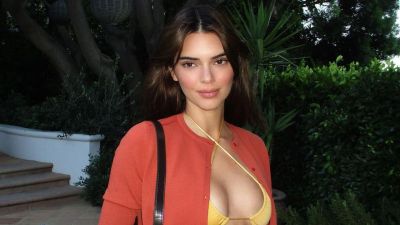